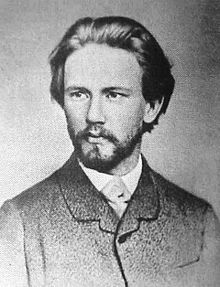 I like to think Peter (Pyotr for purists) Ilyich Tchaikovsky was a rock star in his day, but I can’t say for sure. He certainly was an attractive man. One thing I can say is that his Nutcracker score (penned not long before his death) is tacky ballet music through and through. There, I’ve said it.

I can also say that I’ve made it through the entire holiday season (as defined by big box retailers) without hearing it a single time. Woohoo!

Before you declare me a Christmas curmudgeon and banish me from the kingdom, consider this: for dancers in big companies The Nutcracker represents hours and hours of repetitive work to that familiar, overwrought score, sometimes upwards of forty-plus times in a season (roughly defined as sometime around Thanksgiving and going right up to the New Year). Elsewhere in the world it is also performed at other times of the year. Waltz of the Flowers elicits the biggest eye roll with its embellished, saccharine sweet harp intro that is almost a caricature of itself, going on and on before the familiar oompah-pah oompah-pah heralds its start in earnest (listener alert! it’s a waltz!). To be fair, I have known dancers who actually like dancing Nutcracker. Not many, though. My favorite Flowers story: Daniel Ulbricht (NYCB Principal) has been known to stand in the wings and dance the “Y-M-C-A” dance for the amusement of the corps during that schmaltzy waltz. There’s one in each ballet in Tchaikovsky’s holy ballet trinity: Nutcracker, Swan Lake, and Sleeping Beauty. Evidently there was a rule in the late nineteenth century that a very big, showy waltz had to be scored to satisfy some sensibility of the day.

In truth, though, I have a huge soft spot for The Nutcracker. From the time I was about eight and for several years thereafter my mama and I were cast together in Memphis Ballet’s version (lifted pretty overtly and shamelessly from Mr. Balanchine, as the company and school directors were Balanchine disciples)—I was in Act I, she in Acts I and II, usually in Snow and in the Chinese variation, which had continuous pirouettes she could pull off like nobody’s business. She was always a work horse of a dancer, very reliable, and I think the company director really liked that about her. For me, as is the case with so many young ballerina wannabees, it was simply magical, end to end, even the year I had flu and almost vomited back stage when I overheated in my wool felt soldier costume. I recently quipped to somebody that Thanksgiving is my favorite holiday, which is true. But my memories of Thanksgiving growing up—aside from the food and Macy’s parade and all that—have much to do with Nutcracker rehearsals, which were a galvanizing thing between me and mom, something special that unified the two of us. Sharing the stage somehow set us apart from other moms and their daughters, and we will always have that.

Another truth: there is one part of the score I really, really like, and that is Snow (Act I, Scene II)—the whole thing, starting with the Nutcracker’s transformation into a prince. It’s also a moment in classical ballet where there is choral accompaniment, which does not happen often. The Snow pas de deux, danced sometimes by Snow Queen and her prince, other times by the Nutcracker Prince and Clara/Marie, is my favorite in the ballet, too. And I must say I am sorry to have missed the fifth and final year of American Ballet Theatre’s new Alexei Ratmansky Nutcracker, which ran at Brooklyn Academy of Music and will now move to the West Coast; I can only hope for a DVD at some point, or that ABT will resurrect it in the near future in NYC.

The reality is that for most ballet companies The Nutcracker represents revenues they rely on to get them through the rest of their fiscal year, without which they could not likely exist. It’s also a great recruiting tool for the art form, not unlike all those amazing air shows the Air Force and Navy take on tour to enthrall aspiring young pilots. There is always some discussion in some corner of the world about the waning of ballet as an art form, particularly since it experienced a boom in the 70s, the likes of which it has not really seen since. I submit that there is nothing to worry about unless and until companies quit dancing Nut: it is maybe the best-ever barometer for ballet’s health and well-being.

I leave you with some silliness I like to post every single year, although I am a little late getting to it this time around. Lots going on with me at the moment, about which more later. Happy New Year! (Oh, and if you want to know the Nutcracker Truth: the versions we bring our children in droves to see each year typically bear little resemblance to the original E.T.A. Hoffman tome; there is a nice translation illustrated by Maurice Sendak worth a look-see if you are interested to know just how far we have migrated from the original tale.)