Not Noisy from Here

The metal carabiner-like clip that fastens to the harness part of Scout-the-Lab’s seatbelt is maddening, like that childhood game Barrel Full of Monkeys: just when you think you’re about to get it clipped—or unclipped as the case may be—an irksome little hook (think crochet needle) gets hung up and refuses to slip through the metal clasp on the harness. At least, when you’re trying to do it one-handedly. Scout sits there patiently waiting for his lady-human to correct the situation while she tugs and pulls his harness this way and that, cursing under her breath, or sometimes plainly for the world to hear, depending on her mood. There! she finally spits out when the damned thing does as it should. The inventor of that childhood game must be complicit with the designer of the Kurgo dog harness, I am sure of it. Good thing Scout’s long familiar with the ritual, as we repeated it countless times over the course of nine days of Way Down South adventuring.

This was Scout’s big epiphany during our Dogged Adventures: he is a Dog of the World, schooled in long-distance travel, in navigating loud city sidewalks crowded with people and other dogs, and importantly, in waiting when he is told—waiting to jump down from the car, or to jump up into the car, waiting before bolting out of the hotel room’s open door, waiting for the automatic doors to open, waiting for the traffic signal to change, and sometimes, merely waiting. Waiting is also what happens when you go to a dog-friendly eatery with outdoor seating; the best ones bring you a fresh bowl of water and give you a pat on the head. But mainly, you lie down and wait; sometimes you snap at a yellow jacket until your human warns you to stop because this pastime can only end badly for you. But in spite of being asked not to snap at yellow jackets and being made to wait, you are glad to do it, because the rewards are sweet. Smoked barbecue, for example, is completely worth waiting for. Ditto bites of succulent grilled chicken, or crumbles of a grass-fed beef burger smothered in Vermont cheddar. Call it manna from heaven, if you like—good things come to those who wait, and Scout completely gets this. 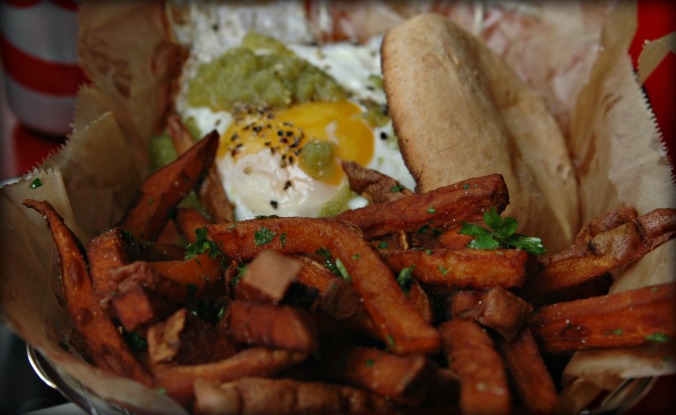 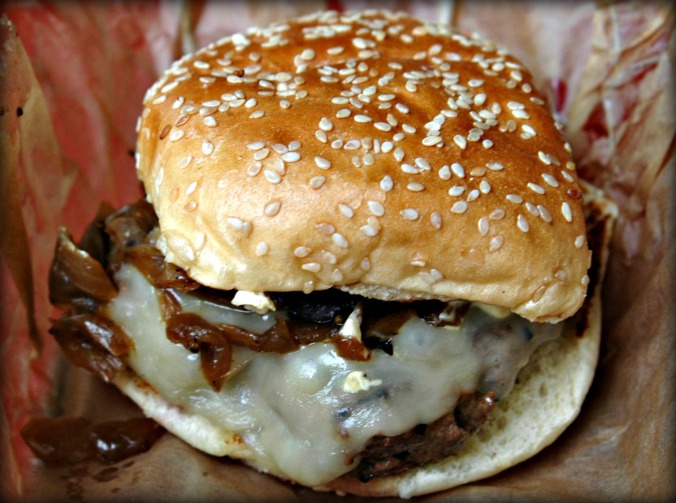 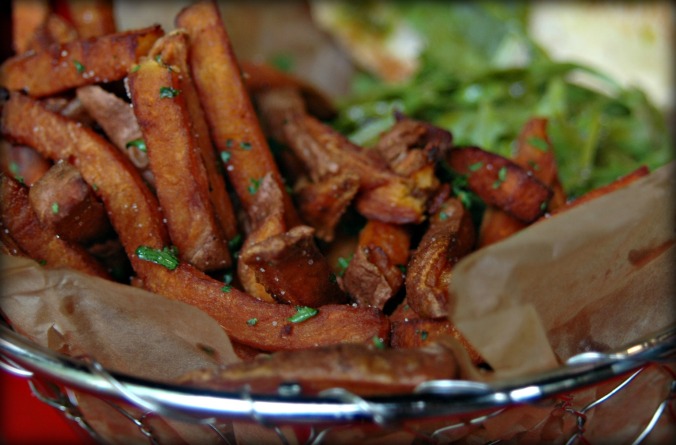 No self-respecting chef embarks on a vacation without doing his culinary homework. HCB wanted barbecue from the get-go, and he wanted the best. One of his homies down in Asheville made recommendations, and because Scout-the-Lab was with us, we opted for number two on the list (see dog-friendly eatery above). This worked out fine, and nobody was disappointed: leftovers supplied a homemade pizza topping for one gluten-free twenty-something, a couple of sammies, and general late-night noshing with the fridge door wide open at our little vacation rental. We ate it with the abandon of people off their diets and on vacation, all of it, and mopped up what was left with remnants of homemade corn bread. 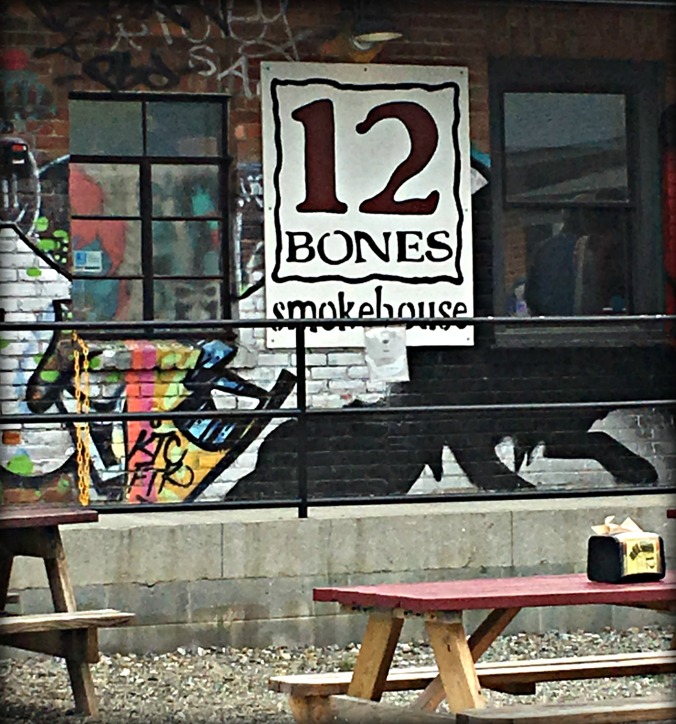 A Pie Tin Is Your Plate 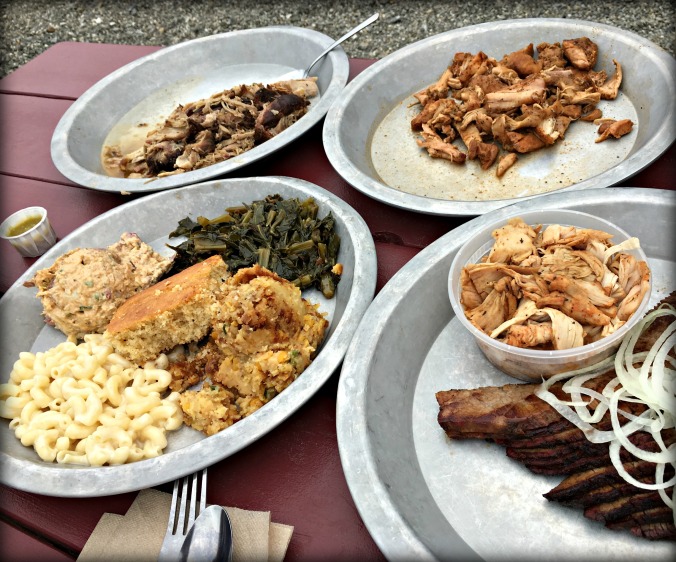 Asheville has always held appeal as a quirky but still somehow metropolitan mountain city, separated from its neighbors by, well, mountains. You kind of have to work to get there: eastbound I-40 out of Knoxville gets steep and curvaceous all of a sudden, and just when you think you can’t take any more careening up a steep, fast-moving highway wedged between a cement barrier on one side, and a long caravan of tractor trailer rigs on the other, you’re there. What struck us about Asheville on this trip is her ancient infrastructure long outgrown by the burgeoning city around it, crying out to be replaced (as the twenty-something correctly observed: because there are no turn lanes, traffic backs up for days). The seamier, industrial parts of town have elevated graffiti to high art, and damned if it does not work beautifully. We spotted an entire group of people photographing it on tripods, part of a class assignment we guessed. Downtown is fun, and treacherous, and did not slow down one jot no matter what time we were out and about. But for his part, Scout-the-Lab seemed to know exactly what to do after our excursion with him in downtown Knoxville. Dogs are amazing and resilient.

Chocolate Makes the World Go ‘Round 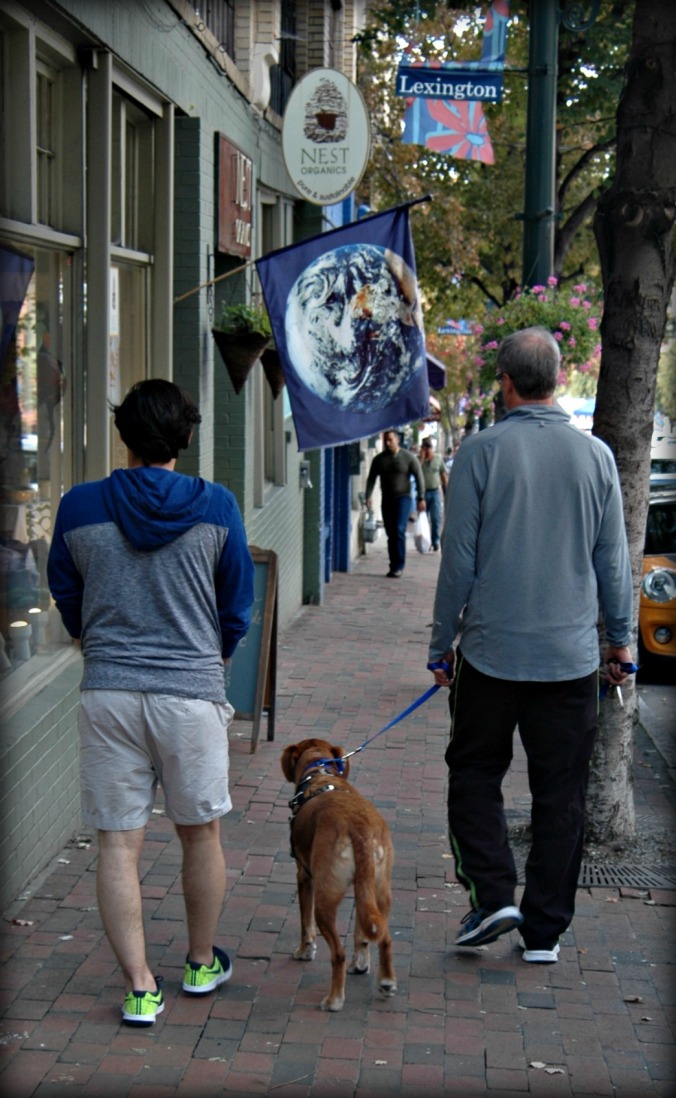 We also took a small hike from our rental (on the outskirts of downtown, and on the edge of the University of North Carolina at Asheville’s campus, as it happens) to the UNCA observatory, high atop a ridge overlooking the city. The area around it—the paved road leading up, the street lights, and a tall concrete stairway reaching from the road below to the building above—have been let go, it’s fair to say. Nor have the gardens around it seen much love in recent years, although the most determined flowering plants have elbowed their way to life in spite of the overgrowth around them: you can tell it was once really something. Meanwhile the observatory itself is still brought into service several times a year, and opens up for public viewings. We happened to be there for one which was unfortunately full, but anyway cancelled thanks to the overcast remnants of Irma. The boy said he could tell the top of the building slides open, and when we got back to our place I looked it up, and sure enough. Meanwhile, we got outside, exercised a little, and took in the incredible vistas from the top; my whiny kid said he had no interest in going, and then all of a sudden he was right there with us. Wish I had used that strategy in my younger parenting years instead of pleading, reasoning, and brow beating. Hindsight. 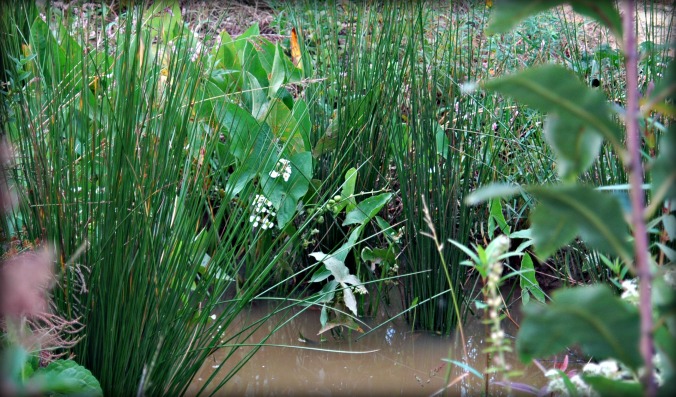 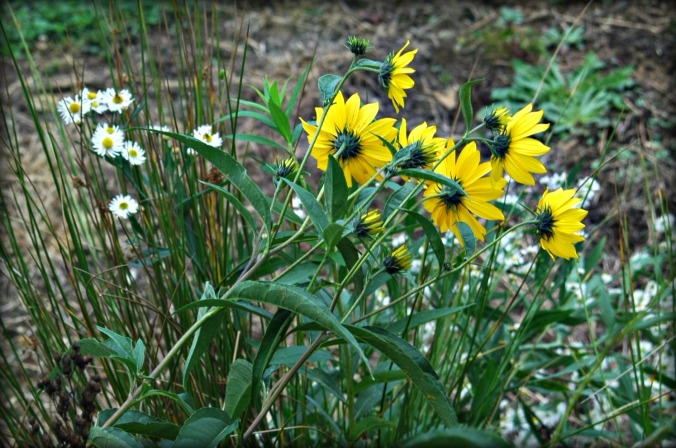 The Little Free Library at Our Airbnb 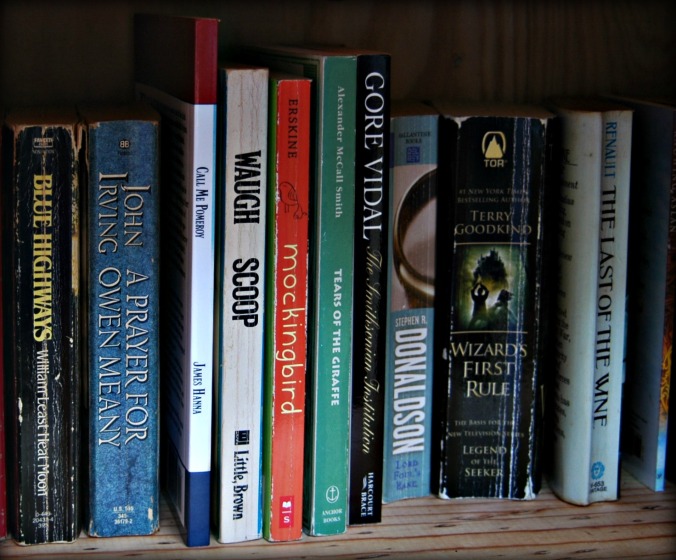 The Neighborhood Has Excellent Taste in Literature

Postscript: I meant to include this photo of my ghostlike dog-and-chef in the Knoxville post but somehow missed it. Serendipitous—I have no clue how I did it, something to do with shutter speed and the absence of light probably. It was late, we were going down stairs in a downtown parking garage. Mistakes can be beautiful, after all.