Changing your address can change your life, chirped a too-cheerful woman in a slick TV advert for planned community living.

We are long accustomed to cranking out some pretty impressive cuisine in our outdated, strapped-for-space, apartment-sized kitchen. We’ve made do using a teeny kitchen table that belongs to our landlord as adjunct counter space, perfected a risky bowl-balancing technique at the T-shaped junction of our rusty divided sink where it meets the lip of the unfortunate formica countertop, ditto the V-shaped metal dish drainer, and in a pinch have even pressed into service the flat top of our stainless steel garbage can to hold some large cooking vessel or other when there was absolutely nowhere else to put it. (Scout’s food storage bin doubles as a decent cookbook holder, I have discovered.)

But if I had to fault this kitchen for a single thing above all others, it would be its darkness. At times this vexes me enough to send me into a tailspin for a solid evening, when I can’t find my damn readers, and that on top of badly compromised eyes in the first place.

I’ve taken on the black-and-white photo challenge for the past few days, the one everybody’s doing. I decided to edit these in black and white, too, but the absence of light in our little kitchen speaks volumes through my Sunday morning biscuits in the make. That, and my inexperience with a camera. I expect more of our soon-to-be kitchen, a wide-open space with light fixtures everywhere, loads of natural light, and a pleasant collision of interesting 1936 cabinetry and storage with 2017 finishes and appliances. Yes, that change of address will indeed change our lives.

White Lily flour is the gold standard for Southern biscuits, and for over a century was milled at a factory near a familiar intersection just northeast of downtown Knoxville (the company closed its Knoxville plant in 2008 and moved operations to the Midwest). It was what everyone bought and baked with, a pantry standard along with Hellmann’s mayo and for many years, JFG coffee, if you lived in Knoxville. For a while Williams-Sonoma peddled White Lily at a stupid price in its brick-and-mortar stores and catalog; they seem to have come to their senses. Anyway, up in these parts King Arthur flour is the thing, and is what I put in my biscuits this morning.

My mama begged my great-grandmother Grace—Granny Grace—to tell us some of her beloved recipes many years ago, long before she died. I am sure Granny had recipes tucked away somewhere, but by then most of what she routinely created in the kitchen was stored in her noodle, and so she simply quoted from memory. Granny’s vagueries were maddening sometimes (‘put in about that much milk,’ said gesturing with tar-stained fingers between puffs on her ciggie, or ‘bake it ’til it’s done’). To her way of thinking it was obvious.

This morning I did a side-by-side of her biscuit recipe and the one on the White Lily bag, and dang if they’re not pretty much identical. I clipped the White Lily version from my last bag of flour, the one I schlepped all the way to Vermont from Tennessee with me. It’s on the door of the fridge, right next to my mom’s potato soup recipe—soup she routinely made and brought to me the year I was going through my divorce, when I would eat nothing else. I’ve begged her to send it to me for years, and not long ago she finally called and quoted it to me over the phone. It reads pretty much like a Granny-Grace style concoction—a little of this and a little of that, until it looks right, and cook it ’til it’s done. She comes by it honestly, anyway. And when I protested, she merely quipped unapologetically, you live with a chef: figure it out. 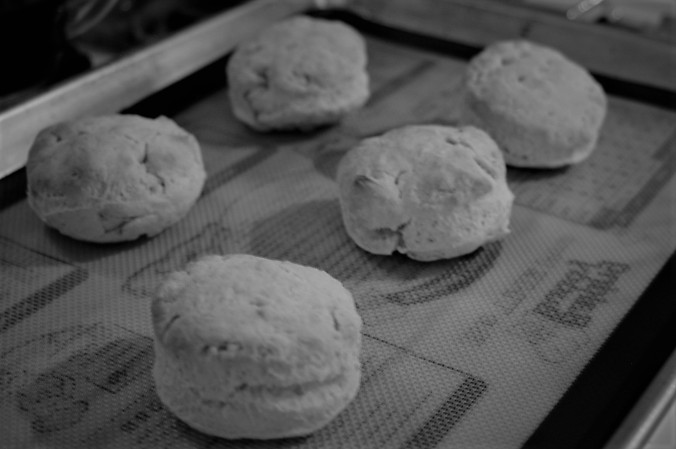 The biscuit sandwich I made this morning assuaged my days-long desire for a made-from-scratch biscuit. It was not exactly what Granny Grace would eat: in lieu of her crispy bacon, for example, mine had a leaner applewood smoked turkey slice. There was no fried egg, but instead a small egg whites omelet folded, and folded again; I did not cook it in bacon grease as she might have done, but instead used coconut oil. I schmeared the biscuit with a little bit of apricot preserves, no butter, and layered on crisp, fresh spinach, the year’s last from our favorite farm stand. I still have a few tomatoes in the windowsill that probably come close to Granny Grace’s high standards for tomatoes, and so I added a thick slice. (She would wait until lunch for hers, sliced and laid out on a plate or saucer and doused with salt, taken with strong black coffee and another smoke.) 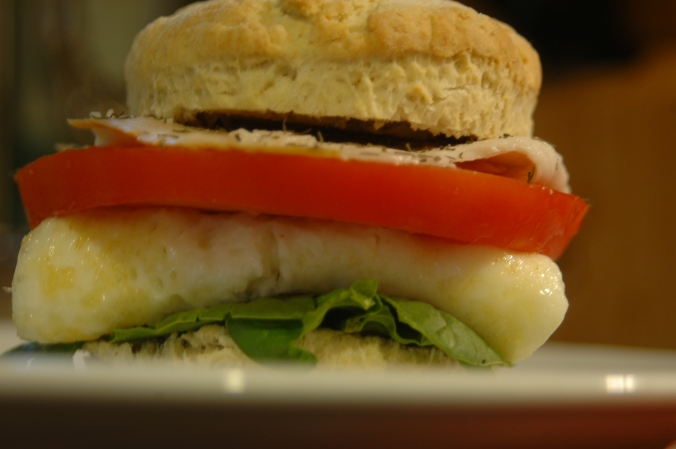 I’ll keep on making Southern biscuits wherever I live: some things should never change. And I know Gracie would agree.