Heck, I’d add super power to that list. Why not?

Somebody inadvertently rattled my cage not long ago when they suggested blogging is obsolete. I saw it float by in a comment thread on one of my social groups on the web. (I believe the precise words were, in reference to blogging, Does anybody do that anymore?) My knee-jerk reaction was outright irritation, followed by dismay and self-doubt in equal measure, but then, poof! I waved away the notion, banished it from the kingdom. The answer is, yep, people still blog. And in fact, here is a blog post by way of example <pushing up sleeves, cracking knuckles>.

I might have a few magical-charm-super-powers; blogging might be one of them. The weblog (remember whence came the word?) is simply a venue for a writer to self-publish. And anyway, writing at least something every week is a good exercise for any writer or editor. I observe the Twyla Tharp model of creating, which lends itself well to all kinds of art, including writing: the important thing is to create, and often. Some of it will be good. (Just ask W.A. Mozart.)

All of which is to say, I’ve been thinking about where I came from: my own genetic stew, and the magical powers it might hold—who gave me my mojo, however it looks?

A couple weeks ago my mama sent me a Christmas card explaining the gifts in the package she sent ahead of it. (It’s typical of her to do things in reverse order, but really no big deal—it’s just who she is.) One thing in the parcel was a small box of chocolates made by a boutique chocolatier in mom’s small upper East Tennessee town, a shop that supports a school for young orphans in Tanzania. That’s pretty nifty (and the chocolates are incroyable—there’s only two pieces left, and the Chef and I might have to fight for them). But mom’s language is what grabbed my attention and made me giggle:

All proceeds go to help young orphans in Africa. They are delicious. (Not the orphans.)

Thanks, mom, for clarifying.

I believe mom struggled some with written words when she was quite young. She may even have had dyslexia, although I am not absolutely positive about that. But her comical misspellings of words (often phonetic spellings) followed her into her adult life, a thing we laughed about a bunch when I was growing up. Despite any shortcomings with language, though, mom still held a special talisman, the one I used time and again for my own prep school writing assignments: a pocket sized, dog-eared copy of the Oxford English Dictionary, abridged—sort of a Reader’s Digest version, if you will. Its pages were tissue thin, and cardboard was showing through the canvas in a couple of places on its spine and cover.

Mom was given that and other textbooks as a young student at Canada’s National Ballet School, where she was a full-time residential enrollee in the late 1950s. The upper school English classes at ‘The National,’ as it was called, were taught in British—and not American—English. Turning to that little tome as a reference, I had to run anything I found in it through the ‘Amurican’ filter for my own prep school exercises—edit out all those vowel combinations in ‘colours’ and ‘neighbours,’ and strike those double consonants in ‘travelling’ participles. But really, who better than the English to teach…English? Mom’s English teacher was an Englishwoman aptly named Mrs. Potts. (Mrs. Potts’ own daughter, Nadia, would go on to enjoy a career as a principal dancer with the National Ballet of Canada.)

How about mom’s own mojo, language difficulties notwithstanding? I’m sure some of it came from each of her parents, but most of it, anyway, came from her mama, who parented her with the help of my great grandmother Gracie after divorcing my maternal granddad when mom was still in elementary school.

Here is an example of my mother’s mother, my grandmother Alberta Joslin’s mojo. (She was known to one and all as Bobbie,  pictured at work up in the header photo, but I affectionately called her ‘Bob Mama.’) She knew her daughter wanted more than anything to dance (mojo alert: fierce determination). But in the 1950s in Knoxville, Tennessee, there was nowhere for an aspiring young ballerina to train. Bob Mama was a hardworking medical laboratory technician at the time, a staffer who routinely drew blood from the scientists working at the Oak Ridge National Laboratory, looking for signs of radiation exposure. She was also on the faculty at a small, private nursing college in Knoxville, a wearer of many hats in the absence of her husband’s support. 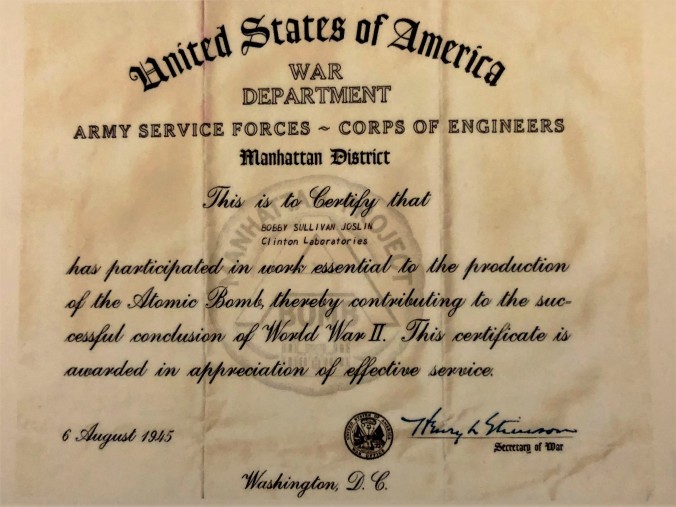 But she decided if her daughter was to have any shot at dancing professionally, she needed to find the right training for her. So my plucky grandmother got her mojo on and drove from Knoxville to New York City to quiz one George Balanchine about taking her teenage daughter into the School of American Ballet, still very much in its infancy at the time.

But on arriving in the Big Apple, Bob Mama decided it was unsafe for her daughter to live there alone—SAB had no dormitory in those days. She’d also heard of a new school opening in Toronto. So she just kept on driving until she crossed the border into Canada. When she arrived in Toronto, she held court with one of the new ballet school’s two founding directors, Betty Oliphant. (The other was Celia Franca, each of them ballet legends.) Where is your daughter? she wanted to know. Back home in Knoxville, said Bob Mama.

It took some convincing, but after Miss Oliphant made Alberta Joslin stand up and turn around—asking whether her aspiring ballerina daughter was built the same way—the fledgling National Ballet School of Canada accepted my mom as a student, sight unseen. The rest is, you know. 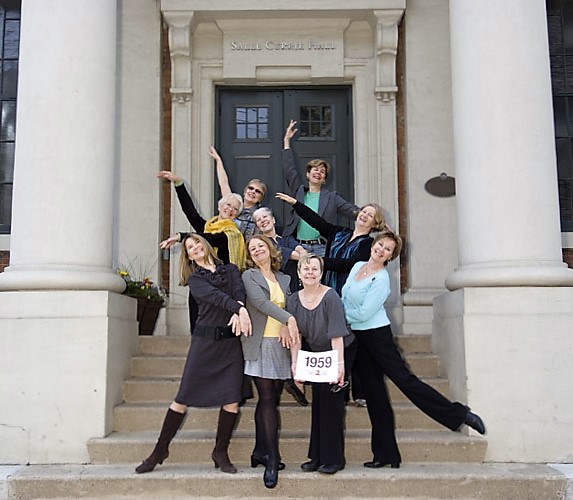 2009 at The National’s 50th Anniversary, mom in a mini skirt; photo, Timothy  A. Campbell

Well played, Bob Mama. Fierce determination is a formidable super power to model for a kid, after all. Not a bad genetic stew for this fiercely determined blogger to claim. How about you: where’d you get your mojo?

4 thoughts on “Memoir: Gettin’ My Mojo On”