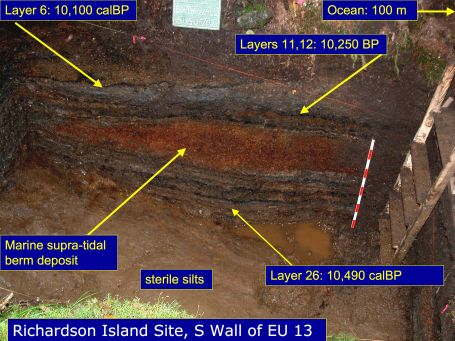 As a student of historical archaeology in the late 1980s I learned early one of the canons of the discipline:  soil is laid down in accretional layers over time, with the oldest soil (and generally the artifacts therein) to be found in the deepest layers, and the more recent soil and cultural material on top.  The result is stratigraphy, which you can see clearly in the photograph.

Pretty logical.  As bizarre as it may seem, doing legwork for the CPA to prepare my 2012 Federal Income Tax Return made me think of accretional layers—not of soil, but of events that shaped my life over the last calendar year.  And equally bizarre perhaps is that I actually enjoyed this process.  I love creating order from chaos—in this case the chaos of receipts and file folders desperately thrown into Rubbermaid tubs before my move last August with my fingers crossed that I had not overlooked any critically important documents.  And beyond that, the chaos of my life.  I take comfort in knowing exactly where I stand; makes me feel a teeny bit more in control of it, even if that is but an illusion.

When everything was said and done at tax time I was exhausted, not from the work of putting everything in order, but from reflecting on the train wreck of the last year.  If the 2012 tax year could somehow be seen as accretional soil layers, mine would look like this, starting at the top:

▪ Reaching a new terminus a thousand miles from home where I knew a grand total of three people, and saying goodbye to my son, and starting a new job where I was not the boss

▪ Signing off on a woefully compromised Marriage Dissolution Agreement, against the advice of my attorney, followed by the rapid-fire finalization of a ruinous divorce in the eleventh hour so that I could quite literally get out of town

▪ Dismantling thirty years, selling some of it, giving away some, and packing the rest into a big yellow Penske truck pointed towards Vermont

▪ Taking a bloodbath on the sale at auction of the lovely, historic home where there had just been a family, and where there had been a functioning family for many of twenty years

▪ A couple of months of unemployment and commensurate fear and worry

▪ A secret job interview in New Haven, Connecticut after which I really began to learn how to live a cloak-and-dagger kind of life if I was to survive; and,

▪ The sad dissolution of my hard-won ballet school in Knoxville, Tennessee

It’s only a snapshot of the year, of course.  So many more things happened, some amazing, some terrible, and one thing in particular quite wonderful.  For the first couple of months after my move I wept with little provocation—driving down the Interstate to work, listening to music, grocery shopping, unpacking boxes and boxes of things.  I still don’t quite understand that, but I think being alone, upended, so far from family and friends, was terrifying, grand adventure though it may have been.

There has been growth, and increase.  I have started laying down the accretional layers of 2013, and they are forming and changing me. There is much to worry about, and much promise, and excitement.  If there is truth to the adage, That which does not kill us makes us stronger, then I am living, breathing proof of it.  More growth–and strength–to come.