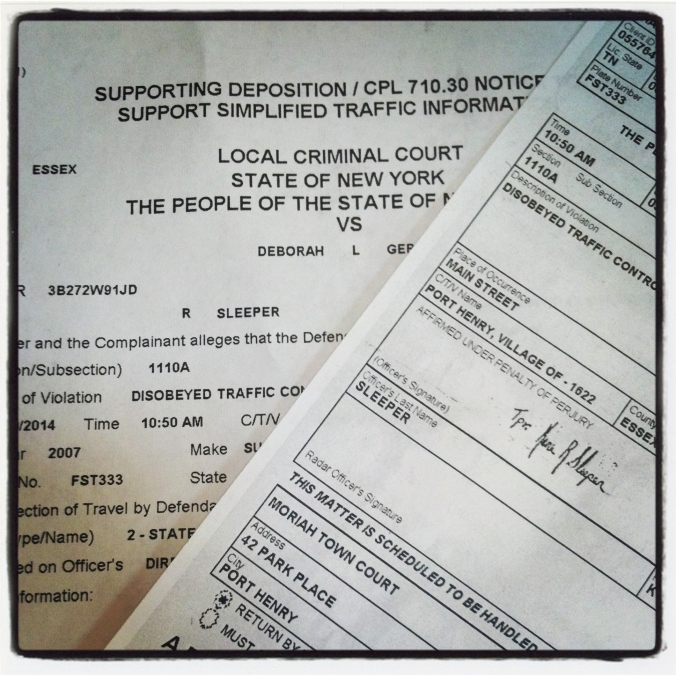 Yup.  In the eyes of the law, I have committed a crime.  And looky there: it says I DISOBEYED a traffic control device.  Makes me feel all warm and fuzzy about myself.  But this is actually a speeding ticket dressed in drag, sorta. And it is my first ever moving violation.  Seriously.  Handsome Chef Boyfriend and I drove up to Lake Placid last weekend for his son’s hockey tournament, and the state police were positioned strategically around every bend in the road.  (HCB says it was because the end of the month rolled around and they probably had not met their revenue quota; he knows about all that stuff.)

So young Officer Sleeper (irony, that) nabbed me going 45 in a 30, so he says.  And while we sat there in that humiliating place waiting for him to “run my tags” (cue the Bad Boys theme), HCB observed that he probably clocked me *just* as my wheels crossed the line from the 45 mph zone to the 30, as we were moving through the Next Little Town.

Dear People of the State of New York (since it says right up there that you are agin’ me), here is an endearing thing about Vermont:  the speed limit “steps” down gradually–you get lots of warning that you’re about to be in a 25 or 30 mph zone.

But I digress.  After a longish interval Officer Sleeper reappeared at my window and said he would not cite me for speeding, but instead for disobeying a traffic device.

You failed to use your turn signal, he said.

But wait, I said.  I was not turning.

This one carries a lesser fine, he explained.  And you might not have to pay anything at all.

Well, thank you for that.

So, despite the fact I was not handed a pricey citation for speeding, I still feel kind of conspiratorial.  Like I just knowingly participated in a big lie. I guess it’s all part of the criminal package, right?

I feel certain I shall get over it.

4 thoughts on “I am officially a criminal.”