Only eight days separate my birthday and Handsome Chef Boyfriend’s. That is excuse enough for eight days’ worth of prolonged celebrating, give or take. I suppose one could argue birthday celebrations really should not be a big deal at our age. But since people over thirty usually whine about ageing instead of celebrating it, making a big deal about it feels perfect. (I will also put in that I felt excellent in this morning’s yoga class.)

HCB and I have been together for almost three joyous years now. That is the best cause for celebration.

We’ve had several delicious days. And because we have summer birthdays, and live in rural Vermont, we take full advantage of exquisite local produce in our summer cooking and eating, to wit: one day before my birthday HCB made us this beautiful vegetarian dinner. 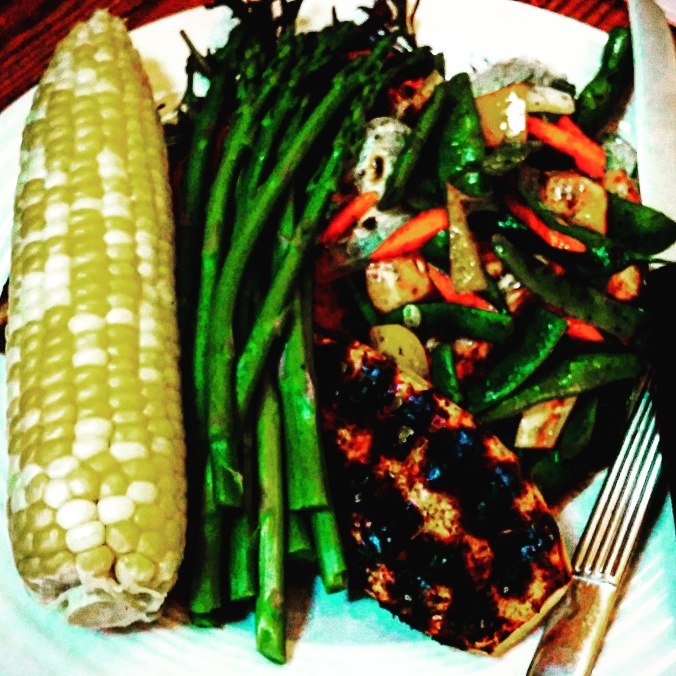 It’s almost entirely local, some from our favorite farm stand, some a gift from one of my colleagues who routinely shares bounty from her garden with me, a giant plastic bag at a time.

Then came my birthday, the unofficial kick-off of our week of celebrating another middle-aged year. Vegetarian and vegan friends, please avert your gaze, because this was the surprise dinner HCB made for us: 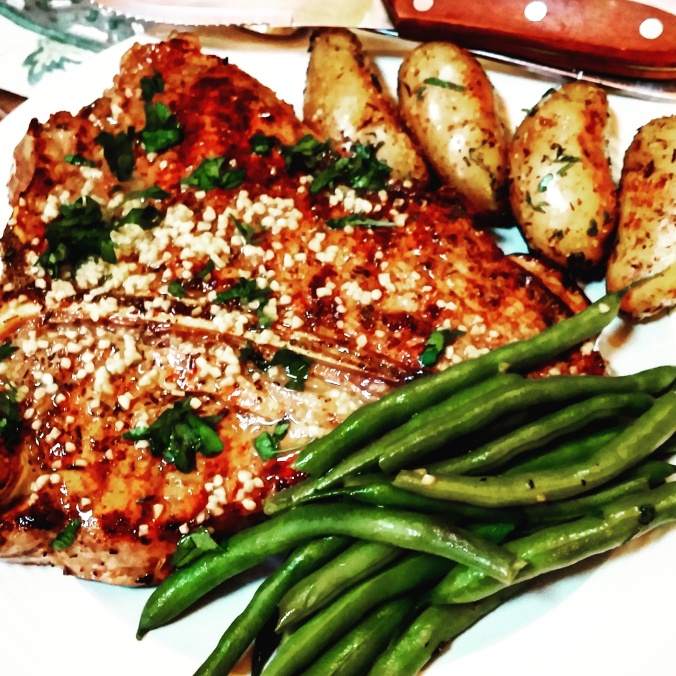 We don’t eat much red meat here, in part because it’s pretty expensive and we are still practicing a frugal lifestyle, but also  because we try to live healthfully. (And I for one am smitten by the writing of Michael Pollan, whose mantra—eat food, not too much, mostly plants—I try to live by as much as I can.) Still, lately I’ve had a hankerin’ for beef, and HCB answered that with a beautiful dinner, enough for about five people, it would seem.

And that cake up there? It’s my birthday cake, chocolate velvet made by HCB. I love chocolate more than life itself. My critique of the chef’s pastry skills:

Celebrating is also about going out, even when you’re pinching pennies. One recent day we headed into town to prowl around and pick through tag sales, and grabbed burritos from this favorite eatery. We took them to an adjacent park, where we ate them under a tall tree on a glorious afternoon, the brilliant blue sky dotted with puffy summer clouds. HCB can down one without leaving so much as a crumb or a drop of spicy juice in the wrapper, but I reduce mine to a sloppy rubble, as you’d expect of a five-year-old; there is always mockery about the mess. 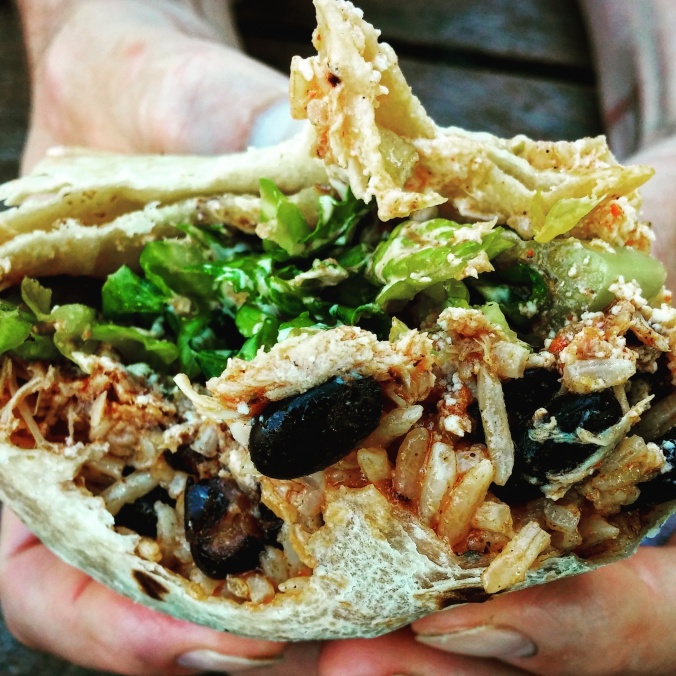 Then we snagged some treasures at a tag sale across the street: salt and pepper shakers to add to HCB’s daunting collection, a couple of never-been-used green scalloped bowls, and a $4 camera bag (happy birthday to moi).

And then work and life insinuated themselves into our long celebration. One afternoon we took my trusty Subi to the home of a friend with mad mechanic skilz, who replaced an axel. I shot a bunch of photos of his beautiful shepherd, and the pond on his property, and walked away with a couple I like (a telephoto lens is in my future, along with better editing software):

I love the great blue herron. There were scores of them on the property that once belonged to my great grandmother Gracie, where I lived for several years in the late 1980s. I found they eschew encounters with humans when they can, but will stand their ground like nobody’s business if they must. That one was in the water when I started shooting, and then calmly stepped out, made itself very small, and disappeared into the tall grass in just a few long steps. (And you can see from the shepherd that he took full advantage of the water when I was looking at the heron; a Monty Python line about “lovely filth” popped into my head when he came galloping out.)

And then HCB’s birthday was here. I made him dinner this time, seared tilapia, mixed greens, with local veg, and brown rice. I did not attempt to bake anything: it is definitely not a skill I possess. But I did procure a small container of our favorite ice cream. One move ago I lived not far from that particular creamery, which is how we came to appreciate the frozen concoction they purvey. It is happily available right down the street from us here, at the local general store. Forget that other well-known Vermont ice cream brand (which has long sold out to other interests, and no longer exercises the same quality control it once did). This stuff is da bomb. I could not get the scoop through it because it was so frozen, but HCB also explained that density is a barometer for quality. We had to let it soften a bit, well worth the wait. Should you visit Vermont, you must try it.

Last night we finished our celebration with Maine lobster, lovingly prepared by HCB with farmstand corn on the cob and a seasoned, roasted potato. It made me think of last year’s celebration, which happened in part in Maine.

Soon we will embark on a homecoming of sorts, a trip south to see my family (some for the first time in three years), to reconnect with loved ones, to introduce HCB to the people and places and sights and smells I’ve been describing all this time. We have so much to look forward to, and there will be stories to tell.

But before then we have a couple of weeks of hard work, starting now: HCB patiently gave up his afternoon to replace the Subi’s failed brake pads and rotors ahead of our trip, and we’re both trying to stay caught up at work in anticipation of being away. HCB’s trip to Illinois for a memorial service will punctuate the daily practice of work and exercise.

And as always, I am compelled to organize and clean. I was at it all day yesterday; it’s how I maintain the illusion of being in control. (And it is indeed an illusion.)

I need three more hours in every day.

4 thoughts on “Happy Birthday to Us”