No, really. It was. Friday was a grey day, Friday afternoon brought wave after wave of gully washers to Southern Vermont and New Hampshire, and Friday night the heavens opened up and Zeus hurled mighty lightning bolts down upon us. Prediction: Handsome Chef Boyfriend will look over the top of his glasses when he reads this and ask, Why couldn’t you just say “it stormed?”

Because it’s funner to say it my way, that’s why, and you should stick to making compotes and port wine reductions, and let me sauté the words.

Friday was a truly awful day to be on the road, which is what we were; it was the kind of day where the sun seems never to rise completely, where it feels dark by four, even though the time hasn’t yet changed, and a shroud of fog hides everything beyond the immediate horizon. Friday night was worse still. I might add some language about the mighty rolling thunder, and also the broken reading glasses, the “good” pair, which snapped when I yanked them out of my bag to read my phone in the dark as text messages and Facebook messages and emails poured in. But that would be a different kind of descriptive language, of the sort that exploded from my mouth when my glasses broke. (Rest assured I was not driving while intexticated. I drove the daytime leg of our six roundtrip hours in the car with my devices safely tucked away, and HCB drove the after-dark part of them, because he knows I lack confidence in my nighttime vision, especially in unknown territory, and most especially on dark and stormy nights.) Suffice it to say, no dark and stormy night could impede our plans, not on this day for which we had waited so long.

On Friday we welcomed a new torrent of joy into our family, one Warden-the-Shepherd. Officially, he is “Warden vom Traumhof, by Goliath v Traumhof and out of Emerald v Traumhof,” says so on his adoption contract. I still can’t wrap my head around the pedigreed part of this pooch, although I have read and studied it some through my new reading glasses after the Dark and Stormy reading glasses incident, but I will say he is related to this amazing blogger’s Princess Blaze and Marshal Dillon Dingle: I believe Marshal Dillon and Warden are half-brothers, if I understand all these blood lines correctly. Which I think means we are all family now, so I am sure they’ll be fine if we drop in on their fabulous new digs up in Maine for a few days. 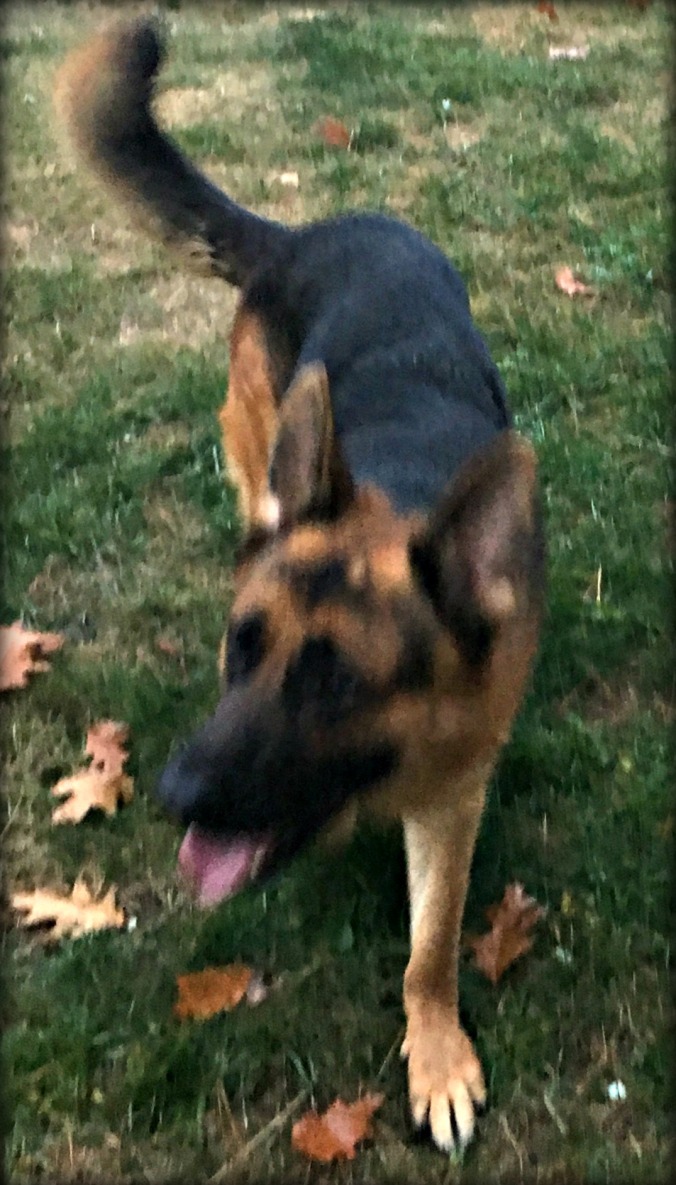 All our friends and family have been clamoring for pictures, which I have promised, but fell short of the mark on Friday. This was owing in part to the weather (I can’t replace my one “good” camera like I can my reading glasses), but also the general mayhem that met us when we arrived at Warden’s house, which I can only describe as a great crescendo of many, many enthusiastic German Shepherd Dogs who are busy announcing and greeting the newcomers but also reminding each other who gets to greet first and who should be put in his place while all this greeting is going on, to say nothing of the chorus of shepherd voices from the training center across the driveway and down the hill; imagine if you will. So I only grabbed a few fair-to-middlin’ iPhone photos, and some pretty dang blurry ones with the Nikon, blurry in part because of the low light and shutter speed (still learning, friends), but also because my subject would not hold still. But I love it when my “mistake” turns out interesting, like the head-shaking-teeth-showing image that seemed a perfect masthead photo for “It was a dark and stormy night.”

Here is the irony: Warden is one of the most agreeable, friendly German Shepherd Dogs I’ve encountered ever, one trait among many that drew us to him, and why his human believed he might be a perfect fit for us. In all the chaos that met us at the front door, Warden was there, too, but did not bark once—did not so much as growl—just tried to fight his way forward to inspect us, intercepted by a pretty girl named Prada and a grand dame named Charlotte. At least, I think it was Charlotte—there was a lot of tail wagging confusion and a few fierce reprimands, and Charlotte was clearly not one to suffer fools gladly. Plus, a couple of females are in season, which had Warden all excited for anybody in a skirt, including Charlotte, who is a mature gal whose time for all that is long past, and who mainly rolled her eyes in disgust at this whole spectacle. 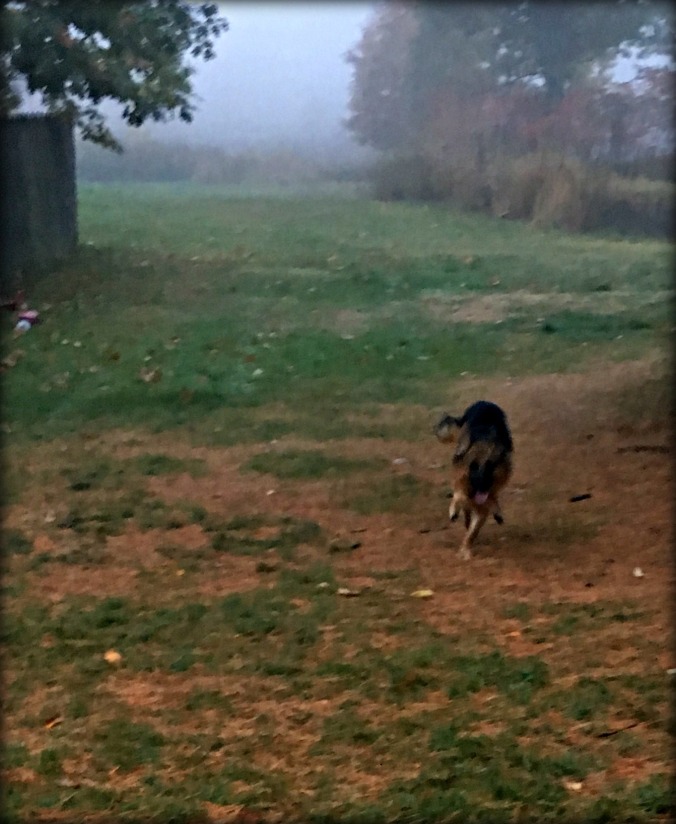 Warden is a special dog and I knew leaving the nurturing fold of his family, both human and doggish, would be difficult for everyone. But once on the road after our longish visit he proved an easy travel companion; we stopped for strong coffee soon after we struck out for home, at the precise moment the storm unleashed its greatest fury on us (or, in the worst part of the storm, if you prefer); the car shook with every clap of thunder, but Warden seemed unimpressed. I took this as a good omen, dark and stormy nights be damned.

I know everybody’s champing at the bit for endearing dog stories and photos, closeups and action shots. They will come in good time, although I can assure you the notorious German Shepherd head tilt is alive and well in this dog. For now, we must give him room to settle in and learn to be part of our family, and to embrace a lifestyle completely unlike the only one he has known thus far.

The sun is shining brightly this morning and there is a contented dog in twitching, snoring REM sleep at my feet, a beautiful condition for which I’ve waited too long. Soon the images will come into much sharper focus. 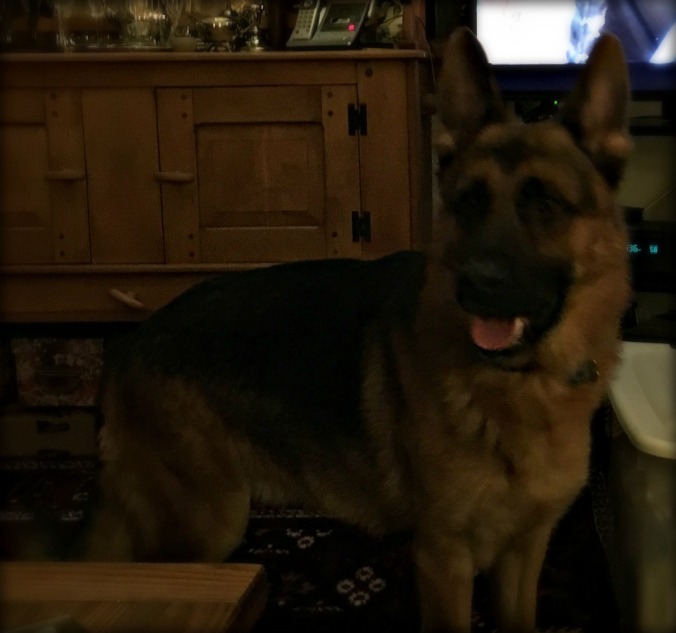 4 thoughts on “It Was a Dark and Stormy Night.”