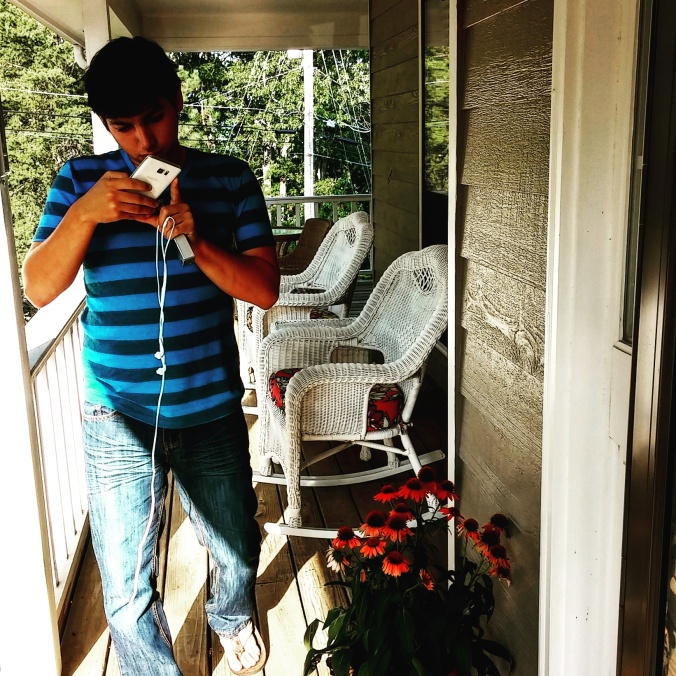 A wise friend once observed she could live life without ever, or at least rarely, leaving her house if she chose. She could buy groceries and other goods and have them delivered to her, arrange for her car to be serviced, set up play dates for her children, and manage countless other tasks from the privacy and convenience of her home. And for this woman in particular a “shut-in” kind of existence might have held a special appeal: she was mama to young triplets, two girls and a boy. And she was terminally ill.

Her life held so many challenges when I knew her, the logistics of getting everybody where they needed to be—on time and prepared—second only to taking care of herself. Helping her wrangle children and belongings one sunny morning only a couple of days after her routine chemotherapy, I mused what a monumental challenge parenting her brood must be—I don’t know how you do it so seamlessly, I said. Sweeping a gorgeous curly lock from her tired face, she quipped in her endearing deadpan, You’ve gotta have a lot of bags.

I found that so comically reductionist, but it made perfect sense at that moment when we were shuffling towels and children and floaties from our cars to the neighborhood pool for a playdate. Beyond clever life strategies, though, my friend possessed a disposition that eschewed a cloistered life: she longed to be part of a community of people. She made it a point to leave the house and do everything the conventional way, with face-to-face encounters in all our neighborhood venues and beyond. And when she could not leave she brought the community to her home in weekly morning gatherings.

She’s gone now and her children are grown. She made that important observation about community more than a decade ago, when the web had already facilitated so much for so many, and when the emerging smartphone technology was changing how we communicate with each other. In her obituary my friend opined that we’re put on this planet to help each other; when I reflect on her words now, I believe they were prophetic. We pay a heavy toll for crawling inside ourselves and forgetting the real, three-dimensional world all around us. I don’t mean nature, or even the built environment, but the world of people.

Are we losing our ability to talk to each other? My own Millennial grew up with a multitude of devices at his fingertips; they are a fluid extension of him. But there are times I want to reach through the ether, grab him by the collar, and shake the stew out of him. In our almost-daily video chats, despite the magical technology that truncates the thousand miles separating us to two feet, there is sometimes more dead air time than talk. While the line is open he simultaneously texts or messages friends (and even people he does not know) from various platforms; sometimes he says “hang on,” other times he engages without telling me, so I’m confused as to whom he is speaking at that moment. Once in a while I hand him some tough love: I’ll hang up and you can call me back when you’re ready to talk to me <click>. That feels so mom-ish and old fashioned, but still: I can’t imagine indulging him this way helps him develop the skills he needs to become a responsible adult, a road he’s still navigating. Or maybe it does; maybe the mere “presence” of his mom means as much to him now as it did when he was a child, even if there is no meaningful exchange of ideas.

Still, it’s a disquieting habit. I helped raise this kid and therefore presumably own it, along with his dad. He represents others of his ilk, a generation for whom the communication game has changed, and the rules are no longer recognizable, at least not to me. Being brushed off by someone less familiar to you than a member of your own family, when they owed you at least a modicum of decorum or civility but failed to disengage from a piece of hardware, is more difficult to wave off; these people feel damaged to me.

But I also wonder whether our fantastic modern devices are damaging the rest of us, who were not born wearing earbuds. Handsome Chef Boyfriend and I recently observed another couple at a local eatery who were each buried in a device for nearly their entire meal. They did not speak, coming up for air only long enough to shovel down bites of food, then turning back to whatever important thing held their rapt attention. We grinned and shook our heads.

I admit to drinking the Kool-Aid, too, as a compulsive user of small electronics. And I produce digital marketing content for a living, working in an industry that has grown up around this technology and helped shape it: you could say I’m part of the problem on a global scale. But our devices are intoxicating: they deliver the world to us in the palm of our hand. Who can resist that Siren? And paradoxically they’ve disconnected us, I think. To be sure, there are times when that is the better alternative—in a crowded doctor’s waiting room or on a jetliner, for example, when the need to create a barrier is important and real. On more than one occasion I’ve buried myself in a device to avoid an encounter with an undesirable; a book would have stepped up to the plate years ago, still a willing companion from time to time when you remembered to bring it. The phone, though, is small, powerful, and it’s always there. And when you live in the middle of nowhere as I have in recent years, it can actually help you feel connected, that is assuming you can find a signal.

Our devices make us feel evolved, but I question that condition when they appear to isolate us from each other instead of drawing us together. Look at me when I’m talking to you, your mom once insisted. Wouldn’t it be something if this one familiar refrain, forgotten in some circles, may finally be so important it saves us as a species? After all, maybe we really were put here to help each other.

2 thoughts on “Talk to Me, Dammit: A Lamentation”