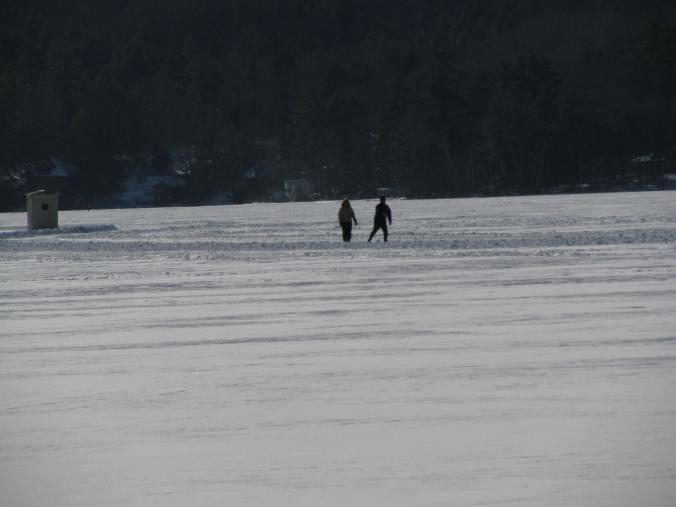 Handsome Chef Boyfriend and I skated around the lake again day before yesterday (no, that is not us in the photo–that woman does not have a death grip on her friend); this time we went for the entire circuit, about four and a half miles.  The wind was rough at times and on occasion the path all but disappeared because of blowing snow heralding the arrival of winter storm Nemo.  We were the only skaters besides a mother and her young daughter, who stopped intermittently to play in the snow.  (Oh, to be a child again and feel no cold.)

As before, I was chiefly focused on staying upright.  But I was far more confident and competent this time than a couple weeks ago.  HCB still tried to make me go much faster than I was comfortable going from time to time, I think mainly because—like most sixth-grade boys—he evidently enjoys hearing girls squeal.  QUEEEEEiiittttt!!!!  I am not in conTROLLLLLLLL!!!!

But aside from this wintry workout, my purpose in taking to the lake was also to demonstrate to HCB that the eerie sounds I had been hearing for a period of a week or so really existed and were coming from the lake itself (endless fodder for mockery from him about the lake monster with a taste for Southern girls).  But no, really.  Turns out frozen lakes do make noises, some of them spectacular and other-worldly.  And the noises are most likely to happen during periods of rapid changes in temperature.  (And of course HCB was aware of this but knows an easy target when he sees one.)

Several days earlier we had unseasonably warm weather here, with daytime temperatures climbing into the lower fifties.  I wondered what kind of effect that would have on the winter sports the lake supports.  After a couple of balmy days you could see waves on the lake’s surface; in fact, it did not look frozen at all anymore.

Shortly after this, when the temperatures began to plummet once more, the lake mounted quite a performance.  One very cold evening when I walked outside with Clarence, in the stillness of the night we heard a collision of two spectacular sounds:  the groaning lake, which I can only describe as somewhat like the sound a transformer makes when it blows, and the amazing and very LOUD sound of cracking ice.  This noise was in fact so spectacular that Clarence began a throaty growl that in no time escalated into full throttle ferocious barking.  I sure felt safe from the, er, frozen lake.

After doing a little poking around I found a few examples of frozen lake sounds.  None of them is quite like what I hear on my lake, but a few come pretty close.  This recording by sound artist Andreas Bick is interesting and the “cracking” sound is similar to what I have heard.  The “laser gun” sounds that many others have described and that occur in this recording I have not heard here; what comes off the lake is much lower and more guttural.

So many Vermonters have suggested to me that the best way to weather the long winter is to get outside and enjoy it.  Because I am a runner, getting outside has never really been a problem for me.  But I can say they are correct about enjoying the outdoors in the winter.  It lifts the spirits and makes that warm cup of soup awaiting you in front of the fire oh-so-satisfying.

Today there has been much grooming of the skating trail; I just grabbed the above photo of the plowman working on cleaning and widening it, which Clarence found enchanting.  Next weekend the resort on the lake’s south end hosts a three-day-long annual outdoor festival with races, sleigh rides, horse drawn wagon rides, snow shoe treks, ice fishing demonstrations, marshmallow roasts, and a culinary feast right on the skating trail.  The lake has spoken; it says, Bring on the Vermont winter.  My wobbly skating legs and I will be right there.