This was ice fishing derby weekend on the lake where I live.  Last night the people who belong to this particular ice fishing shanty–and who clearly have a sense of humor–were possibly up all night, bright lights ablaze (still shining when I went to sleep past midnight), presumably attempting to hook the prize winning catch.  And judging from the message, who knows?  Maybe they did.  (Note:  if you are versed in the ways of the ice fisher, please avert your gaze, gentle reader, as I know not whereof I speak.  Not gonna stop me from posting about it one dang second.)

For some time now I have wanted to walk around the lake and snap photos of these shanties, which are as individual as the people who build and trailer them onto the ice.  Some are thrown together seemingly almost as an afterthought, some are strictly utilitarian, some are obviously tony and well appointed, and some make what you could call, er, an architectural statement, like the one made entirely of repurposed port-a-potties.  Seriously.  Sadly missed my chance to capture that one, which deserved some kind of prize, fish notwithstanding.

Today I had every intention of traversing the lake to talk to the fisher folk about the whole business of ice fishing, and most especially, the fine art of building one of these structures.  The derby evidently ended earlier in the day, though, as I observed during my walk with Clarence-the-canine that a number of people were hefting their shanties onto trailers and driving them off the ice.  I scurried home to grab my camera and get what I could.

It is warm in this part of Vermont right now, with daytime temperatures reaching into the upper thirties and even lower forties most days.  This pattern is forecast to continue for the next couple of weeks, and the ice skating trail is officially closed for the season.  A number of cars have been skidding around the trail at bruising speeds, throwing up water willy nilly; I can only assume the ice beneath is still plenty thick, or these possibly thick-skulled people would not be flirting with calamity.

I can tell you firsthand that the ice is a huge mess, as I found out a little while ago when I stepped into somebody’s ice fishing hole which had a thin layer of ice on its surface, hidden beneath a dusting of powdery snow.  I must report that I was wearing my Vermont Barbie boots, and my foot stayed completely dry.  Jeans, not so much.  Fodder for weeks, possibly months, of ridicule from Handsome Chef Boyfriend and perhaps others. 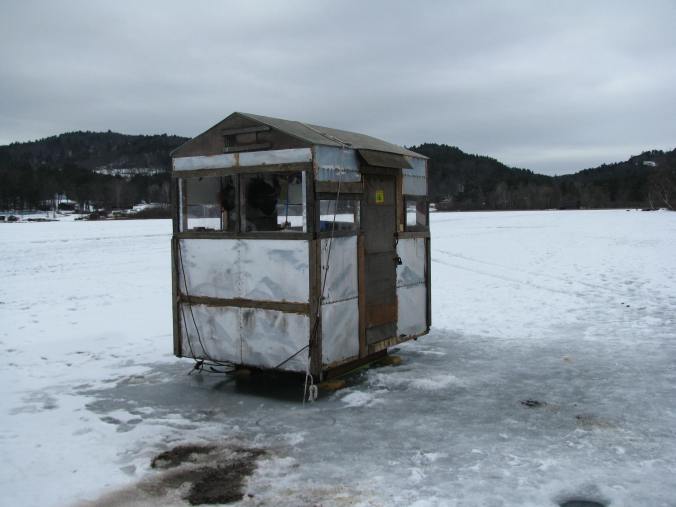 So I was able to capture a few, anyway; I kinda like this one, which reminds me a little of the sets from M*A*S*H.  There were more across the lake, but after my dip in the icy water–even though it was just one leg–I thought better of it.  Still I ask you:  where else can you find posts about ballerinas and ice shanties in one blog?  I also beseech you, if you are a seasoned ice fisher, to leave a comment to help enlighten those of us who are not.