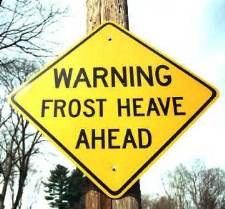 Southern friends, this one’s for you.  (And it is emphatically not a metaphor for anything.)

Late last winter or maybe early spring, not sure, Handsome Chef Boyfriend and I were headed across the Connecticut River to a favorite little eatery over in Lyme for a pleasant cold-grey-day lunch.  I was behind the wheel of my trusty Vermont-ish Subi and a short while into our trek noted a sign just like the one in the photo.  WHAT is a frost heave, I wondered aloud?

HCB patiently explained it is more or less a bump in the road that happens during the freeze-thaw cycles of winter and spring, and advised me to take it easy.  Which I did.  The sign gave us fair warning, and the bumps were not too terrible.  I observed that these things must wreak havoc on roads, that the crews must be out en masse after spring thaw and mud season (a story for another post, Southern pals) working their tails off to repair the roads.  Not necessarily, he explained. Oftentimes once the heave settles, he went on, you can’t even tell there was a problem in the first place–the road more or less repairs itself, sort of.

Last August as I was cozying into my new digs in a more central part of Vermont I noted a sign that simply says, “Bump,” on the busy two-lane highway that leads from my driveway down to the I-89 ramp.  It is just beyond another sign like this one:

which indicates snowmobile trails cross the highway there (another source of wonderment for this New England newbie).  I noted a separate hand-made sign that somebody had taped beneath the snowmobile sign, that also says “Bump,” but instead tries to shout it:  BUMP, <dammit>! Okay, the emphasis there is mine, but you get my drift.  I am not sure who posted that sign, but it is unofficial-looking and encased in one of those plastic thingummies you use in a three-ring binder, held in place by duct tape.  It is weathered and crumpled on one side and has obviously been there a while.

In my comings and goings up and down the highway during late summer and pretty much all of fall, I never once actually noticed a bump of any kind at all.  At first I braked intentionally so as to avoid jostling Yuri around (that is the moniker some ballet friends and I gave my car), but when the road seemed smooth enough in that spot, I tuned out the bump signs.  Both of them.

Until just a few short weeks ago.  We have had a bit of a rough winter this year, at least by my Southern girl standards, but even some of the locals admit this, so I am not making it up.  We’ve had sustained temperatures in the single digits on occasion and plenty of sub-zero weather.  The mercury has not risen to 32 degrees for any significant amount of time in quite a while.  (And the only really fantastic thing I can say about that is it might mean we have a less buggy warm season this year.  At least that is the claim made recently by a smart-sounding person on local public radio.  I am all about that, because we also have this insidious little creature in Vermont known as the deer fly, and I am here to tell you it makes you want to kill yourself on an otherwise beautiful summer’s day.  But I digress.)

So this rough weather (combined with incessant brining, sanding, and plowing) has created pretty terrible roads in these parts–potholes the likes of which I have not seen before.  Turns out the innocent purported “bump” is none other than a (you guessed it) FROST HEAVE WARNING.  I discovered this when I flew over it going 50 (sorry, Yuri).  Being the quick learner I am, it took me only a couple more times to realize I needed to slow down.

Now the frost heave has grown to epic proportions and is more like a shelf, or a step, or as HCB observed, a ramp.  You know–the kind those snow boarders who are doing their thang over in Sochi right now hurtle themselves from for reasons that elude the sane among us.  (I heard one of them quip during a public radio interview the other day that the snow on the mountain in Sochi was really “sick”–which the smart sounding interviewer explained meant “good”–and he was really “stoked” about it.)  Um, really gnarly.

I am feeling less stoked about the so-called bump because this evil phenomenon has the capacity to take out an axle.  Or mess up your really expensive snow tires.  Or at the very least knock your really hot coffee out of the cup holder and into your lap.  Really.

I completely “get” the second sign now–the homemade one with the duct tape.  There is no warning for this particular frost heave–if you slow down only when you see the sign, it is too late.  Somebody took it upon themselves to at least try to give all of us who travel this road in the winter every day a teeny heads-up before our teeth are rattled out of our heads, and that is a lovely gesture.

So, thank you kind person who made every effort to help the unsuspecting traveler take this “bump” seriously.  In a place where there are so many winter hazards–below zero temps, howling power-outage-inducing wind, icicles big enough to impale you should you have the great misfortune of being in the wrong place at the wrong time, icy roads, snow, snow, and did I mention snow, and yes, frost heaves:  it is comforting to know that somebody out there has some good, old-fashioned Southern sensibilities.