Robbins was more immediately successful than Balanchine, but the two together…when I think that we had them both! What a combination! We were incredibly lucky.

In fall of 1969 Memphis Ballet School and its company had not long occupied the second floor of a mainly spent Depression-era building at the at the corner of Summer Avenue and National Street; before that a fire had destroyed the company’s home and in the interim classes and rehearsals were held in the National Guard Armory; my family had only just moved to Memphis from Knoxville. The Armory was where I had my first pre-ballet classes at age five, but what I recall most about that time were long hours sprawled in a corner with my books and crayons waiting for mom’s classes and rehearsals to end.

I started ballet classes in earnest when I was seven or eight at the school on Summer Avenue. You could blast through the street level door of that ramshackle building and explode noisily up the dark, narrow stairwell without disturbing a soul. The sound of live piano accompaniment spilling from two separate ballet studios collided in a familiar dissonance and met you at the top, along with the air, fragrant with sweat and rosin and the smell of old building. Patches of duct tape fought hard to push back the innards of orange vinyl sofas in the hallway, worn out furniture of unknown provenance.

There was a proper office to the right where a receptionist sat at an old desk whacking out correspondence on a loud typewriter. To the left a hallway led you to changing rooms and toilets around a corner, and finally to an antiquated Coke machine where you could drop a quarter in the slot and open a skinny door to wrestle out a Coke or a Tab, or an Orange or Grape Nehi; sometimes you had to put up a fight ’til it surrendered your drink, else trudge back down the hall to the receptionist to report your lost change. I chipped my tooth on one of those bottles when I was eight, and got in trouble for horsing around in the girls’ changing room to boot.

The school’s new directors were young Soviet-era immigrants, Balanchine disciples to the core, and as such lifted the School of American Ballet paradigm out of NYC and plugged it in on that seamy Memphis street corner, right down to the class level designations (Children I, Chidren II, and so on) and color-coded school uniforms. I am absolutely certain this did not impress me at age eight. But as the years unfolded my eyes were opened to a minuscule ballet world where everybody knew everybody, and because of our connection to SAB and Mr. Balanchine himself, NYCB company artists were but a phone call away: they visited us often and carried the principal roles of most of the ballets the company mounted in those days. It was not unusual to see the likes of Edward Villella or Gelsey Kirkland or Helgi Tomasson or Patricia McBride (and many others of their ilk) wandering around those creaky hallways. And because mom danced in the company, I experienced complete and early immersion in that tiny world, whose New York City epicenter it seemed had landed right on our doorstep.

We also sat on the precipice of what would soon emerge as ballet’s golden era, where one Rudolph Nureyev had already paved the way for others to follow and to foist classical ballet upon American pop culture. It would not be long before we tuned in to see Mikhail Baryshnikov dancing Twyla Tharp on our living room televisions, names that would ultimately come into common parlance everywhere. Though I am certain I took some of it for granted, my ballerina mom worked hard to impress upon me how lucky I was to share the company of these ballet greats.

In the old ballet school building on Summer Avenue there was a musty storage room next to the office where sets were lain on the floor in heavy, carpet-like rolls; it was narrow and dark and most ballet school parents probably did not notice it in their comings and goings. The only occasion I had to go inside it was for costume fittings, when a seamstress came in and set up her supplies near the doorway during Nutcracker season; she made you hold still to avoid being stuck while she pinned and tucked material, then asked you to turn around, and tugged at your waist, made you turn around again, and raise and lower your arms. A few more pins and you were dismissed.

But if you were to climb carefully over the yards and yards of rolled sets in that big closet you’d finally reach the other end, where you could peer through a crack in a locked wood door to see everything that was going on in the main studio. It was where my mom positioned herself one January day in the mid-1970s to observe me in my first audition for residential ballet school when I was twelve. Mom had long left the company and started teaching at her own school in the suburbs where I was now her student; we had not been inside that creaky old building in a while. And unbeknownst to me at the time, I was about to cross a much bigger threshold into the land of ballet giants. 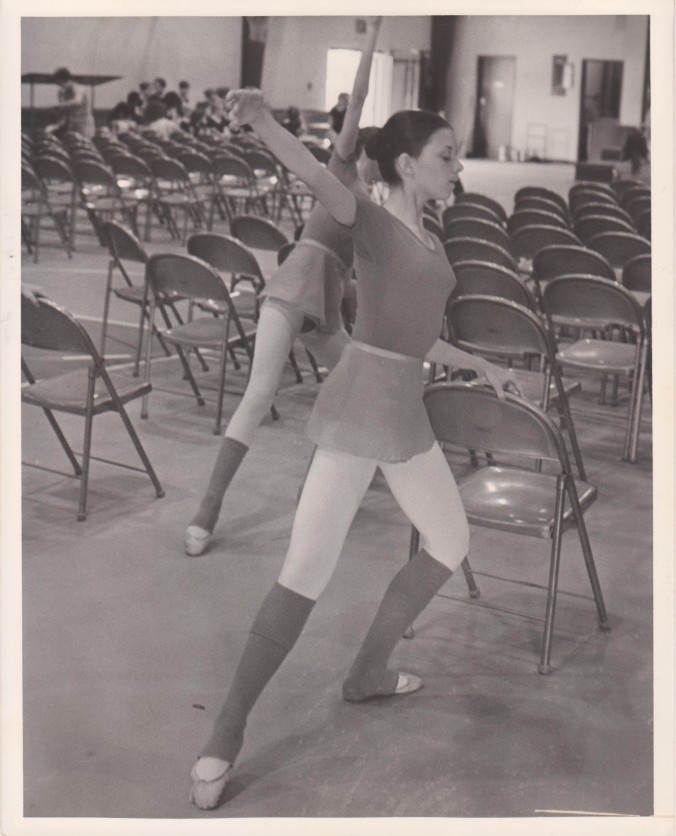 My mom is a force to be reckoned with. We had discussions about the faculty at the residential school in Illinois where I would attend summer classes for three consecutive years; they centered around duly reverential behavior and good deportment in general. I was warned of consequences for behaving badly, as gangs of adolescent girls are wont to do on occasion. I am sure I rolled my eyes, but I did hear this message: you are privileged to be taught by the likes of these people. There were many of them: Gwynne Ashton, Alexander Bennett, Natalia Krassovska, Buzz Miller, Vitale Fokine, Birute Barodicaite, and so many others. Most of them are gone now.

Last week ballet lost another one, the delightful and inimitable Violette Verdy, a Balanchine ballerina of French extraction who left an indelible mark on generations of young dancers. Her absence leaves another great void, a hole that will be filled by others only in the fullness of time. A friend and colleague mused, Does every generation feel the losses like we do?

I can only speculate on the answer to that question. For my part, I do know it took me some time to fully comprehend and appreciate the moment of that microcosm of ballet greatness at the corner of Summer Avenue and National Street in Memphis, and I had help; I know there were probably many who did not get it at all. And I took that awareness with me when I went away to school. And I most assuredly took it with me when I had the great privilege to attend teacher training at American Ballet Theatre in 2009 and for a few years thereafter.

I hesitate to speak to an entire generation of young people who do not seem duly impressed when they find themselves in the presence of giants, or do not miss them enough when they’re gone, but I think it is the case sometimes, symptomatic of decades of feel-good teaching, celebrations of mediocrity, and shored up self esteems. At the risk of sounding tiresome, I submit there is a price tag on it; we’re already paying for it collectively well beyond the reaches of the ballet classroom.

Miraculously, the building on Summer and National is still there, derelict, boarded up, graffiti’d, just about forgotten. Nor has the rest of the neighborhood fared well; it was never a good neighborhood to begin with, but across the street from the school once stood an old, diner-style Krystal and a corner Rexall drug store. My young colleagues and I patronized those businesses every single week; they’re gone now, along with the ballet greats who flew up and down that dark stairwell so many times. In its stead looms a neighborhood that knows nothing of any of that.

One of life’s great thrills is finding yourself in the presence of giants; the important thing is to learn humility and recognize the moment. Ms. Verdy certainly did.

About the photos: the first is of a rare history book in my possession, written by Boris Kochno and containing numerous heliogravure and photogravure illustrations by Picasso and others. It is teeming with so many of the antecedents of ballet giants I have known. The other photo is of me around age thirteen warming up before a spring demonstration performance, on the eve of another summer at ballet school in Illinois. Many thanks to the wonders of Google for the image of Memphis Ballet School in the here and now.

7 thoughts on “Dancing in the Company of Giants”