Vermont broke weather records last week: my car thermometer said 73° when I left work Friday afternoon, with partly cloudy skies and a pleasant breeze that carried an earthy spring scent—in February. I could be wrong, I speculated to Handsome Chef Boyfriend a few days earlier, and I know there’s still plenty of time for big snow, but this feels for all the world like spring thaw to me. Yes, he agreed, and even if it snows again, it won’t stick around long.

Call it climate change, but it feels more like weather. Winter’s fury’s still fresh in my mind: below-zero misery, the distinctly menacing sound of the heat cycling on and staying on, heart-stopping electric bills in the post office box, and the eternal fight to keep winter on the outside of the car, to say nothing of shooing it out of the house: we’ve paid our cold-weather dues, and if spring wants to move in a month early, so be it. Mud season is a thing of beauty.

Yesterday there was no cycling on of the modern kerosene heater that warms us pretty well in this tiny place. The house was blessedly quiet, with only the sound of a laptop keyboard clicking behind me, a snoring Labrador wedged next to me on the sofa, clouds drifting across the skylights overhead, and aromatic brown rice bubbling under the saucepan lid on the stove just around the corner. Later on we’d throw open the door and leave it that way, just as we do every day in summer: how delightful to enjoy this appetizer in winter, even if it’s only a tease.

Spring thaw means resuming my running habit in earnest. But where it was once part and parcel of every day in my erstwhile Southern life, in Vermont it is seasonal. Some folks manage in the winter with special equipment, but my damaged foot objects. This was a point of dispute between me and my well-intentioned doc in December: you can do it if you really want to, she insisted. I lobbed one back at her: not at my age, not with Haglund’s deformity. I know Haglund’s deformity, she persisted, and you can do it if you want.

It was another doctor, an orthopedic surgeon in Tennessee, who identified this malformation in my heels (it’s more pronounced in the left one), and another who explained why I have it. Sometimes Haglund’s is called the “pump bump” because women who routinely wear heels are vulnerable to it. I’ve never worn heels a day in my life, except maybe for the odd special occasion. I mentioned this to one of my M.D. ballet dads a few years ago when I was still teaching. How could I have something tied to the wearing of those awful shoes, when I never wear them? Well, he opined, you may not wear the shoes, but consider this: you put your foot in that position every day of the week for hours at a stretch.

He made an excellent pointe, so to speak: ballet dancers (and their teachers) maintain this position of the foot more often than not. It’s called relevé, and you can see it here in spades in an examination class at the renowned Vaganova School:

But I digress. My doctor is wrong on this one, and that is that. I’m more body aware than the average Joe and because of my badly compromised foot have exactly no stability on ice, not even on packed snow if it’s slippery. Time and again this winter I grabbed hold of trees to stay upright negotiating the topography of the back yard for Scout’s late-night pee breaks. If growing old is not for sissies, as the wisdom goes, neither is winter in Vermont with a dog.

Nor is the confounded bony protrusion on the back of the heel the only problem: it’s all the soft stuff around it—muscle and tendon—irritated by movement, sometimes angered, occasionally declaring all-out mutiny. I will make your life a living hell if you attempt to stand and walk. It occurs to me I can’t have my foot replaced.

So I won’t run in those conditions, even with special equipment, the conditions which prevailed from some time in December until only a few days ago. Instead I will respect the foot.

But mud! Mud is the perfect medium for running, a thing I remembered last weekend when Scout and I embarked on our first several runs of “spring,” as it were. The heel sinks into the soft, mushy gravel in a satisfying way, water oozing up around it, the shock absorbed mercifully and gently in the ankle, the knee, the hip, and the lower back, while blood courses joyously through the veins. Scout is a perfect running dog, happy to keep up whatever cadence I ask of him. A slow couple of miles a day feels fine for now, with some starting and stopping to honor the foot thrown in for good measure: I’m a good listener and had rather avoid mutiny down below even if the heart thumping up above urges us on.

After the rice finished cooking yesterday I laced my running shoes with Scout circling me enthusiastically. Crossing the bridge over the Battenkill I glanced uneasily at the water roaring under it in torrents, carrying runoff from the nearby mountains; later HCB and I would observe places it has already breached its banks to settle in wheat-colored fields. Elsewhere in our neighborhood the same is happening on a smaller scale, streams ripping through culverts under the roads and in some places spilling over the top of them.

Scout kept his nose skyward to concentrate new smells that surely must assault him like a freight train, stopping now and then to bury it in the warm, wet schmutz on the side of the road below. Meanwhile my foot cried out like a mythical Mandrake yanked out of its potting soil, but I didn’t let on to Scout, only slowing down now and again to shush the pain.

Once home we headed directly to the tub, where a mud-encrusted Scout suffered no pain in his first stem-to-stern scrubbing on my watch. And true to his character, he stood resolute and patient in the soapy water through it all, content to lie on the bathroom floor quietly afterwards for a towel drying and brushing. Scout ended his day as it began, hunkered down with his humans, but sweeter smelling, exercised, his belly full of turkey and kibble.

I know running will never be the same as it was even a few years ago. There will always be a twice-daily regimen of ice baths, and pain meds, and fish oil, maybe some massage, and the occasional Arnica application if I want to keep going. Two things I know for certain: I need to run. And my left hand needs a leash in it. For the time being, anyway, they’re both met. 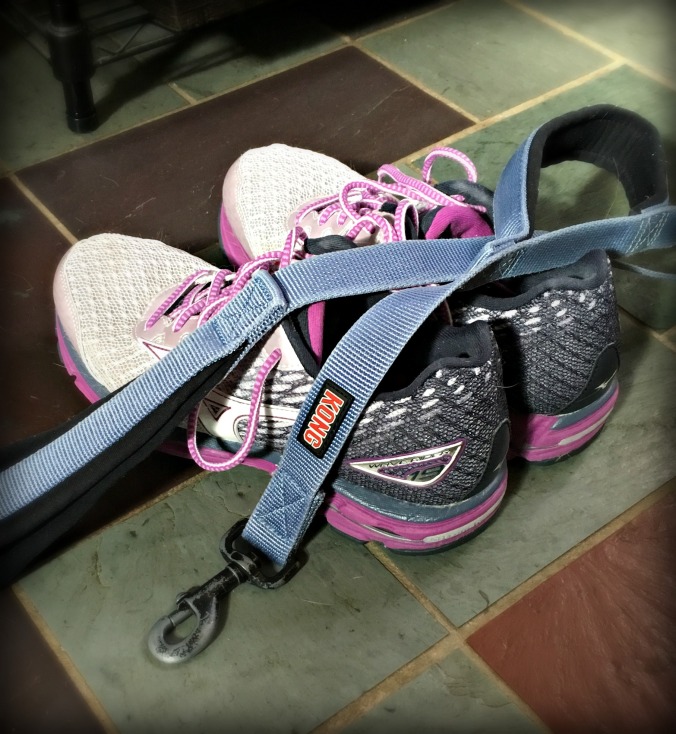