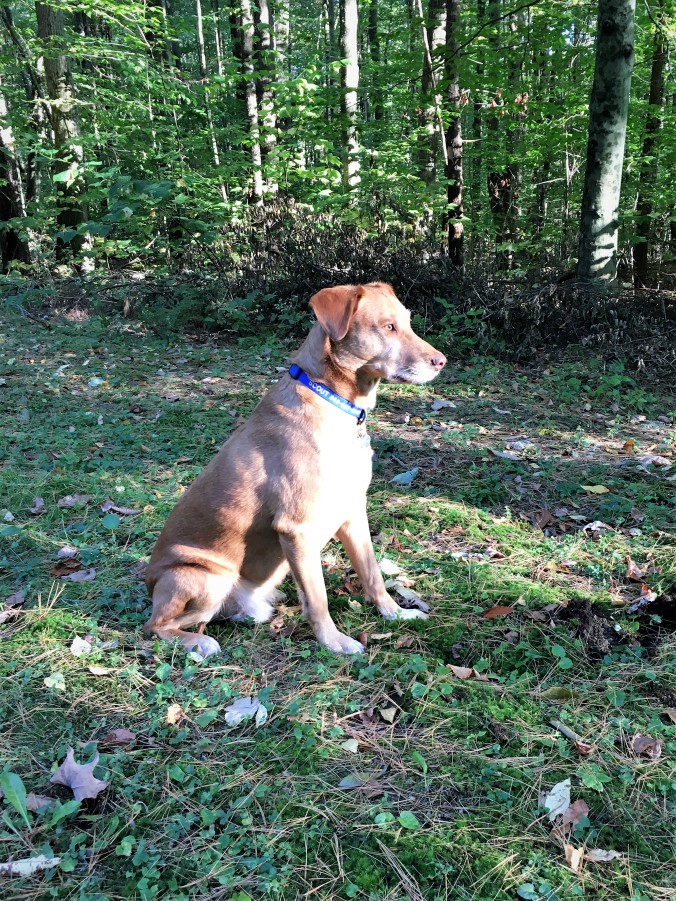 I Know Where All the Chipmunks Are

Whatever life experiences shaped Scout-the-Lab before he came to us last December, there is this one truth about him, and about all dogs says the vet: they forget nothing. Scout’s skittishness is authentic, part and parcel of who he is. I may have envisioned a goofy, tail-wagging demeanor in my early quest for this dog, and that is my own folly. People at home and at work are sometimes crestfallen when he rebukes overtures of affection, when he shies away from an outreached hand, or jumps out of his skin at the slightest provocation, or even cowers when an unexpected human comes barreling around a corner. Taking these reactions personally is a human problem, not a doggish one, just as my own expectations of what Scout would be when he came to us were based on my own preconceived notions of a Lab, and not on Scout as Scout. And anyway, the first time our vet cupped Scout’s chin in her hands and peered into his evocative eyes, she said, Oh Scout: you are a Chessie.

The Chesapeake Bay Retriever is not known for its effusive personality. It does not really matter.

I’ve always loved the name Scout, my favorite literary character in my favorite piece of Southern writing, the little girl with whom I identified growing up. (Never mind that Scout-the-Lab is a boy dog.) But if I had to draw a parallel between my Scout and a single character in that exquisite story, I’d be more inclined to link him to Boo Radley, the tragic, misunderstood character, “with his shy ways.” He is who he is. 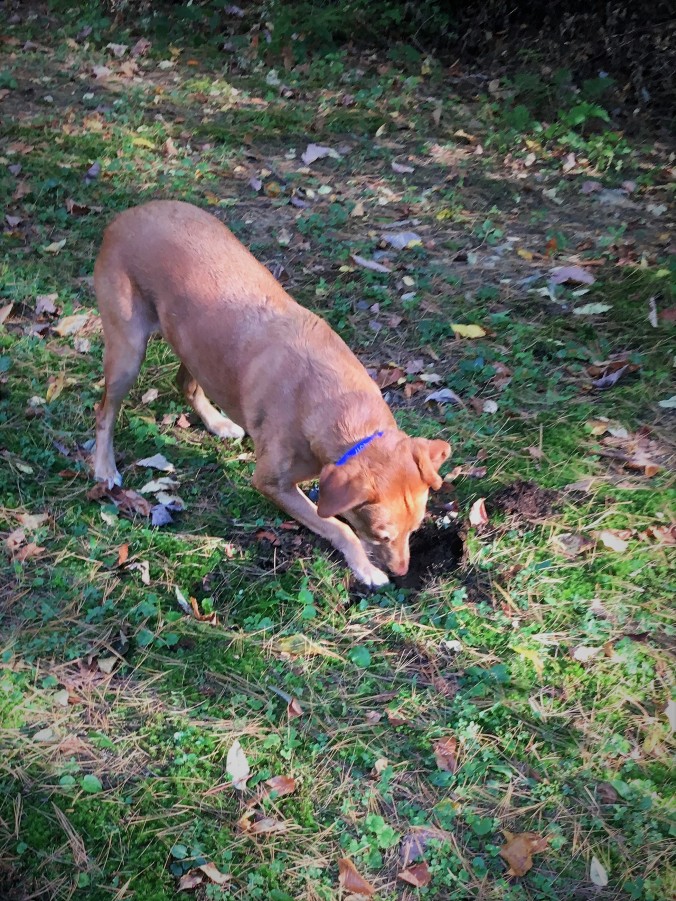 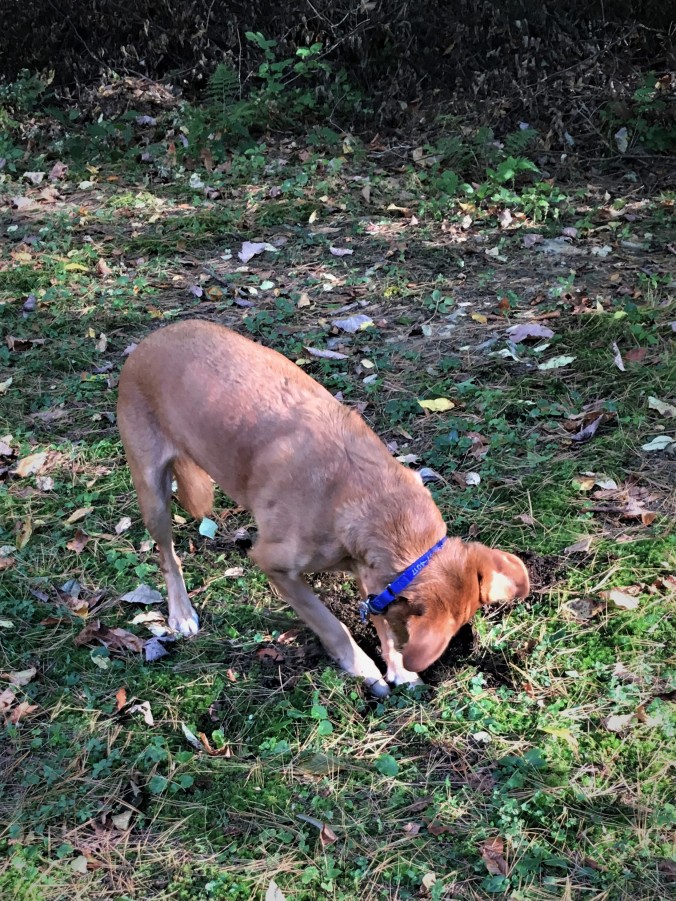 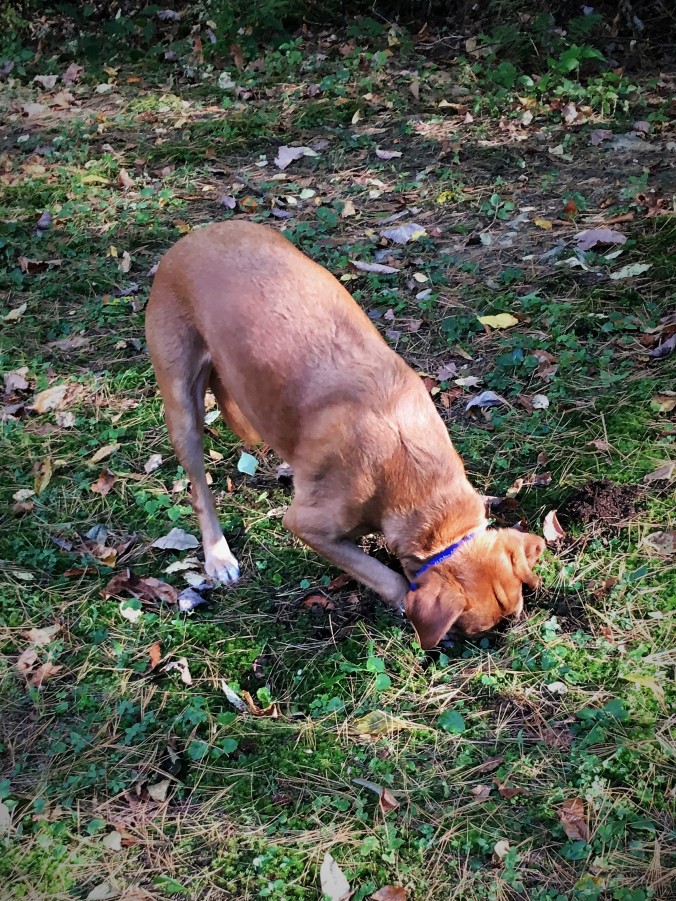 A few weeks ago when we launched on our Dogged Adventures with Scout comfortably tucked into the back seat of the Subi, I worried he’d be unable to reconcile what was going on in that little noggin of his. After his tenure with two separate families in Texas (humans who loved him, to be sure), he went into foster care for a couple of weeks. Thence onto a transport van with others of his ilk, rolling all the way from Austin to Brattleboro, Vermont, arriving on what was the coldest calendar day in New England at that point, turns out. Thousands of miles across the country, and into the arms of two perfect strangers, who seemed nice enough on the face of it. But surely, without ascribing too many human emotions to a trembling dog in a foreign land, I believe ‘bewildered’ must have described his condition, at least in part.

Scout was long familiar with climbing into the car and going when it was finally time for our vacation—going to work with me most days every week, going to dog camp one afternoon a week, going up to my financial planner’s office once in a while on a big elevator (head tilts for days), going to the store, and even going inside some stores. But this time the going would keep on, well, going. I worried Scout might imagine he was being rehomed. Again.

What happened instead was a week’s worth of adventures with the sweetest rewards: being invited inside the home of some friends down in Knoxville and socializing with their dog for a bit, exploring all kinds of worldly venues with me, my Handsome Chef Boyfriend, and my twenty-something, enjoying some extended outings in nature on a couple of occasions, eating exceptionally well, and—joy of joys—sleeping in a big bed with humans, a thing he can’t do at home because of the Dreaded Spiral Stairs. By the end of our trip Scout had grown accustomed to looking for the bed first thing when we checked into another hotel: Ah, there you are, bed. <check> Now, let me just <muscles twitching, preparing to jump>, THERE we go. Yep, this one’ll do fine. <circle around, plunk, exhale>

Earlier in the week when we checked into our Asheville Airbnb it took him a bit longer to get his bearings, because we had an entire apartment to ourselves. He split time between our bed and the twenty-something’s futon in the adjoining room, but always slept with us, alternately curled or sprawled between us near the foot of the bed. One beautiful morning as we began to stir, HCB reached his long arm down to scratch Scout’s noggin, and in a single, perfectly coordinated movement Scout lengthened his sinewy body until his head rested on the pillows right between ours. We lay there and giggled and continued to dole out affection: it is fair to say the dog was content to indulge in the moment, as were his humans.

Still, there must have been this unrelenting question: where are we going?

The final, sunny afternoon of travel when we began the steep ascent up the twisty Vermont mountain road to our home in the woods, Scout sat up in the back seat and surveyed the familiar landscape. As the car rolled to a stop in our drive, I hoped everything—the events of the past week, and now this moment—would crystalize for him: I am home. There had been no aha! moment on that cold Brattleboro day back in December. Only the passing of the leash from one hand to another. Here, I hoped, we had arrived at the place where everything would finally make sense to Scout: this is my home and my family—we do things together.

I had to wait until the next morning for my answer, early on Monday when it was time for post-vacation work reentry. Curled up comfortably on the sofa in his favorite spot, Scout only barely lifted his head to acknowledge me when I told him it was time to go. Nah, he yawned sleepily, you go on: think I’ll lay here and watch some telly, maybe get a little shut-eye today. Have a good one, see you on the flip side. 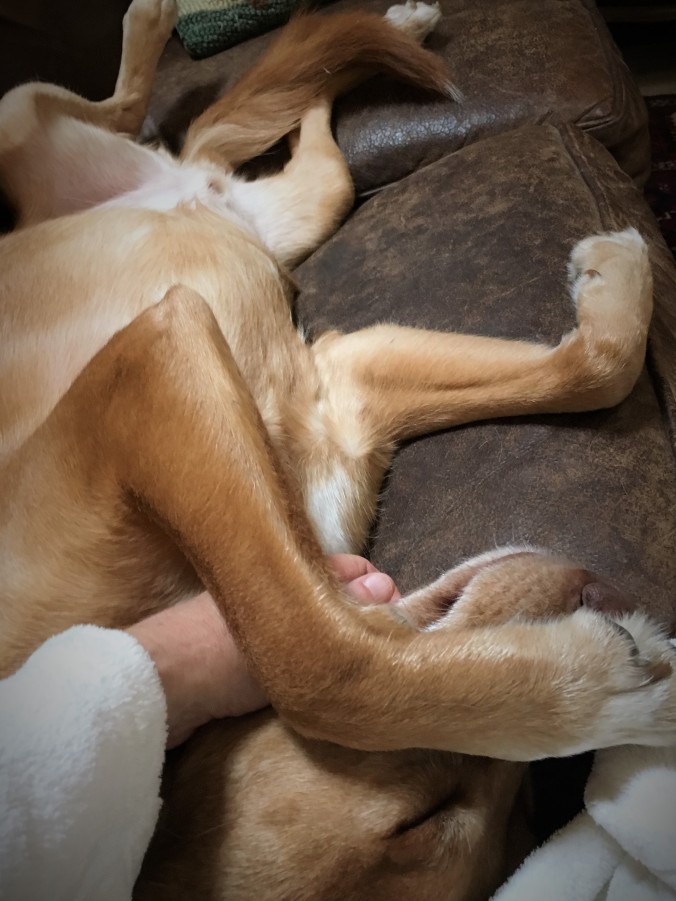