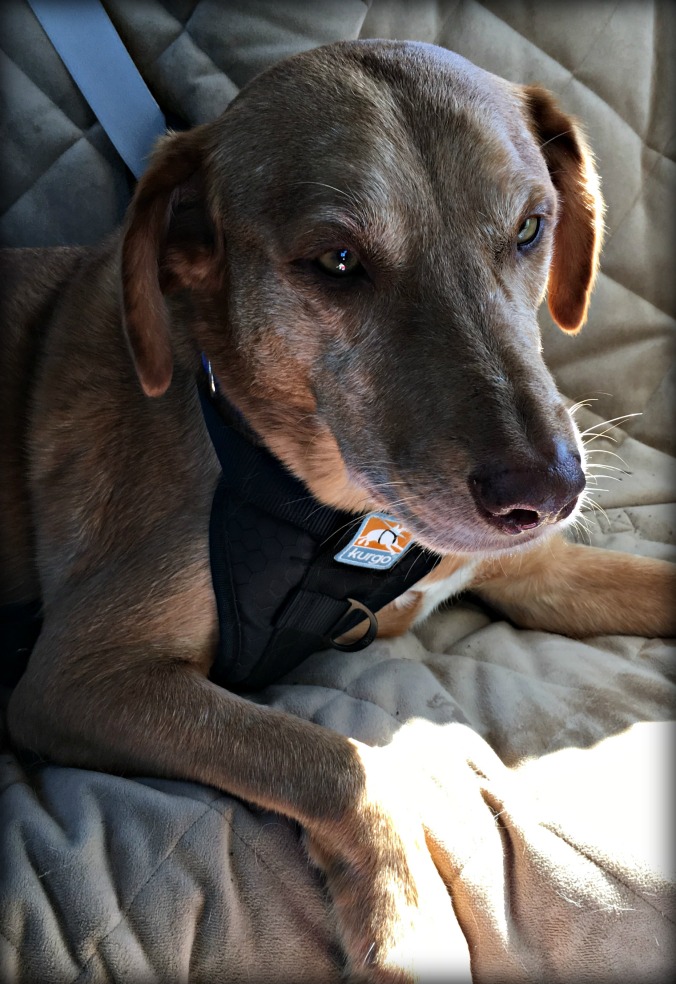 Just a few yards past mile marker 152 and nine tenths on Virginia’s southbound Interstate 81 stands a tall clump of vegetation completely engulfed in kudzu—fully involved, the fire department would say—like some unfortunate character from Middle Earth awaiting release from a centuries-long curse, or maybe more like the creatures the White Witch turned to stone in Narnia. There they stand by the side of the busy highway, and there is where the South begins, because I say so.

We passed that milestone a little while ago, road-weary, none the worse for wear, looking forward to reaching our first destination tomorrow with the stoic and resolute Scout-the-Lab in tow. The last couple of hours always drag on to eternity. That’s when I started a game I called ‘Name the Contents of That Trailer.’ For example, I told HCB, that one is full of Pampers and Pullups headed down to clothe the hurricane babies in Texas and Florida.

How do you know? he quipped.

Because I said so (see the South above), and you are not the boss of my trailer story game. Your turn: what’s in that one up ahead?

Mattresses And Trampolines, And Onions, he said.

Yep, he continued: look on the back. It says ‘MATO.’

Well okay, but you must instead say ‘Mattresses and Trampolines, Onions,’ because if you are using the ‘A’ for ‘And,’ then you can’t invent ‘And’ if it does not exist before ‘Onions.’

He then changed his mind to invent an acronym that included ‘Massachusetts’ and some other words you can’t say in polite company.

Hurricane Irma would not leave us alone, starting this morning when we confirmed with my ex-sister-in-law-but-still-my-sister that we did not have the constitution to come see her down in Charleston as planned, even though she is sitting out this still-unknown event, because it will still be bad in spite of the spaghetti models, and because of this miscreant known as a Predecessor Rain Event, and I am not making that up—she texted it to me last night, and she is smart. In short, the wind and rain will be horrid, there will be flooding, and the last thing she needs is a house full of dogs and people and no power.

Earlier today standing in line at Arby’s to get HCB some vacation curly fries, I listened to the truckers around me warning each other to stay safe on the road. It was clear these folks belong to a special brotherhood, strangers united in a singular mission to drive trailers full of supplies into dangerous and needy territory. We passed and were passed by a squadron of cherry picker utility trucks from New Jersey all day long, each one flying an American flag, and one besmeared with a homemade ‘#IRMA.’ These guys need a special prize for the work they’re doing.

I hope everybody stays safe, but know some will not.

And I hope they get something useful like food and water instead of pens and racing skis, as HCB suggested one truck was carrying.

It’s how we roll. More soon from our Way Down South Trip, Part the Third.

3 thoughts on “Dogged Adventures: Where the South Begins”