You’re getting too big for your britches. —Mom

And so it goes with Scout-the-Lab-ish, who snapped at David-the-Chef a few nights ago, after David got up in the middle of the night and returned to bed and found a dog where there had been a chef-sized space only moments earlier. David attempted to gently scooch Scout over so he could climb back into bed, but Scout protested. When dogs snap at their humans, all bets are off: down he went, at my immediate and unsympathetic bidding (me with my full-on angry voice and all), and into the perfectly good dog bed on the floor. Three times Scout attempted to reclaim his spot, and three times he was made to get down and go back into his bed. Third time was a charm, and two humans and a canine finished out the night in relative peace. This event proved a blessing, mainly, even if it ushered in a New World Order for a dog who’s seen his share of turmoil in the last couple of years. And significantly, it underscored a thing we’ve suspected, seen overt signs of, even: Scout is smart.

I call Scout a Lab-ish because we really don’t know. At his first-ever checkup on our watch, soon after he came to us, Dr. Suzy-the-vet cupped his chin in her hands and crooned, “Oh, Scout! You are a Chessie!” The nice women who run the doggie day camp where Scout hangs out with his homies an afternoon a week corroborate this. “I’m keeping a Chessie for somebody right now,” quipped one of them not long ago, “and this is the Chessie personality: a little aloof and standoffish, not especially warm and fuzzy.”

Later I Googled ‘Chesapeake Bay Retriever’ to find out what I could about them, and learned, among other things, that they’re distinctly un-Labrador Retriever-like dogs—in fact they’re not tongue-lolling tail waggers, not what you’d call effusive at all, really, but instead discriminating in their alliances, skeptical at first: you might say they take a guilty-until-proven-innocent approach to people. Scout certainly fit that much of the profile. And even now he surprises us when he occasionally growls at somebody he knows. But there were pieces of his past his most recent family revealed to us that could also account for this standoffish little guy.

He could be the Lab-Golden mix as he was described in his ‘Take Me Home’ profile on the ‘net, but of course there’s no way of knowing for sure without the DNA test, which is costly and truthfully unnecessary. When I mentioned the ‘Chessie’ assessment to one of the rescue organization’s volunteers in a follow-up email about something else, she said, yes, it’s possible, but we take any dog into this rescue who shows any outward signs of possibly being a Lab.

Fair enough. And anyway, he is what he is: a shy and suspicious floppy-eared canine who is slow to make friends, at least of the human persuasion. Around dogs, Scout is not shy in the least. But that is a story for another day.

German Shepherd Dogs, at least the ones I have known and loved, and most especially my beloved Clarence-the-Canine, advertise their intelligence for all the world to see. It’s hard not to be drawn to a shepherd, with his familiar and quizzical head tilt (at the question you just asked, at the funny noise on the telly, or the Thing that just rustled the leaves outside the door) and his uncanny intuition, that sympathetic wisdom that shows itself when you are in distress and he somehow just knows it. That’s all to say nothing of his sense of loyalty to you, the person he’s taken on as his biggest work, and willingly. Clarence was able to fine tune this instinct so well that he knew he must make his peace with David-the-Chef when it was clear David was to be one of us, but he still assumed the role of chaperone, tenderly taking David’s hand in his mouth and removing it from mine when we were hunkered down on the sofa for movie night: sure, you can sit here on the sofa with us and watch the movie, but you can’t hold her hand. Clarence also knew what the running shoes meant, and what the vacuum cleaner might do. Once when I plugged it in he moved quickly around our little Vermont cottage and collected his chew toys in a spot where he could guard them from it. I did not arrange them this way for him, true story: 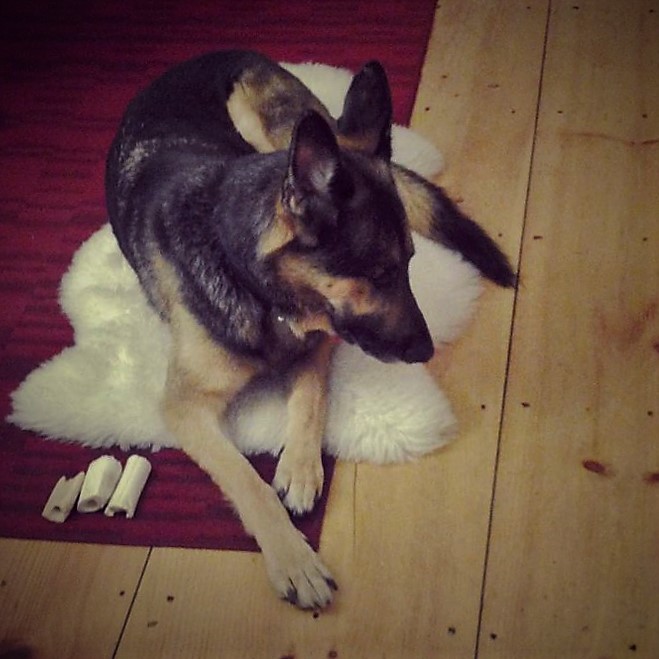 And there was the shepherd sense of humor that spoke volumes to Clarence’s intellect. One night I returned home from my erstwhile teaching job to find an exasperated David and a jubilant Clarence, who had made a game of David’s task hauling heavy firewood from a pile way down at the bottom of a steep hill, all the way up to the back porch of my loft in the woods, many, many yards away. Clarence followed along behind the wood-hauling sled and removed the logs one by one, dropping them bread-crumb style, so that David reached his destination with a fraction of the wood he’d loaded at the bottom of the hill, turning around to survey a landscape dotted with firewood and a tail-wagging shepherd.

Scout is not like that, not by a mile. He is our first Lab-ish dog, and as such represents a new chapter in canine adventuring. I grew up with a Westie, have lived with several Siberian huskies, and a few GSDs (one of them a giant boy, a Shiloh Shepherd), but never until now have I kept company for any length of time with a Lab, save one occasion when a neighborhood escapee showed up at my back door in Knoxville and made herself at home for a couple of weeks until her family reclaimed her.

We—Chef David and I—have observed something in Scout I think it’s fair to call a quiet intelligence. One need not shout to be heard, after all. Scout imprinted on me when we got him but wanted little to do with the chef or with the other part-time resident here, a teenager. When my own twenty-something kiddo showed up to help us move last October and November, Scout was mortified. Silly Scout, I told him, you’ll have no truer friend than this boy. Scout remained unconvinced but softened at least a little by the time the boy returned home to Tennessee a month later.

Days, weeks, and months passed. Scout settled into our new digs and adjusted to new routines inspired by the landscape and our proximity to work, among other things. And not long before we moved from a cramped rental into our much bigger house, I moved into a new office space at work, where Scout goes with me just about every single weekday. So he had change coming at him from all directions. And all the while the patient chef has continued to try winning him over, hand feeding the shy dog bits of beautifully grilled salmon, chicken, and other culinary delights, and through all that, Scout’s opinion of the tall man has remained more or less the same, with some palpable evidence of thawing relations: you are my friend on the sofa, not to be trusted at most other times.

The most delectable change for Scout in the new house, though, is access to the human bed, unattainable at our old place, thanks to one menacing spiral staircase. Still, no dog who lives with humans can snap at them, however diligently the humans are working to make the dog feel welcome, included, like a family member, and all that. Getting kicked out of the human bed is simply a natural consequence of bad behavior, something I once reminded my human kid, and now repeat to this shy little dog.

Something interesting happened, though, when we were about five nights into the new sleeping arrangement. Scout started in his happy place, comfortably wedged between us on the bed for some late-night schnug, a thing we’ve allowed to continue until lights out. We still want him to feel like the family member he is, after all. But then after a little while, he jumped down and put himself into his own bed without provocation. And then early the next morning I could hear him padding quietly around the room, first to my side of the bed, and then to David’s. Scout could not see me for the height of the bed and the covers that obscured me, and David was sound asleep, so he went back over to his own bed and settled down. Then a while later when he sensed us stirring, David gently tapped the bed with his fingers, and Scout jumped up and wedged himself happily between us, with his tail wagging endearingly against the covers.

So it seems that in less than a week Scout has figured out the New World Order: I can hang out with them on the bed, and then down I go. And I can’t come back up until I’m asked.

It’s a tall order for a complicated but intelligent dog, who appears to truly get it. And it’s a relief to see him once again fitting comfortably into his britches.

4 thoughts on “Dog Story: The Quiet Intelligence of a Little Lab-ish”