Me at age 4, sitting at mom’s childhood piano

When I disemboweled Knoxville Ballet School, liquidated it in the summer of 2012 just before my divorce was final, I was flush with pianos. Shortly before his death, my Uncle Stan had implored me to take the piano from my grandparents’ house in Chattanooga, the one he’d grown up playing before he launched himself into a professional life as an orchestra conductor in NYC. At first I declined, and then later had a change of heart. Stan died before I opened the ballet school, a thing I know would’ve thrilled him to no end. But my decision to bring live piano accompaniment to classes at the school would have sent him over the moon. The piano was an old upright that needed some work; Stan knew this and advised me to seek out somebody qualified to fix it, insisting there was still much life left in it, and he didn’t think it would take a monumental effort to make it play well again. Pianos don’t hold their value (I’m sure some specimen Steinways do, but this piano was a distinctly proletariat instrument). I didn’t want to pour precious resources into it if it was a lost cause, but finally decided this risk was one worth taking. So I had the piano moved from our living room at home over to the ballet school, and consulted a musical family at KBS, who in short order put me in touch with one Matt Coker, master piano technician, jazz pianist, and owner of Knox Music Studios. Matt gutted my family’s piano, more or less rebuilt it from the inside out. It was not exactly cheap, but as Stan had predicted, the piano sounded good when the job was done. 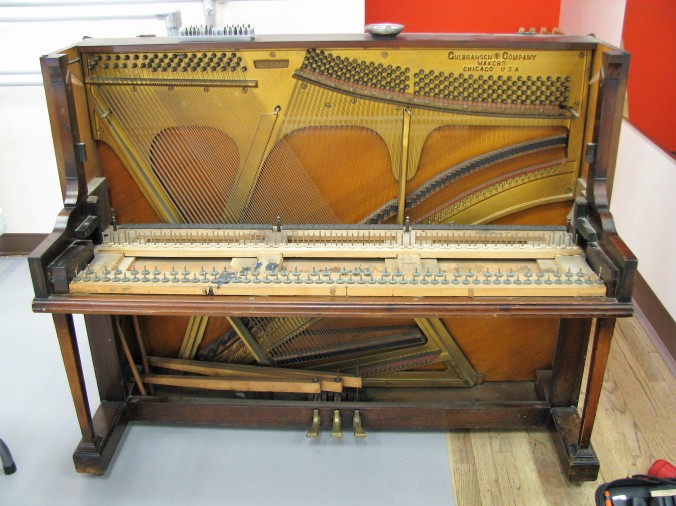 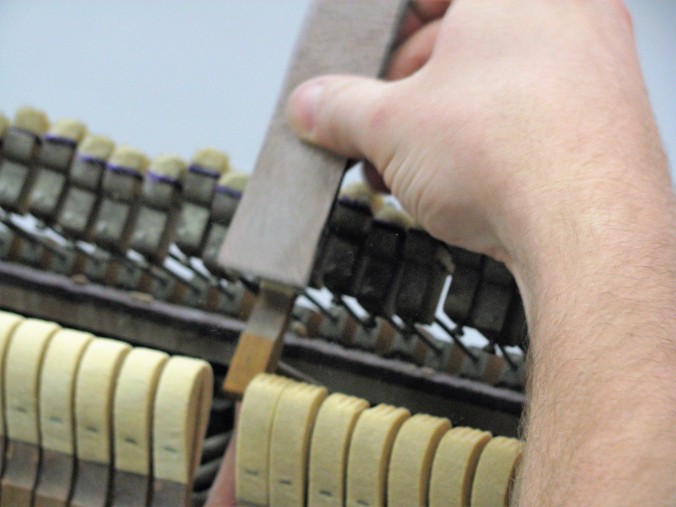 Bringing live accompaniment into the school was a dream come true. After the first leg of my teacher training at American Ballet Theatre, after observing all those beautiful classes and meeting several pianists in person whose recorded music I had long used in my own classes, I got a bee in my bonnet and wondered whether I could figure out a way to do this thing; after the second leg of my training the following summer, I was sure I had to do it. I enlisted the help of three well known accompanists in NYC: Michael Cherry, Miro Magloire, and Steven Mitchell. With their combined wisdom in my pocket, along with some carefully chosen sheet music, I started looking for candidates and before long rounded up two young women, accomplished pianists who were willing to learn to play for ballet class.

There was more to asking them simply to sit down and play something, of course: there is no one-size-fits-all paradigm for accompanying different class levels, from five-year-olds through fifteen-year-olds. And playing for ballet class is its own special challenge: there are certain time signatures that work well for particular exercises, and the teacher and the accompanist must learn how to communicate with each other—no small thing. I learned this in my ballet pedagogy training: asking for a waltz is not enough. The teachers at ABT would instead hum a few bars for the accompanist, or at the very least, give them an idea of tempi and time signatures—even simply clapping what they wanted (rapping out da-DEE-da-DA-da-DEE-da-DA-da at a particular tempo on the top of the piano speaks volumes, you might say). The accompanists would nod and then magically play something perfect—most of them without so much as a stitch of sheet music, but with so much music simply imprinted in their heads after long years of playing for class.

The benefits of live accompaniment for a young dancer are countless. And for the little ones at Knoxville Ballet School, by the end of the first year in Primary Level, each understood the basic time signatures we used week to week after our counting and clapping exercises. And during their improvisation exercise, each had learned to approach the accompanist and ask politely, Can I please have an allegro? or, Can I please have an adagio? And by the end of that first year, my accompanists and I understood each other well enough that I could simply speak faster or slower after the first few notes and they would tweak the tempo to match it. Giving a developing dancer exactly what they need for musical accompaniment is not only a wonderful sensorial experience—it can actually influence the shape of a dancer’s musculature, because you’re not simply ‘making do’ with whatever is on the CD or MP3. In short, dancing to live piano accompaniment brings a level of enrichment to classical ballet training that’s worth its weight in gold, as it did at Knoxville Ballet School.

Not long after I moved that piano to Knoxville Ballet School, my brother called and asked if I wanted our piano—the one that belonged to my mom as a child, and that I learned to play, and then my brother after me. I had wanted it for many years before that, and answered yes without hesitation. We put it right in the empty spot where Stan’s piano had stood. Perfect. I never did much with my own piano training after childhood: my own lessons ended after a few years, along with other avocations that fell by the wayside to make room for my classical ballet training, which trumped everything. But I was competent enough to play simply for my own enjoyment. With the piano in my possession, I ordered some simple Gershwin arrangements and came home from teaching, poured a glass of wine, and sat down at the piano many nights each week.

After life as I’d known it for more than two decades ended abruptly, and when I took the teaching job in Vermont, the piano came with me: I offered to lend it to the school where I’d be teaching so the director there could do what I had done in Knoxville. I had already been down that road, was loaded with resources, and pledged to help bring live accompaniment into the classroom once again. In the end, the director lost her resolve and couldn’t make the commitment. So the thing that once brought me so much joy now felt like a giant—and weighty—ball and chain. Truthfully, had I known how things would unfold, I’d have returned the piano to my mom. Instead I had no choice except to squeeze it into the living room in my first tiny cottage home in Vermont’s Upper Valley. 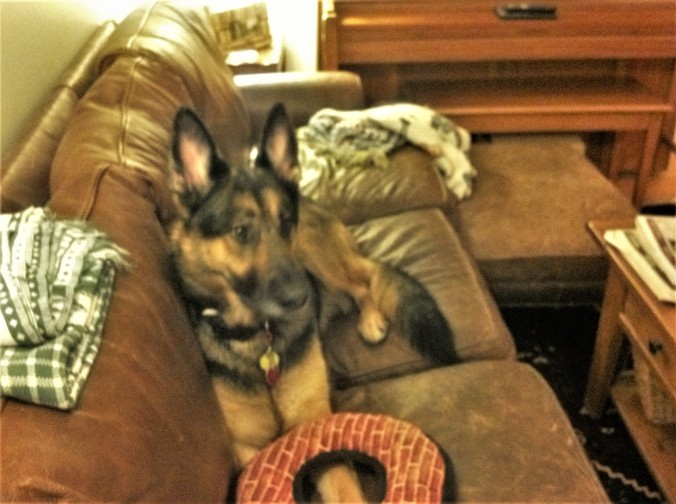 Clarence-the-Canine, with piano against the far wall

Then it followed me to the beautiful loft in central Vermont where I lived for about a year and a half—but where I had no choice except to abandon it in the downstairs garage. Some four and a half years later it continues to languish there. I had no resources to move it when Chef David and I combined our households and I stepped out of ballet teaching shoes and into digital copyediting shoes. I phoned mom to tell her I’d need to leave it behind, maybe donate it to a worthy cause; she was justifiably upset.

I want my piano back. I believe I’m finally in a place where I can go and collect it. I’ll need to find someone who knows how to move a piano. And it’s a long way off, a skosh over two hours. My guess is that overwintering in a basement garage for several years has not helped it. But I have the legacy of Uncle Stan’s piano, its renaissance, to hang my hopes on: my own piano started out in much better shape than his was in when it came to me. So surely, surely, whatever Vermont winters have done to it can be, you know, undone.

Stay tuned, even if my piano has not. As I insisted in my first-ever story on this blog, published on December 29 in 2012, this is not how the story ends. Oh, and as for Uncle Stan’s piano: I donated it to Matt Coker and Knox Music Studios, knowing Stan would approve of new generations learning to play on it.

Me sitting at mom’s piano, age 9