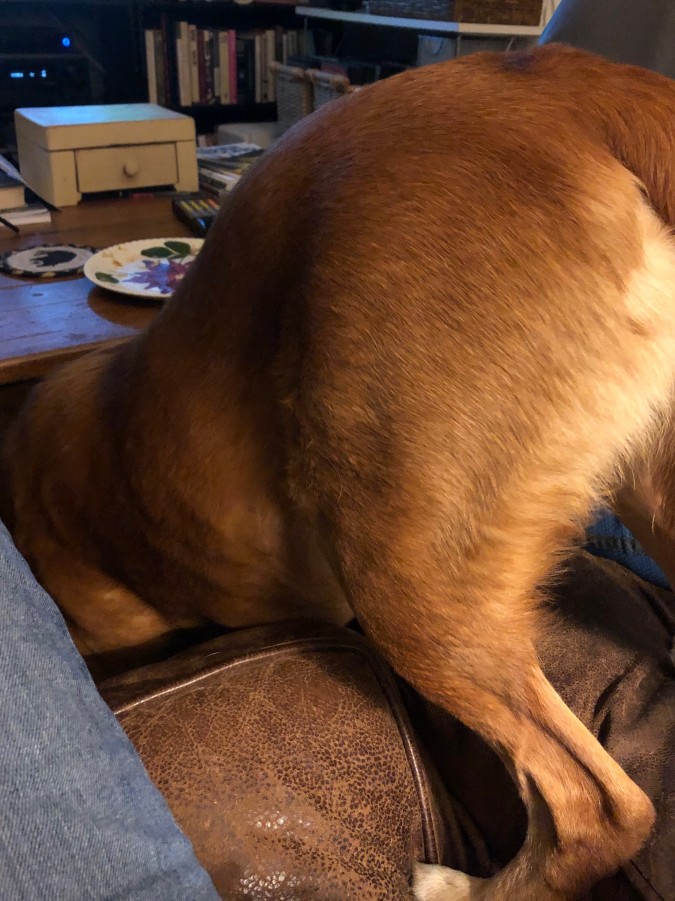 <not quite> dock diving

There’s a little piece of conventional wisdom that goes something like, know your limits. If you’re a parent, then you know this truth applies also to your child’s or children’s limits: Everybody wins when you understand what you can reasonably expect of your kiddo—and what you can’t.

Turns out the same thing’s true for doggies.

A few, maybe three weeks ago, we enrolled one Scout-the-Goldapeake-Retriever in a ‘newbie’ session at our local doggie dock diving facility. A couple employees of one of the clients at the marketing agency where I work had been encouraging me to try this with Scout because it’s pretty clear from his tiptoeing forays into the Battenkill River he’s a water-lovin’ doggie. Made perfect sense, after all, because the week he came home with us his vet looked into his eyes, cupped his chin in her hands, and told him, Oh, Scout! You are a Chessie! If you know anything at all about the Chesapeake Bay Retriever, you know he is a hardworking breed made for the water. And even though Scout has something else in him too, it’s pretty clear his genetic makeup includes some type or types of retriever.

And anyway, we decided dock diving might simply be a fun extracurricular for him.

But I don’t have photographic evidence of our trial run, so you’ll have to take my word for it. This is because you can’t really participate in dock diving with your dog and photograph him at the same time, unless by some chance you happen to sprout an extra couple of limbs. We did have Chef David’s college-age kid Maxx along for the occasion, and he happens to be quite the accomplished photographer, because that is his thing.

Photographic evidence of Scoutie going dock diving, though, also requires him to have actually…dived. Humor me for a moment and let me put some human words and emotions on my dog. After we rolled into our parking spot, leashed up, and signed in at the gate, our conversation went something like this:

Me: Scout—look how much fun all the other doggies are having diving into the big pool!

Scout: It’s hot out here and there’s no shade. Can we go now?

Me: But the water in the pool is nice and cool—it’ll feel great, you’ll see.

Scout: There is a man wielding a large stick, and it is scaring me. (Scout has an excellent vocabulary.)

Me: That’s just the device to scoop toys out of the pool, silly: See? It’s not scary at all!

<Dock Guy is now swinging a gigantic boom over the pool, with a toy attached to it.>

Scout: <attempts to climb under my legs> Holy mother of dog: What in hell is that thing? Let’s go home, please!

Me: Don’t worry, babe—nobody expects you to go after that. It’s for the Advanced Dock Diving Dogs. You have to work your way up to that—today you’ll only get your feet wet. So to speak.

And then it was our turn. Dock Guy explained the rules and led us up the steps to the platform. But first, instead of asking Scout to dive off the platform, we’d need to walk him down the ramp the dogs use to climb out of the water, to show him his point of egress. Seemed like a good plan.

Rather than taking the ramp down into the water, though, Scout merely tiptoed in until his paws were barely wet, and then backed his way right up, surveying escape route options.

We tried different approaches, with me at the top of the ramp and Chef David down at the side of the pool near the bottom of it, and vice versa, and with the somewhat intimidating Dock Guy behind Scout (ostensibly to convince him going down the ramp and into the water was the smartest choice and in due course would show him just how not-scary the water was). Dock Guy asked me whether I brought a toy. Yep, I said, I bought a new floaty toy just for this occasion. Well, then, toss it and see if he’ll go into the water after it, he suggested helpfully.

Hmm. Now here was a dilemma. While Scoutie is almost certainly some kind of retriever mashup, in his nearly three years with us he’s shown exactly zero interest in actually…retrieving…anything. The only time I’ve seen him go after a toy someone tossed was inside the giant outdoor enclosure at the doggy camp he attends one day a week: When a camp worker lobs a ball across the vast expanse of lawn, Scout is more than happy to join the pack of pooches chasing after it, although not so interested in getting it. But at home, or in the park, you can throw all kinds of things for him to go and get, and unless it’s a beautifully sautéed piece of fish or chicken, fuhgeddaboudit. I’m not sure what I was thinking, but I suppose I decided the allure of the water would be enough to convince him to jump in and go for it.

Dock Guy proceeded to shame me at this point: You probably should have brought a favorite toy, he lamented, and not something new he doesn’t even care about. And in all honesty, he went on, if he won’t go after a toy you’ve tossed at home, he’s not likely to here.

Then came the consolation prize: He can at least enjoy swimming, said Dock Guy, if we can convince him not to be afraid of the pool, and then you can come to our swim sessions.

We volunteered to go take a seat on the bleachers and give the other newbies their turns, because at this point, we were treading perilously near public humiliation territory, and that’s a place I’m loath to go. We watched with interest as one after another novice took to dock diving like a fish to water. Scout mainly whined that this whole thing seemed pointless and he was ready to go home now, thanks.

Then Dock Guy pantomimed for us to come and try again. By this time, though, Scout had evidently worked through a pretty clever strategy to avoid the water altogether. We climbed the steps, walked across the platform, and then through the little gate leading to the ramp, where once again I tried to gently coax him into the water. The Chef and Dock Guy were standing on the sidelines, encouraging Scoutie to go-for-it-c’mon-you-can-do-it and cheering him on with other ostensibly motivational trumpeting, while Maxx adjusted his fancy camera to get some great shots.

Scoutie stood there panting in the heat, glancing at the pool, back at me, down at David, trying to ignore the scary Dock Guy (who was a man AND a stranger, and thus extra dodgy). And then in one lightning-quick and beautifully agile move, instead of navigating his way down the ramp, he leapt from the platform and over to the edge of the pool itself, and using the PVC railing as his launch pad, exploded off into space, away from the bothersome pool, and the crowd of people standing there watching, before finally reaching the reassuring safety of the ground below.

Dock Guy stood there with his mouth agape, and when he finally found his words, informed us no dog had ever done that before. Ever.

Well played, Scoutie. And yes, we can go home now.

When my human kid was five, we—my ex and I—enrolled him in soccer, because, that’s what you do in Knoxville, Tennessee with your five-year-old. We assumed he’d want to do it, never mind that neither of us had ever played as kids, because he’d be swept up in the fun, surrounded by friends, and all that.

But on the Saturday morning when we had our first game, he seemed out of sorts. Hot, sweaty, disinterested. It is possible we’d unknowingly added pressure to the moment because one of his godparents had been a writer for Sports Illustrated, and had actually penned an entire book on soccer for kids. He was interested to know the outcome, although in fairness, had lobbied for a different league than the one we chose. Our league, though, was at least full of kids we knew, the coach was a friend, and practices were in a park about three blocks from our house. When you’re parenting a difficult kid, you try to make things like soccer practices as easy on yourself and him, and as uneventful, as possible.

On this Saturday morning, though, our sweaty little peanut kept randomly wandering off the field and onto the sidelines. His dad urged him back on: No—go play! Go and dribble the ball down the field!

And so he did—he actually got ahold of the ball and dribbled it down the field.

Then he turned and announced to us loudly and triumphantly, I DRIBBLED THE BALL. I HATE THIS STUPID DAMN GAME. CAN WE GO HOME?

I always wondered whether there was something flawed in my approach, some intonation or demeanor that set us up for failure when the boy was growing up. And could it have been the same flawed approach to rear its head again at the dock diving facility a few weeks ago? No, I think we tried and now we know Scout’s limits. We would not have known them had we not at least tried.

For his part, my kiddo discovered figure skating on his own, about five years after his brief moment in soccer, and skating became his thing for the next several years. As for Scout, I think he’s content to take up a sphinxlike position near the patio, and watch over his back yard, to chase the occasional errant squirrel or unfortunate cat who wanders into it from time to time, to endlessly play in the snow during our long winters, to wade into the Battenkill when the opportunity presents, and to go for cool-weather morning runs with his human lady. But mainly, mainly Scout possesses an impressive aptitude for devouring belly rubs and any number of tender morsels hand fed to him on any day of the week.

Or to go diving for them, as the case may be.