Not long ago during an afternoon break between job one and job two I sat in a quirky White River Junction coffee shop thinking about my Clarence-the-Canine, reflecting on images in my mind’s eye of the unmistakable changes in his gait over the last few weeks.  Then I did what you’re not supposed to do:  I opened my laptop and started Googling his symptoms.  I had wondered about the possible emergence of hip dysplasia, which is not uncommon in shepherds and other large breeds.  But I found it odd that the onset of these symptoms–a drunken clumsiness, mainly, gathering instability in his back legs, and “bunny hopping” while running full tilt, where the back legs push off in unison instead of one after the other as they should–corresponded more or less with my (temporary) retirement from running this past September.  Why would he get worse if we were not running?  If he had hip dysplasia, wouldn’t rest make him feel better?  This was a disquieting notion.

It did not take long to come across an insidious condition known as Degenerative Myelopathy.  I will not elaborate other than to say this is a genetically acquired neurological affliction that begins in the thoracic spine.  It is common in Shepherds and a few other breeds, and there is no cure; the eventual outcome is paralysis followed by death. Probably the most damning and disheartening evidence I found of DM was video footage of another beautiful shepherd whose symptoms so closely resembled Clarence’s and who was euthanized only a day or two later. And there’s the rub:  the only variation among cases is progression–days, weeks, months, years–there is no way to predict or know for sure how long it will take for the disease to progress to the point where a reasonable quality of life for the dog is beyond managing.  Mercifully, there is no pain associated with DM.  Mercifully.

When I got home later that night I continued to surf the Web, looking for something that would affirm or deny my armchair diagnosis.  I did some more reading.  I messaged back and forth with the German Shepherd Rescue director for a while–someone who knew this dog so well and had fostered him.  She asked me to take one of his back paws and intentionally make it “knuckle” under, so that his weight was on the knuckles and not the pads–did he attempt to right it, or just stand there on his knuckles, she wondered?  He righted it, but his response time was very slow.  Was his gait odd on one side only, or both?  Was he bunny hopping?  I was close to hyperventilating.  She urged me not to freak out, that he would pick up on my stress, and told me there were other things that could explain his symptoms–to let the vet take a look as soon as possible.

There is no reliable diagnostic tool for Degenerative Myelopathy–all that can be done is to test for the gene in parents and determine the risk factor for future generations.  Once the symptoms manifest, the only way to diagnose is to rule out all manner of other problems, and then assume that you are probably dealing with DM.  A couple of days later found us in the vet’s office, where Clarence spent the day while I was at work so that he could be examined, x-rayed, and observed.  Yes, the vet said later when I came to get my steadfast companion.  It is likely DM.  But she wanted to do a full blood panel and urinalysis to rule out everything. This is ultimately what came to pass.  Ironically, his hips are beautiful–there is no sign of wear or dysplasia.  One xray revealed a small pellet or BB lodged in his left hip where someone shot him during his mysterious past.  But Clarence’s blood work revealed an otherwise perfectly healthy dog, dammit.

Probably the most difficult thing for me to hear–other than the diagnosis–was that the onset of his symptoms probably occurred because we stopped running.  My heart sank.  Our kind and wonderful vet assured me that running would not have kept the disease at bay forever; eventually it would have emerged no matter what.  She went on to explain that if I could at least get him some exercise every day the DM might slow down, but no promises.

I felt like a miserable failure of a human.  Stupid foot injury that has plagued me for years.  Stupid ex-husband-who-has-not-paid-alimony. Stupid economy.  Stupid <failed> healthcare reform.  Stupid work situation.  Stupid winter in Vermont with ridiculously short days bereft of running (or walking) light.  Stupid everything and everybody.  I have given up so much in my life lately.  Now I have to let go of my companion dog, too?  It is irrational, I know, but as I walked away from the vet’s office I felt I deserved a moment of infantile behavior.  I climbed into my car and blubbered like a baby; I went home and blubbered more.  I loved on my dog and gave him peanut butter. 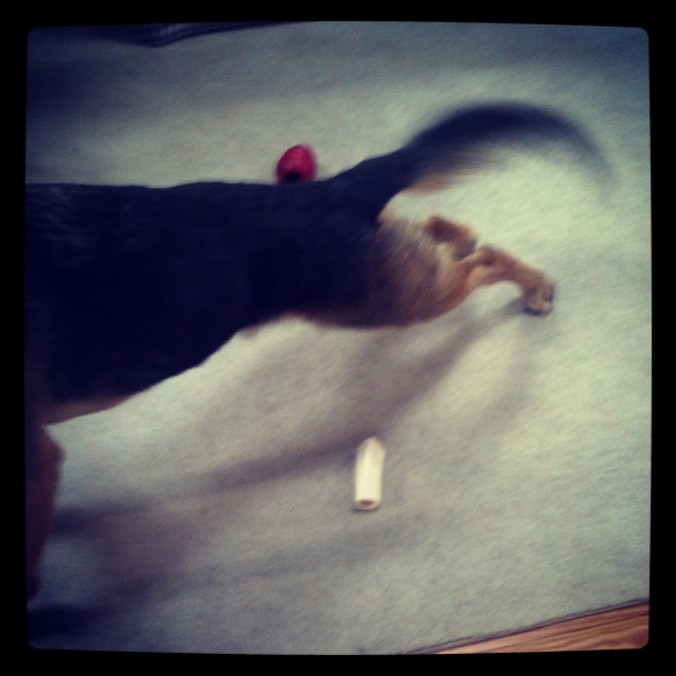 In the morning I nodded to our new reality and began to wrap my head around what was coming down the road for me and for Clarence.  For the time being I am watching him closely.  He is still ambulatory, but he has taken some bad spills.  He is not incontinent yet, but he has difficulty there, too, because he has a hard time supporting himself in tricky positions.  And I wonder about this creature who considers me his work, whether he will fret about his perceived ability to look after me, silly boy, if he is somehow compromised.  My gut tells me I will find one morning that he is uncomfortable, and scared, and it will be time to say goodbye.  I have been down this road before several times with other dogs.  What makes this time different is being the sole decision maker, with only my own instincts and ability to read Clarence to guide me.  I hope we both will know when.

21 thoughts on “Knowing When”