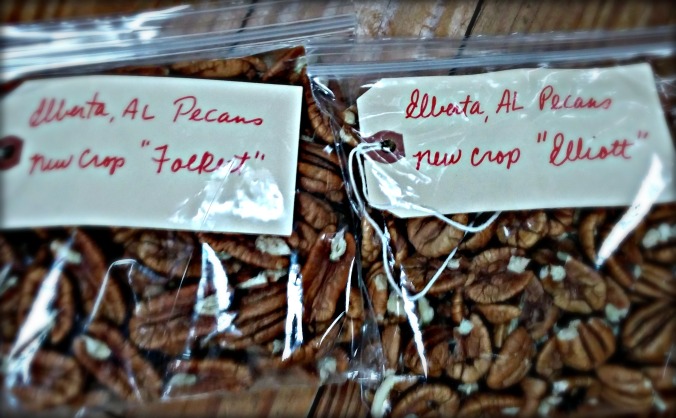 One of the best presents ever, those pecans. My dear friend Bett sent them to us last Christmas; she said she gathered them from the bumper crop on the ground under two pecan trees near where her mama lives on Alabama’s Gulf Coast. I saved the tags and stuck them to the walls in my work cubicle, a daily reminder of so many wonderful things. I think about Bett when I see her sweeping hand in red marker; I am sentimental that way. I also think about her when I swill my coffee from a fabulous little vessel imprinted with the familiar “M” stamp on the bottom, her signature bear-and-honey-bee motif marching around the outside of the mug. Bett is an American folk artist with distinctly modern sensibilities; her forebears would be proud to count her as one of their own. She is also a diligent student of the South, and I love that about her.

As for the pecans, they did not last long: you can’t get anything approaching the flavor or texture inside those exquisite little kernels up here in these parts. But the union of Southern pecans and Vermont maple syrup? That is salvation, right there. (Still working on teaching Handsome Chef Boyfriend the proper way to say it: p’cahhhn, with a nice, soft ahhh, accent on the second syllable, instead of PEEEE-can, much harder on the ear. There is work to do yet.)

I miss my Southern friends; I knew there’d be casualties when I packed my bags and left home for good. I’ve been a poor correspondent, but everybody’s busy and life has a way of insinuating itself despite one’s best intentions. (Somebody had the gall to say this aloud at a going-away party for friends many years ago and everybody in the room was shocked; I don’t know why—it is the truth.)

It’s not just that, though: seems once you reach a certain place in your life it’s a big imposition to ask for a new friendship, perhaps impossible to forge relationships of the kind that unfolded naturally earlier in life. I know there are exceptions, but it still feels more challenging now than it did way back when; nor does the scattered configuration of the population here help any. And because the tap root I yanked up in 2012 still has a ways to go before it’s reestablished in new soil, I’ve been gun-shy about seeking my “tribe,” if it even exists. I don’t have a church family as I did in Tennessee; my child is grown and lives a thousand miles from me and so I don’t have a place in any of the powerful communities parenting seems to foster; the ballet school I founded in 2006 is long gone; and I have not set foot inside a ballet classroom since October of 2014.

There was a loud rip in the universe in January of that year, my second year as a Vermonter, when I lost my Clarence-the-Canine to degenerative myelopathy, an insidious neurological disease which ‘til then had slept quietly inside him unbeknownst to anybody. This may seem trivial to anyone for whom the companionship of a dog means little or nothing.

The death of my steadfast companion was not all. At the time I was living in a beautiful part of Vermont on 180 spectacular acres where woods, water, meadow, and mountains intersect to create nothing less than a sublime landscape. My loft home was open and sunny and inspiring, truly delightful in most ways, a rare opportunity that came to me by way of a ballet school colleague. Had I any notion I might live in this place after my colossal 2012 reboot, my heart might have leapt, a little.

But had I occasion to reflect on living in complete isolation there without my dog, and with few Vermontish winter survival skills (I must underscore this: surviving a rough Vermont winter alone in the middle of nowhere, however intoxicating the surroundings, requires a certain savvy no novice from the South possesses), I might have reconsidered my course. And in spite of being in a comfortable spot in my still-new romance, I felt the most intense loneliness there I’ve felt in my life, ever. My colleague assured me her land had healed many folks, situated as it was there in Vermont’s beautiful Upper Valley. I never doubted her, but healing seemed to elude me. No amount of HCB’s cajoling in our epic nightly phone calls would convince me otherwise: I was in a terrible financial bind and completely alone, anxious as hell to get out. (And anyway, HCB was two hours away on the other side of the state: it may as well have been a million miles.)

It does not take much to set me off even now: a song that was popular at the time, a smell in the air—these things raise my hackles and set me on edge. The truth is I could not see the forest for the trees, and that is all. But the brief chapter (really just a couple of sentences) that still arouses dread when I have a half-second to reflect on it, continues to change shape as viewed from a greater distance—even a minuscule change in focal length can yield a very different image, a reality I observe each time I pick up my camera. I think I failed to recognize healing is often uncomfortable; it occurs to me now that healing is probably exactly what unfolded there, in the little house in the middle of nowhere.

In 2012 I walked away from unhappiness holding an empty bag, equivocating some, wringing my hands mostly. A dear friend held this question right in my face: Isn’t your freedom worth it? Yes, probably, though I could not have imagined the monumental challenges I was about to face. But does not the void left by something of towering importance imbue that thing with still deeper meaning, make it still more worthwhile to have? As HCB said to me shortly after we met, some things really are worth waiting for.

It’s undeniable—I’m in a better place now than I was a couple of years ago, and if you asked him, HCB would most likely agree the same holds true for him. I spend a fair amount of time yearning for things lost, things still beyond reach, and a few things perhaps unattainable (never quit trying); so does he, with less fervor than I—he is far better at rolling with the punches. It is possible we might even covet a few things. I don’t think that’s unhealthy.

Yesterday we pawed through some stuff in our storage locker, disappointed to find interlopers of the rodent variety had made a big mess and destroyed a few of my belongings; there is probably more destruction buried deep inside the locker, judging from the extent of damage on the surface. (It’s a continuing theme around transitions: move your things, store them, move them some more, and there will be damage and loss, guaranteed.) But there is also this: next weekend we’ll finally achieve this monumentally important thing we’ve missed for nearly three years. It’s most definitely worth waiting for, and it’s about time.