Time for a c 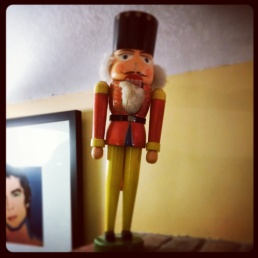 hange. Not How The Story Ends served its purpose, saw me through the thousand-mile journey which in so many ways continues. And although I think the overriding message there is one of hope, it is still a bit backward looking. My hope now is to live in the moment and tell stories that are relevant to the present, with a nod to the people who helped me arrive here.

To that end, I have a new story to tell about my Uncle Stan, to whom I was especially close the last few years of his life while he struggled with a cruel illness. We made a lot of discoveries about each other in those years in spite of the fact that most of our communication happened in lengthy late-night email exchanges—I in my basement home office, and he in his basement home in NYC. One of those discoveries was that we each loved writing, hungrily—something I did not know about him growing up.

Stan was a classically trained musician, an orchestra conductor who spent a number of years in that capacity at Light Opera of Manhattan, or LOOM, as it was known to many. Years after its demise, but not so long before his death, he made a brave trip overseas under what most would consider challenging circumstances to conduct a final Gilbert and Sullivan festival in Great Britain. His decision to do that made him my hero, hands down.

He documented his travels in a witty three-part manuscript he called Down in the Pits at Buxton, sending me all of it in pieces. We talked at length about it while he was writing, and afterwards. We did not talk much about his illness, but it was somehow always there in the room with us. He died just before my return to classical ballet after a long absence; he did not see the beautiful ballet school I founded in Tennessee in 2006. I gave the eulogy at his memorial service.

Uncle Stan left a few cherished belongings to me by way of a lifelong friend of his in the city, including the Playbills from every single Broadway show he ever attended. I have them packed away in boxes and some day will decide what to do with them. But I think Down in the Pits’ time has come, and I know he would be happy for me to help be his voice. I will dig it up and share some or all of it, as I think it should be.

And I will have plenty of other stories to tell besides.~Deb

About the photo: Stan gave me that doll when I was eight as a monument to my first time on a big stage, in a big venue, dancing in Nutcracker alongside my ballerina mama. He now lists a bit to one side and is showing signs of male pattern baldness. I now also list a bit to one side. But to quote Mr. Sondheim: I’m still here. And so is Herr Nutcracker. And so is my Uncle Stan.