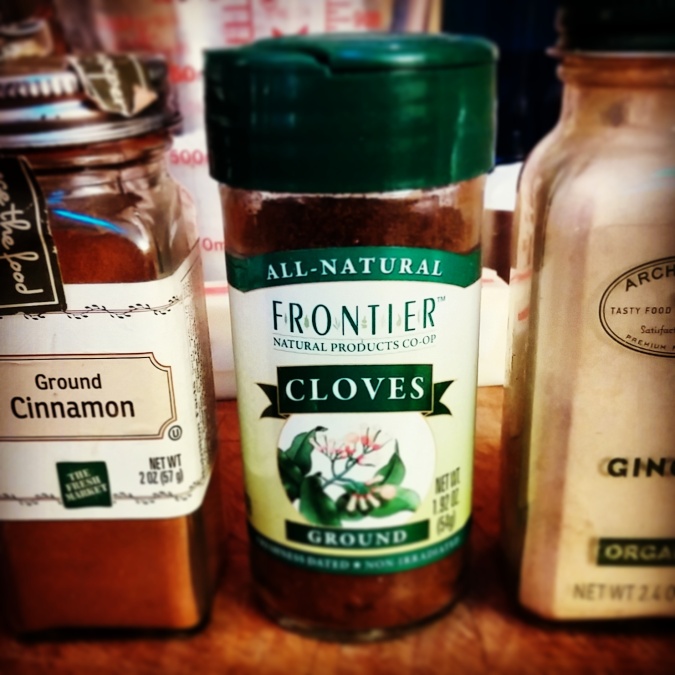 Today I had a huge, long list of stuff I planned to do. Some was work related, some was house related (actually most was house related), and there was the usual catching up on correspondence. Handsome Chef Boyfriend’s mandate to me as he was leaving this morning: go out and pick up sticks. (Manly Vermonter translation: get ’em now, you are almost out of kindling, and don’t be whining to me about it when the lawn is buried under ten feet of snow.)

I did try to pick up sticks. I’ve been under the weather for the last week, though, and every time I swooped down to grab one my head felt like it was exploding off my neck.

So I did the sensible thing and went back inside and baked cookies.

I had all the ingredients for molasses cookies and decided that since they have molasses in them they must be health food. (Ergo, cookies equal health food.) Lately my life has felt distinctly un-mise’d en place. During an afternoon phone chat I whined to HCB that I have felt unsettled for three years. Would I feel the comfort of being settled, ever again? He assured me I would.

Mary Ann’s Molasses Cookies came out of my mom’s third grade cookbook. I remember that rumpled book, its faded blue pages held together with faded ribbon, a contribution from every member of the class therein. (Betcha anything she still has it.) We made those cookies all the time when I was a kid. The summer before my sophomore year in college I sat down with pen in hand and copied recipes I wanted, from that book and others, so I’d have them in my very first apartment. My own collection is looking pretty aged now.

My mom did not own a stand mixer when I was growing up. We mixed the batter with a wood spoon and it was stiff as all get-out. This afternoon while I watched the mixer whir around, effortlessly blending the flour and egg and gooey molasses, I wondered about Mary Ann. What kind of a kid was she? Was she nice to my mom? (Was my mom nice to her?) Is she still alive? What did she do with her life? Was it a settled life? Did she marry and have kids? Did she divorce?

One thing I know for sure. That cookbook was a product of WWII-era Oak Ridge, Tennessee, where my mom and her family lived at the time. Her parents, and her grandmother (my great grandmother Gracie) all lived under the same roof in G.I. housing and contributed to the war effort in one capacity or another. My great grandmother was a librarian, and my grandmother was a lab technician, each of them at Oak Ridge National Laboratory, where the bomb that would end the war was in development. I am fairly certain their lives did not feel mise’d en place, either–probably not many Americans could make that claim.

Another thing I know for certain. Neither mom nor Mary Ann had Silpat. What a glorious invention. Had the outcome of that war been different, maybe none of us would have Silpat. (All hail Silpat!) Have a molasses cookie, on me.

Preheat oven to 375º. Mix and work with hands or mixer. Form into small balls. Roll in sugar. Bake 15 minutes.

Yield: depends. How big are your balls? (Ha.) And how much cookie dough did you eat while you were baking? (Please, no sanctimonious speeches about raw eggs–you know you do it, too.) 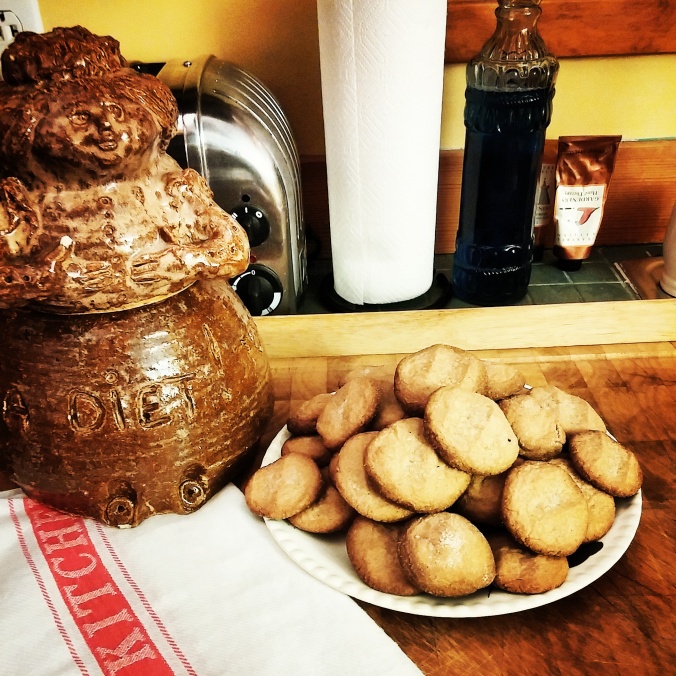 Note: the cookie jar was made by a Memphis potter and sculptor named Ellen McGowan; my mom bought it at a crafts fair on the lawn of the Pink Palace Museum in the mid-1970s. (It says, Tomorrow I go on a diet!) My dad once told Gelsey Kirkland that we lived in the Pink Palace while he was schlepping her around town during one of her many guest appearances with Memphis Ballet. She believed him. True story.