It’s track and field season here in New England; maybe in other parts of the world, too, not sure—this is well outside my life experience bubble. ‘Tis also the season when Handsome Chef Boyfriend morphs from pastry chef by day to pole vaulting coach by afternoon and the occasional weekend, true story: he coaches invincible young folk who run like crazy with a long, bendy pole, then jam it into the ground and somehow try to heft themselves many feet up, up, up into the air, and then twist around, and clear a horizontal pole without knocking it off. Sometimes they actually make it.

For about a decade H(PVC)B has been coaching high school pole vaulters; this year he was asked to work privately with an individual student, a talented freshman at Southern Vermont College. There he is, the boy in the yellow jacket, young Isaiah. On Saturday Isaiah and one other SVC student competed in the New England Division III Outdoor Track and Field Championships, accompanied by a gaggle of coaches and some well-wishing teammates who did not make the cut for this event which in turn was a qualitfying event for a bigger meet next weekend: the Eastern College Atheltic Conference Divsion III Track & Field Championships. 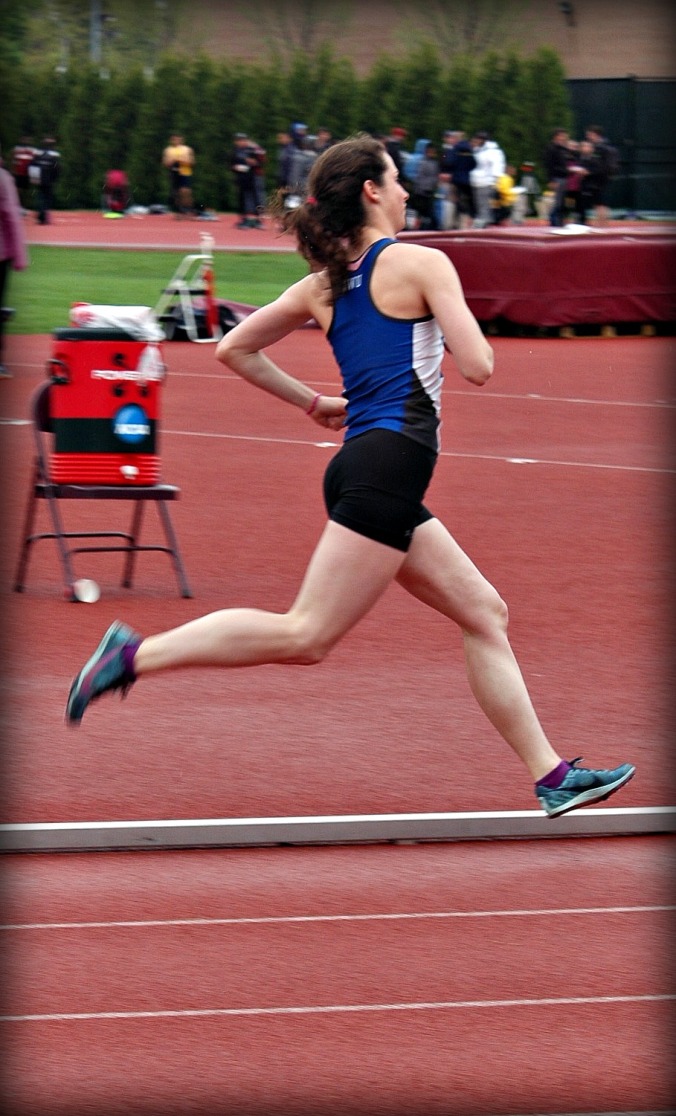 Being the consummate ballerina, I tend to notice bodies and there were some pretty, sinewy, lean ones in Massachusetts at Springfield College for Saturday’s meet. Being there among them made me wish I’d discovered the joy of running much sooner than I did in my late thirties, like maybe when I was a young college student. But even then I am almost certain nobody could have convinced me to pole vault. 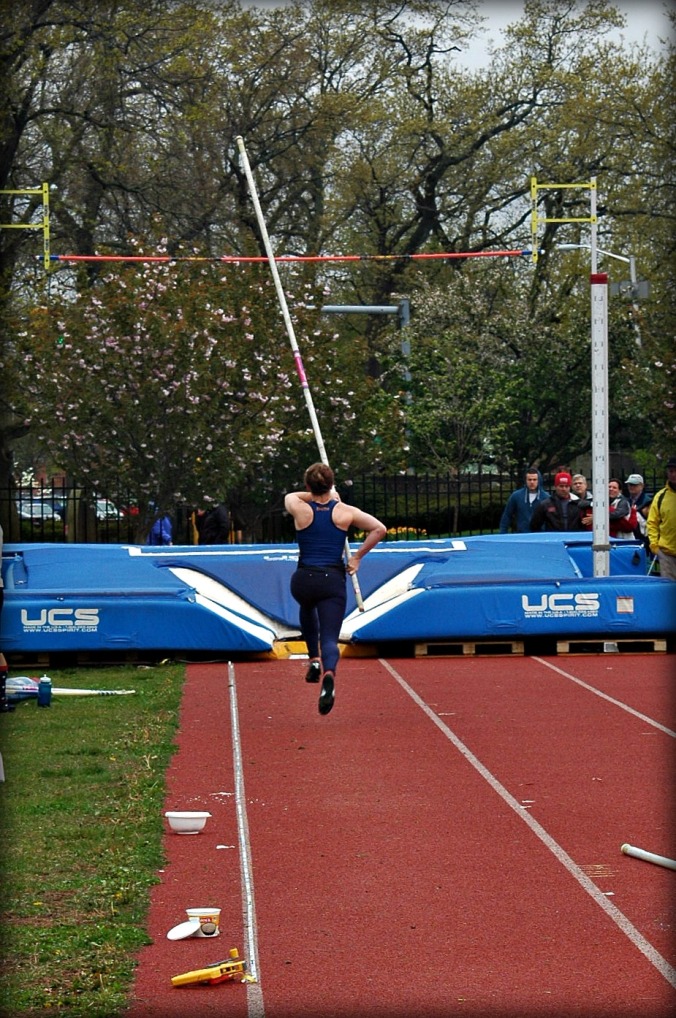 Yeah, not so much.

But I digress. Saturday was cold, gray, rainy, generally unpleasant. There was a lot of standing around and waiting for things to happen, which I have learned to expect at these kinds of things. I parented a figure skating kid and was spared much waiting around at athletic venues, except for one weekend a year at the local ice rink; hat tip to parents who routinely tolerate it.

After an eternity the men finally had the so-called runway and “pit” at their disposal for practice vaulting ahead of the actual competition. And for the record, it is not really a pit; it’s a bunch of really big, squishy mats, and there are not enough of them in my humble opinion. 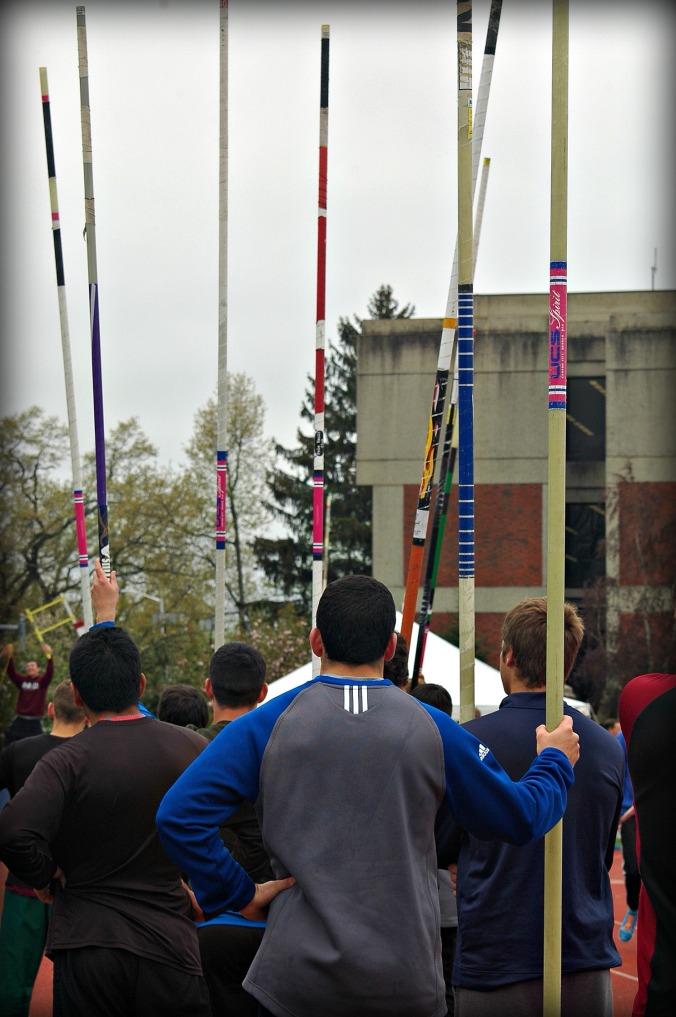 Isaiah had a couple of iffy practice vaults, and took a bad spill off the mats after one of them, injuring his shoulder. The track felt slippery to me (I can’t say whether it was actually slippery, but I did hear some grumbling about it from some of the athletes). And the ballerina in me wanted to put warm clothing on these kids while they stood in the long queue awaiting their turn. Some of Isaiah’s competitors walked in front of me when I was attempting to capture one of his practice vaults, and so I only caught a couple of awkward shots: 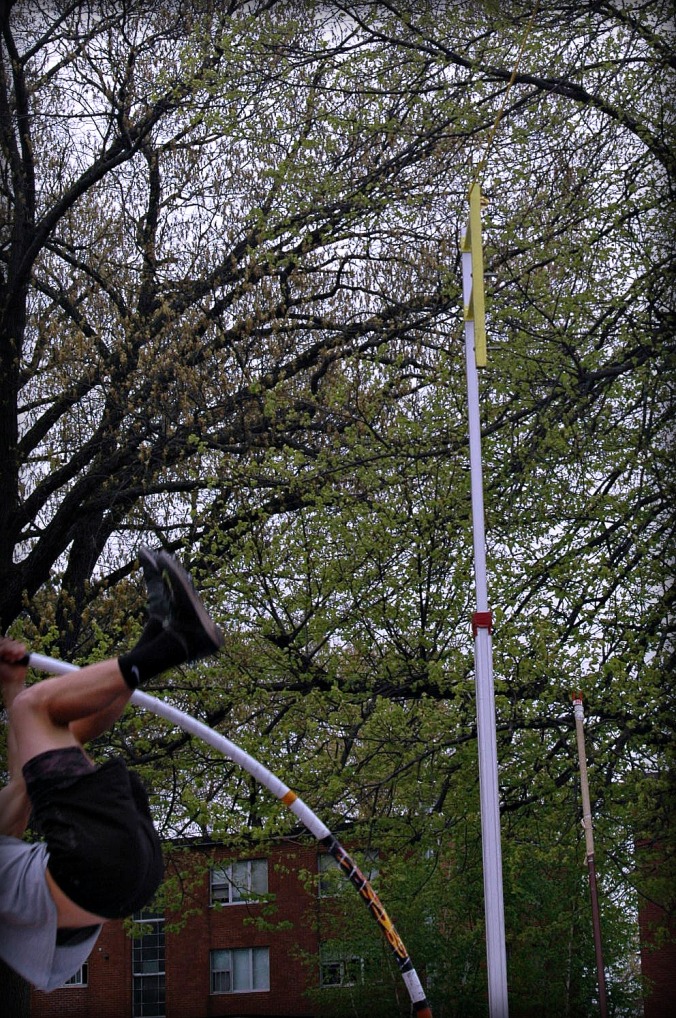 Pole vaulting is nothing if not awkward, though. And it was just one of those kind of days. Kids were falling all over the place—Isaiah was hardly alone.

When I could no longer feel my fingers I finally took my leave of the track meet and headed to the student union across the street for coffee. And as fate would have it, I missed Isaiah’s moment, the one we had been waiting for (not to worry: Coach Chef was there). Turns out on his third and final vault Isaiah not only cleared the horizontal crossbar, but cleared it by a mile, only to inadvertently knock it loose with his foot on his way down. He narrowly missed qualifying for next weekend’s big event.

It was a bitter pill for young Isaiah to swallow. And so it goes—we’ve all been there. It is another little chink of mortar to add to the bricks that compose us and make us interesting, small consolation when we’re in the moment. Chin up, Isaiah, it is but a blip on your timeline. At least, that is what my mom used to tell me when my lower lip was scraping the ground: life goes on and you do your best to make lemonade of lemons.

A long-awaited visit to Berkshire Mountain Bakery finished our Saturday. This interesting little place took the spotlight in one of four episodes in food writer Michael Pollan’s wonderful documentary series called Cooked. I think it is fair to say I am a Michael Pollan afficionado, even if I do not practice his food philosophy completely and earnestly all the time. But I appreciate his comprehensive knowledge of food history and love that his message about healthy eating is rational, never shrill.

The thing to distinguish the bread at this particular bakery is the absence of leavening—baker Richard Bourdon uses fermentation and ancient baking practices to create a product that is ostensibly good for the gut, even for folks with gluten intolerance. (You can watch the series on Netflix, and I enthusiastically recommend it—even if you have no interest in the underlying healthy food ethic, the documentary is thoroughly entertaining, as is Pollan’s narrative.)

Turns out the outlet in Pittsfield, where we had dinner, was just that—an outlet. It was not a bakery as we expected. So the atmosphere left much to be desired. But the product was every bit what we hoped for and more.

We left loaded down with a bunch of bread, thinking we’d make it last. We will not. And so it seems routine visits down to Pittsfield, Massachusetts will be part of our still-evolving landscape.