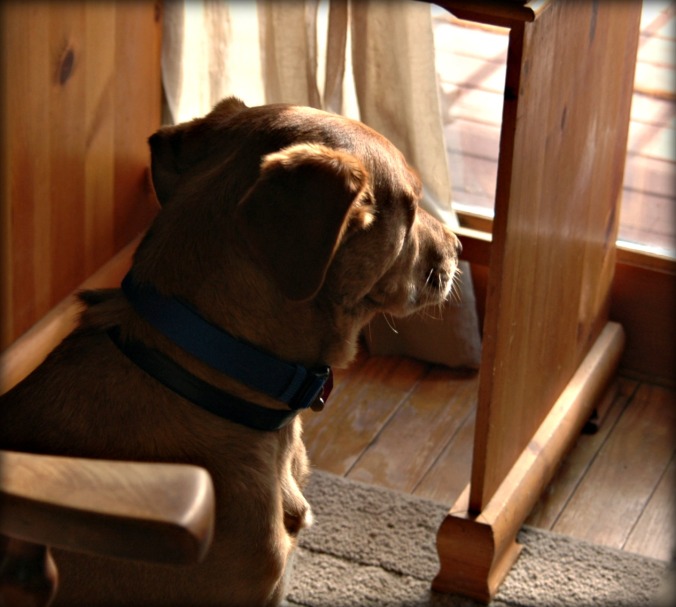 Winter was kind enough last week to gift us its annual January thaw, which means the schmutz on the ground—an unpleasant casserole of crusty, gritty snow with a menacing bottom layer of ice—retreated obediently into atmosphere and earth. We have frost heaves already, a phenomenon more typical in early spring. Extreme cold temperatures arrived in December, followed by thawing, and then more cold, and more thawing. You should see our back yard right now: if you didn’t know better you might suspect a bustling community of Hobbits thrives there, creating urban sprawl in every direction, its massive network of tunnels and trenches stretching into the woods willy-nilly without the slightest regard for a plan. You’ll twist an ankle on the peaks and valleys in the darkness. Hobbits.

But January thaw also means mini mud season and messy dog walking. Friday and Saturday the temperatures plummeted, leaving frozen tundra in their wake—perfect for dog walking, nay, running. Yesterday Scout and I had our first real run, a couple of miles in bracing twenty-something-degree air. I had enough sense to quit before anything was torn, pulled, or otherwise damaged. Scout showed me a glimpse of who he really is, the dog inside him, the dog who yearns to play. In a single comical, cartoon-like moment he sprinted ahead of me on his 20-foot lead with so much zeal he face- and shoulder-planted directly into the frosty ground when he reached the end of it. Not to worry, he said, bouncing up and sprinting back again, play gesturing right and left, running in tight circles around me before we continued on our way.

Naps are important, too.

Home again, Scout retreated to the safety of his quiet demeanor, his Boo Radley-like shy ways, but the jig is up: now I know what’s coming ultimately, and it is joyous.

Yesterday I felt like making soup, inspired by the season. That got me thinking about a particular soup, one that was handed to me in a pickle jar across the threshold of my erstwhile home in Tennessee. The young woman standing there with two little people peeking around from behind her explained it was still warm, but not too hot to handle. She also handed me a loaf of bread.

A few weeks earlier, in the late summer of 2006 but also the official start of fall term at my small ballet school, she’d enrolled her tiny and beautiful six-year-old daughter, who looked for all the world like a ballerina in the make. The child sprouted goosebumps and shivered at the start of her first-ever ballet class; when I later mentioned this to her mom she explained their small apartment was not air-conditioned, so her children were unaccustomed to refrigerated air—this happens all the time, she reassured me.

We chatted for a long while that day, this sinewy, athletic woman narrating her family’s journey to Knoxville, her background in Outward Bound programs, her husband’s postdoctoral fellowship in medical ethics at the University of Tennessee, conceding that they were only passing through ’til he finished. Eventually we would go on to talk about ballet schools in the Pacific Northwest where they expected to land, in case her daughter decided she wanted to continue her ballet classes.

Turns out we were neighbors. They lived in a groovy little mid-century modern apartment complex in the same historic neighborhood where I lived with my family; but whatever charm that building possessed—a building that housed many other families of their ilk—it lacked in amenities. If nothing else, it was most assuredly affordable, and its location was ideal for university folk.

Not only did we live in the same neighborhood, we lived on the same street separated by just three blocks. Hence the front door soup delivery, a gesture of kindness on an afternoon when I cancelled classes because a virus had left me hacking and coughing and without a teaching voice. This is the soup I always make when one of us gets sick, she explained.

Later when I was sharing the story of this woman’s charity with a mutual friend, she opined, Oh, yes: she is wonderful, and she really knows how to stretch a dollar. The memory of that remark has nudged me through the worst of times, evoking a skill my own mom fostered in me during some thin years growing up under her roof.

HCB and I have practiced dollar stretching, doing without extras, making things work these last four years. He put a three-dollar chicken in the oven yesterday morning; some of the meat would go into the soup I planned to make later in the day, the rest into the fridge. The carcass would serve as the foundation for made-from-scratch stock which boiled down on the stove all day yesterday, encouraging a certain dog to wander around with his nose pointed skyward—that, and the tender bits of just-roasted chicken he was hand fed earlier, still hopeful for manna from heaven. (Life is indeed good.)

I know there be chicken.

The stock would become soup together with whole coconut milk, fresh lime juice, red pepper flakes, cilantro, green  onion, and seasoning: precisely the same soup a huge-hearted mother of two handed me on a summer’s day ten years ago in Knoxville, called again into service on a winter’s day in Vermont, and for pennies. Dollar stretched, check. 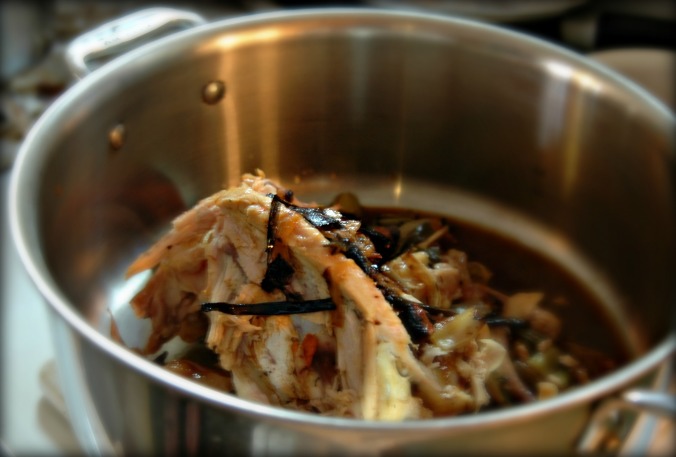 And then there was stock. 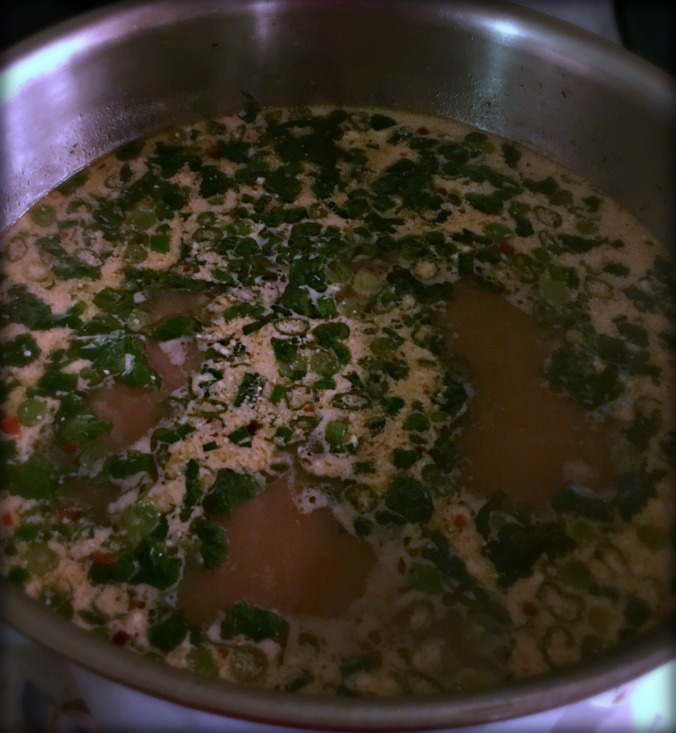 The magical recipe, a blessing in disguise, is scrawled on a small index card in a frugal mom’s hand, held fast to the door of our fridge by magnet, dog-eared and stained. In short, the soup is amazing. Every time I make it I think of that family and I swear I still feel the love. Hope they are doing well, wherever they are.