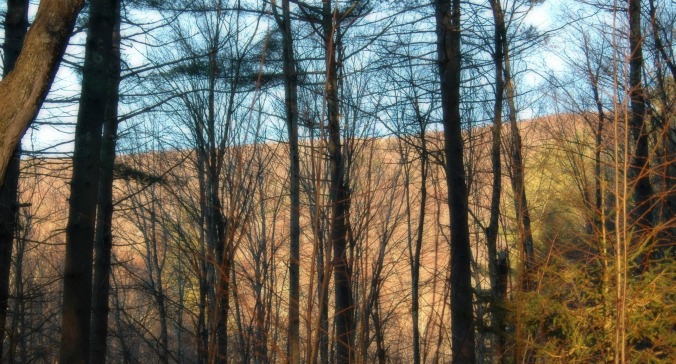 Like so many geographic place names in America, Taconic comes from a Native American word, meaning “in the trees.” I can think of no better moniker for the landscape that greets us each morning, but the daily commute frees one (if only briefly) from the confines of the woods which can at times overwhelm. In those moments the sky opens in the Battenkill Valley, flanked to the west by the Taconic Mountains and to the east by the western escarpment of the Greens, Vermont’s namesake mountains. However distant the Taconics or Green Mountains loom on the horizon along the stretch of Vermont’s Highway 7A between Arlington and Bennington, one can never fully escape that condition: living in the trees. The profound beauty of this landscape will catch in your throat when you first see it, but prolonged immersion in it stokes a hunger for the flat horizon, if only to observe more fully the movement of the earth against the night sky: the filtered view of it up through the trees is only a tease.

The people on our mountain are a mixed lot. Kempt homes, immaculate wood piles, tidy gardens, and even a manicured lawn here and there where the limited sunshine has permitted one to grow and flourish to begin with, live in communion with backcountry landholders who seem not to care, or to worry too much anyway, about graffitied dumpsters and work trucks that should not be here to begin with, mud in lieu of lawn, and cars left to rot in situ, giving one pause to reflect on the oily soup that must surely leech from them into the ground water by way of any number of streams that finally flow into the nearby Battenkill. (I have been told these are the people you want as friends for their willingness to save you from your own stupidity when you put your car into a wintry ditch, or to deal with the rabid raccoon wandering in the woods.) Some of these folk were here first: it is their landscape, now governed by town rules to which the authorities seem content to turn a blind eye. About this time of year neighborhood creeks roar indiscriminately at all hours helping to mute the sound of heavy trucks, but in a few weeks will settle, becoming quieter still with the foliage that now waits with gathering impatience to explode from long-dormant trees and other flora. There is no way to filter the rusted out carnage when you pass through it on the way to your own drive—it is an exercise in gratitude for what you have—but the arrival of spring in earnest will try hard to help.

Our rough gravel mountain road turns to asphalt pavement for a few tenths of a mile before it drops sharply by way of a hairpin turn and finally meets Route 7A. Thence a couple of miles south into town proper, with a parallel railroad to the east and scattered housing, businesses, and the town park to the west: the accidental tourist will be tempted to stop into a likeable and accessible modern sugaring operation with adjoining shop and Norman Rockwell exhibit before venturing on into town.

Although Arlington was once the state capital, nothing much remains to suggest any kind of pomp that may have distinguished it as such, save the land markers on its outskirts. Aside from a few notable historic structures, this miniscule village is like any other in these parts, with two raggedy convenience stores, a smattering of family businesses, a vet and a medical clinic, the requisite town hall, an ancient and a modern church, and more recently an offending small box retailer of the variety one local suggested cries out, We need help here. It is too bad: we are not living in the glory days of this New England village, though there is yet life in it. (A recent infrastructure project missed its mark: opportunities were overlooked, perhaps not enough money in the till.)

A long stretch of lovely rural highway unfolds on the south end of town; heading south you can abandon ship and take a left turn onto Highway 313 to the newer Route 7, which has the feel of Interstate. It lacks the interest and character of the original, older 7A that parallels it a couple of miles to the west, affording a more intimate view of rural life in Vermont, far and above the best commute to Bennington in my opinion. Route 7A winds its way along the valley floor for several miles, hilly and curvaceous here and there, with two stretches in particular where the trees all but close in overhead: it is these two ‘tunnels’ that stubbornly cleave to packed snow and ice after a winter storm a while longer, when the rest of the road is long clean and dry.

Once through this pair of chutes, though, the heavens open again and Vermont country life can be observed as in a fish bowl. In the early morning children of all ages wait for school buses on the sides of the road, many in their own driveways. One ancient and curious barn stands half burnt, its thrifty (or uninsured) owner continuing for years now to use what remains of it, in no apparent hurry to rebuild. Wheat-colored fields, flat and rolling, will soon give way to a verdant carpet of new growth. It is along this stretch and on the approach to the hamlet of Shaftsbury one can see examples of early clapboard farm houses, barns, and other outbuildings, some lovingly cared for through the generations, nudged right up against the road: this mattered less when it carried unmotorized traffic. But when you park on 7A and step out of your car for a moment as I have done on one occasion, the cars ripping past in close proximity will get your attention: this is a fast moving highway in the here and now, however quaint the landscape.

Also on this stretch of road lies the turnoff to one of the best farm stands I’ve had occasion to visit during my tenure as a Vermonter. And just across from the turnoff a pair of cottage businesses and a farmhouse hawking fresh eggs on a sandwich board: $3.50 a dozen during the two-plus years I’ve made this particular commute, a piece of burlap occasionally covering the sign. At the top of the hill beyond it, the cheerful yellow-and-blue cottages of the Serenity Motel cozy up to the Governor’s Rock Motel, its namesake boulder rising from the ground on the edge of the road. A few tenths of a mile further south and this curvilinear road will lengthen straight as a pin on its way into Shaftsbury, losing elevation as it surges past a sizeable cemetery, a forgotten apple orchard, and a handful of quaint structures (one schoolhouse in particular speaks to me), before the highway slows to a crawl through town. Blink and it’s gone, the town Robert Frost surely referred to as the ‘village’ in his 1922 poem, Stopping by Woods on a Snowy Evening. And just beyond town the same poet’s house, standing proud in its dressed stone facade but beleaguered by sparring heirs, it is rumored, still worth a gander if you’ve never been.

You’re almost in the quirky town of Bennington at this point, one of a few in Vermont with any population to it but a victim of the slow economy in recent years and other afflictions seen here and elsewhere, with palpable signs of renewal to be sure. To the east is another chance to pick up Route 7 should you desire, but my journey at this point circumvents the town in the other direction, to the west, by way of back roads—pothole ridden, poorly maintained, but scenic enough. Winding around the pastoral entrance to Bennington College, the daily commute continues across North Bennington Road, picking up the Silk Road and passing through a beloved covered bridge. Middle- and upper middle-income families live here, an elusive population in Vermont: this is a picturesque neighborhood still flanked by the remains of farms. Silk Road eventually bumps into Vail Road to the right, Fairview to the left, but all roads lead to my destination. I veer left, where there is more of interest, in particular the Bennington Monument, a massive monolith towering just outside the car now but visible on the horizon from nearby New York; marking the Revolutionary War battle that was thought to have turned the tide of the war, the monument announces Vermont more impressively by far than placards elsewhere at its borders. At the base are situated large homes, elegant and historic, save one Walloomsac Inn that languishes eerily in its shadow, a bizarre structure that is the subject of rumors and legends.

I venture instead in the opposite direction down a semi-rural road, sparsely populated with appealing homes, finally reaching my destination: a nondescript corrugated metal structure, an unlikely venue for the creativity and industry that blooms in a petri dish behind closed doors at the top of a carpeted stairwell. Not far from civilization, the campus here is always windy (it defies you to breathe in the winter, lovingly caresses you in high summer), home to a small airport and a sizeable wetlands that supports all manner of wildlife—massive snapping turtles, various species of waterfowl, and a healthy deer population all live here. It is a pleasant terminus for a longish commute that is occasionally harrowing, mainly uneventful, and once in a while awe-inspiring: the afternoon sun slipping behind the Taconics sets ablaze the fall foliage on the western slopes of the Greens in colors the likes of which I have seen in no other place I’ve lived.

Twenty miles door to door, about a half hour or so in the car: it is not a bad way to spend a few moments most days. Seems the mountains of my erstwhile home in Appalachia have followed me here: the Vermont landscape connects me unexpectedly to my Tennessee roots via the daily commute.