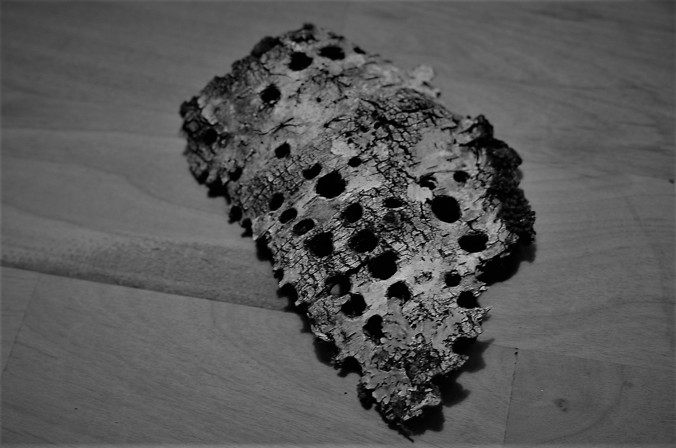 Birds around here fall silent in winter, but this summer and fall the woods around this little cottage have resonated with so much birdsong at times that we’ve raised a fist skyward: trying to sleep, here—can you please keep it down? A parliament of owls lives in our trees. That’s what you call a group of owls—a parliament. The sound of an owl in suburban Knoxville, Tennessee, was rare and enchanting. But in this Vermont forest they awaken a light sleeper in the night, making it difficult sometimes to fall asleep again before the early morning alarm sounds.

On the drive down our steep mountain road one morning last week I disturbed a bunch of crows who were sauntering around in the road like they owned it. You call that a murder of crows. Murder is what I’d like to do to a few owls who are interfering with REM cycles in this house.

I picked up that piece of birch bark out in the yard a few weeks ago because it was so spectacular: somebody was hard at work, for a while. I love how methodical and tidy the holes are, in neat rows evenly spaced. We have woodpeckers here, too—teeny ones and big ones. The maple that smooshed our cars a couple years back held a nest of woodpecker babies deep inside its trunk, who cried and cried when the tree came down. We could hear them, but could not see them. The mama was nearby and distraught. The next day we found a dead baby on the ground by the downed tree, probably abandoned by a critter looking for an easy meal who perhaps though better of it for some reason. Or maybe bald baby woodpeckers are an acquired taste. Nature sure can be cruel.

Meanwhile my own baby—my twenty-something manchild—arrived on my doorstep somewhat unexpectedly last Tuesday. He’s hanging out with us for a while, helping us pack, perhaps helping us move, too. We’ll see. House closing day is only a week and a half away, and then the big work begins. It’s an exciting and terrifying time for us. For my part, I’m thinking about 1936, the year the house we’re buying was built. Those were tough times, but the worst of the Great Depression was over and the American economy was beginning to recover: the ‘waste not, want not’ values of my grandparents—and of so many others of their generation—resonate with me even now.

Who built our house? Who bought it? Was it a family? Did they have a dog? Had they suffered through hard times? How did they make ends meet? I know only that somebody thought to conceal a cutting board under the kitchen counter—it slides out and shows beautiful signs of many years of use. And close to that is a drawer made just for bread, with a sliding metal lid that’s perforated in an artful starburst pattern. Once upon a time I think we cared a tad more about aesthetics in ordinary objects, like bread boxes. And street lamps, and toasters, and bridges. I think all of that matters. And I love that the people who re-made our house with modern comforts and conveniences saw fit to keep some of the things that matter.

The bird or birds who made the holes in the found birch bark were probably more concerned with finding their next meal than with art. But there is most definitely art in their industry. The twenty-something helped me puzzle through a problem with my Nikon, and made a few pictures of his own. I like this one he shot, in full color: to me it shows a perfect, tiny landscape and tells the story of so much that happened to this tree, which surely provided shelter to more than a single family in its history. Soon we’ll start making our own thumbprint on the new-old house, putting our own holes in the walls, if you will. Metaphorically speaking, of course.