Mulch, gentle reader, covers a multitude of sins. I know how to spread mulch: I am good at spreading mulch. David-the-Chef wants to know why on earth we should have a load of mulch delivered. I ask you, Does this question even merit an answer? Isn’t it OBVIOUS? Mulch gussies up everything it touches: it is like—you know, Mr. Pastry Chef—icing on the proverbial cake. I say, Let there be mulch.

As skilled as I am at spreading mulch, I am equally horrid at gardening. I can’t even be trusted to take care of things growing in pots. Back when I was director at Knoxville Ballet School my beloved students and their parents often gave me beautiful potted plants as teacher gifts. One optimistic person even gave me a lemon tree, of all things. These thoughtful, organic gifts often came in fancy glazed pots, festooned with ribbons and handwritten notes—I’ve kept pretty much every single note or drawing a ballet student ever gave me.

The plants, though? I always said thank you to the giver, and then turned around and whispered to the plant: you are beautiful, but sadly, you will be dead within two weeks’ time, dear plant. I am so sorry. 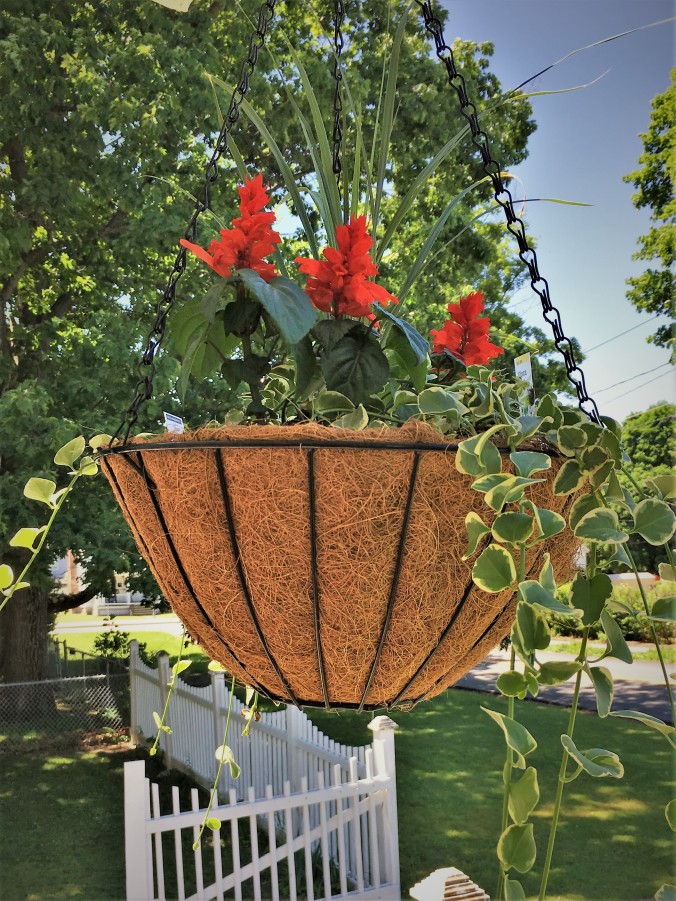 I am not so much a gardening enthusiast as I am enthusiastic about gardens. I am willing to give it another go. One day after work last week I made two identical baskets now hanging from the porch trim on the front of the house. I put something called salvia in them, a plant I chose for its showy crimson color, and I added some other cascading stuff whose name I’ve already forgotten. And then there is this spike-y grass sticking straight up in the middle of each basket. It is a good thing they are hanging baskets, because if you looked into them from above you would see the work of a kindergartner, or perhaps a deranged person. I lack patience and I know it: call it a character flaw. I was tired and just wanted it done. But they’re okay, I guess. They dress up the front porch and make it look like we care, which we do. I had only a single requirement for these baskets: I did not want the cheap plastic kind. These were in fact cheap, but they are metal with those disposable liners made of coconut coir (which is also fun to say, so double points). Et voilà, ’tis done.

Meanwhile, in the back yard, David-the-Chef did this today:

That’s right: it is a vegetable garden in the make, with a few herbs we grew inside during the winter. Today David also put in a couple rows of beans, and sprinkled some more herb seeds in case the transplanted herbs don’t make it. The Chef is a far better gardener than I, most likely because of the one thing he possesses in spades: patience. And that word is one reason I refused to buy plants at a store around the corner from us: the word impatiens was consistently misspelled impatients. And I have no patience for that. But I digress.

We’re still living frugally these days, and the Chef in particular practices his ethos of frugality in a way one must applaud. In lieu of forking over cash for a store-bought border—a thing I insisted would give Scout-the-Labish a visual cue for where NOT to poop—David made do with found objects. The brick border he turned up when he was preparing the soil, castoffs from god-knows-what in the past. Ditto the interesting, mismatched paving stones. I shall take credit for the idea of arranging the bricks in a pointy diagonal configuration, although David did the actual work. And can you guess where we got the wood timbers?

I shall give you a clue from way back in the winter:

That’s right: it was an old, beaten-up playset that David disemboweled earlier in the spring. He gifted the slide to somebody who wanted it for their grandkids, and the rest he piled behind the barn, repurposed now as our garden border. That is one clever and resourceful chef.

He also unearthed the crazy little doggie pilot yard sculpture we had in our teeny veggie garden at the mountain cottage. And today he showed me the thing is made to move in the wind: when the biplane’s prop turns the doggie waves and moves around. Except he does not at the moment, because rust. It’s an easy fix that involves a squirt or two of oil. I just love this doggie.

Meanwhile, we’re trying to figure out what’s what in the existing beds around our house. Last fall when we were shown the house it was clear somebody had dressed up the beds as part of the so-called ‘staging’ everybody does these days. And now that spring has arrived in earnest, we need to know what plants are weeds and what we should carefully preserve. Thus far we have identified hosta, both the plain and variegated types:

And there are bleeding hearts all over the place, which I adore. Last weekend when I was sitting outside talking on the phone to my ex-sister-in-law-but-still-my-sister, a tiny hummingbird came right up to one of the blooms and lingered there for a bit before it left me. I did not have a camera at that moment, but here is a photo I snapped earlier today of the plant at least: 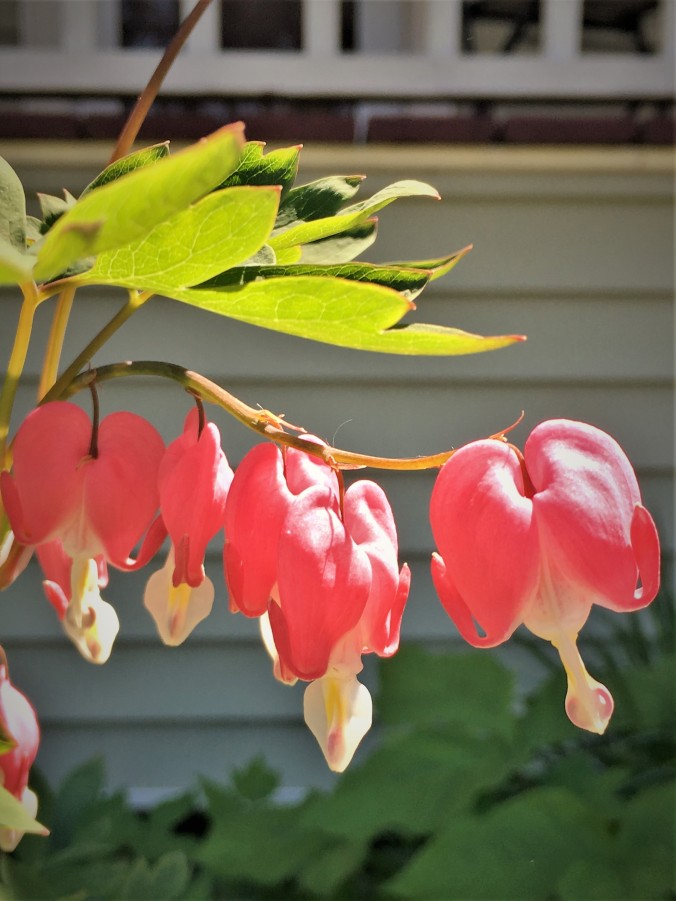 Is there anything more magical than a bleeding heart?

Then there are some plants that look like somebody put them there on purpose, but we’re not sure what they are. This one looks like some kind of succulent:

And this one has a beautiful color and dramatic thingummies coming out of it: 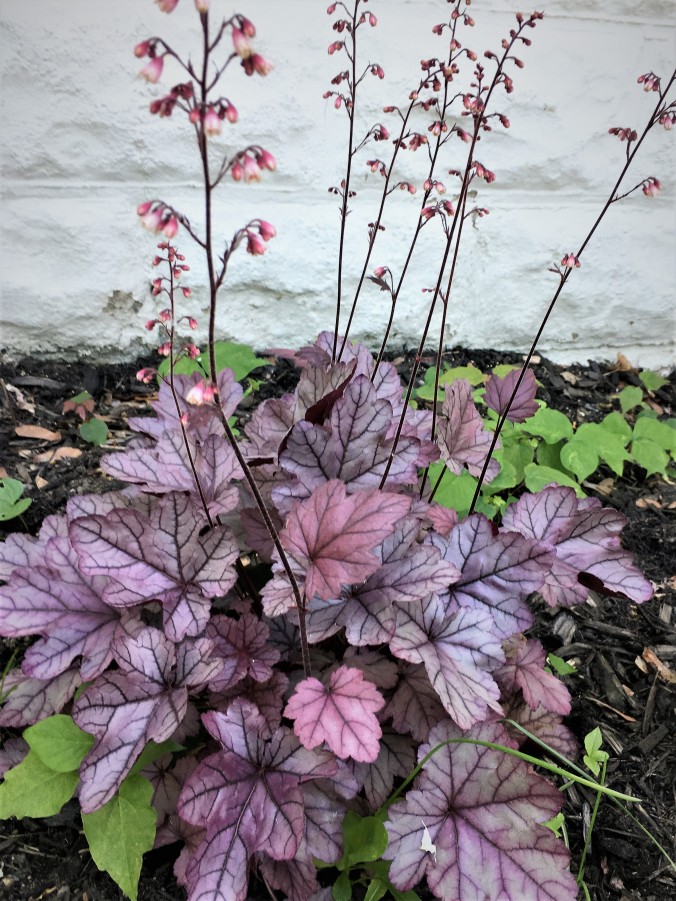 We’re glad somebody thought to add a few perennials to our existing beds. There were also tulips this year, but somebody ate (or decapitated) all the flowers. Weird. And then David planted a bunch of sunflower seeds in front of our charming white picket fence, but the dang chipmunks feasted on them—even the ones that managed to sprout tender green shoots. We’re not sure how it’s possible to achieve sunflower success in the presence of rodents.

But yesterday at the grocery store I found these:

Sunflowers, check. And these snapdragons for the kitchen table: 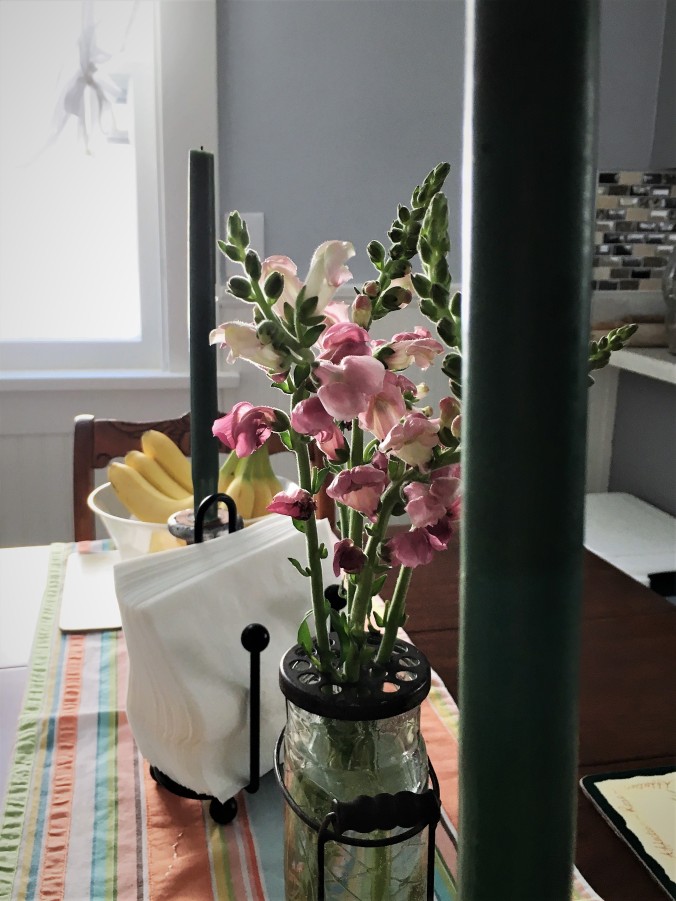 And these whatchamacallits for the chest of drawers in our bedroom:

This August will mark my sixth year in Vermont. When I first arrived I was scared down to my socks, and teetering perilously close to complete financial ruination. At the time the metaphor I routinely used to describe the way I felt was falling into a deep, dark hole, saved only by a pair of fingers clinging tenaciously to its edge.

In the intervening years I’ve managed to haul myself up out of the hole a body part at a time: hands, elbows, one knee up, a leg and a foot, and finally the rest of me, sitting now on my arse with my feet still dangling over the side. There’s still so much work to do, but the last three years in particular I’ve viewed as reclaiming the beautiful life I love, at least some of it, a piece at a time.

Now there is a house, and flower beds, and with any luck vegetables will be growing in our own soil later this summer. And there are cut flowers inside the house again.

And soon…soon there will be mulch.

One thought on “Gardening Story: True Confessions of a Mulching Enthusiast”