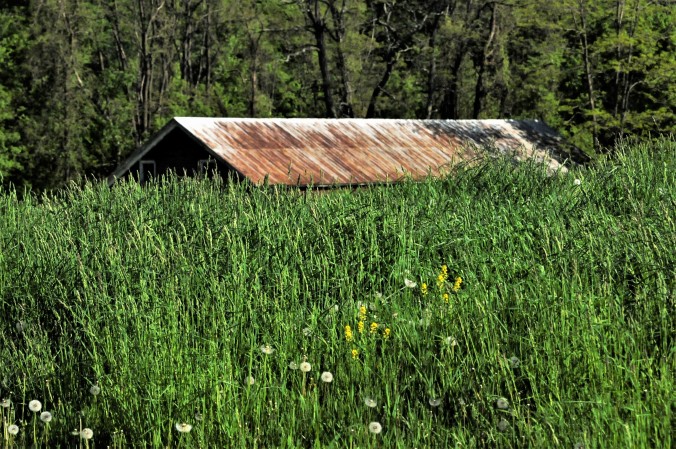 Scarcely a ten-minute car ride from the bustle of our neighborhood lies one of southwestern Vermont’s best kept secrets, the Mile-Around Woods. It is a vast property once held by private landowners but now preserved by a conservation group and open to the public. Altogether, Mile-Around consists of a circular carriage road dating to the late nineteenth century, a network of trails through a dense wood, and adjoining agricultural fields that were part of a working dairy farm until the early 1900s, still maintained in crop rotation by a family of dairy farmers today, goes the story on the web. The fields and trails are available for creatures of human and canine persuasion to enjoy, as I do with Scout-the-Labish as many times as a work week and the weather permit.

Last week was special: I decided to let Scout hike off-leash with me. I had the same sensation as I did in about the third or so year with my beloved shepherd Clarence-the-Canine, an inkling the dog could be trusted. An encounter with two friendly dogs at Mile-Around last Monday made me want to try. Can you let him off leash? asked one of the two people met. I decided it was as good a time as any. After an enthusiastic play session with two new friends, we continued on our way without the constraints of the long tether.

Three times last week Scout and I hit the trail at Mile-Around, for a long romp through meadow and wood, an exercise we’ll continue into the early part of summer. I suspect the bugs may drive us away eventually; the black flies are out en masse already, and yesterday the first deer fly of the season buzzed us on a morning run. Hardly seems fair that a landscape so cruel along about February should also yield so many bothersome miscreants when winter finally looses its grip. But I digress. 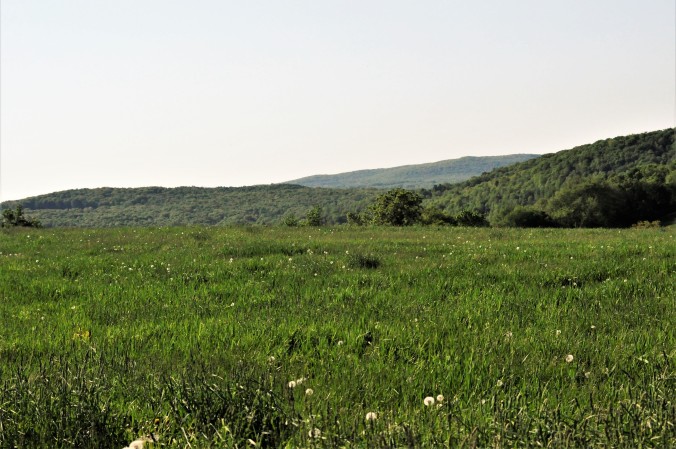 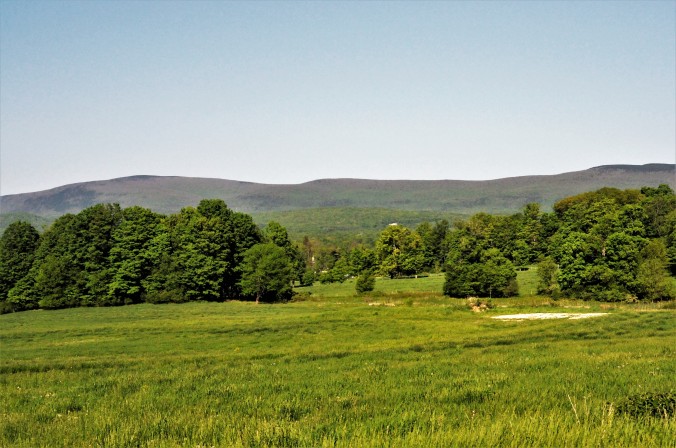 The long farm road we follow on foot into Mile-Around (one of two possible roads) leads up a gentle incline, thence to the first in a series of meadows. A vulnerable outcropping of slate is bare-naked at the top of the hill, with characteristic flakey bits and pieces in earthy grays, greens, and browns; for some reason your feet simply must tread on it, even though there are plenty of places to sidestep it. Intoxicating smells and vexing creatures in the woods to the left are enough to drive a smallish dog mad, held back as he is by a thicket of honeysuckle abuzz with a symphony of bees just now.

I love the way each meadow unfolds through a keyhole-like opening in the vegetation, which all week last week was painted the distinctive, vibrant green of spring, greener still as viewed against a cloudless azure sky. The second meadow is intimate and shadowy, the third vast and sweeping, with billowy waves in the tall grasses growing there. Late day sunshine is exquisite in this setting, otherworldly on the edge of the western tree line where it filters diffuse through the foliage as it reaches for the ground in hazy fingers.

Here the trail arcs around from west to east, and then turns north towards the wood; a rustic bench marks the entrance and invites the weary traveler to sit a spell. It is an image I could not capture because I still need lessons for shooting in darkness with the Nikon D300s. And anyway, there is no resting when Things in the woods beckon. Suffice it to say we expected Gandalf to step across our paths at any moment in this Middle Earth-like setting, or for one of the ancient trees that close in overhead to swoop down and carry us along in their limbs. 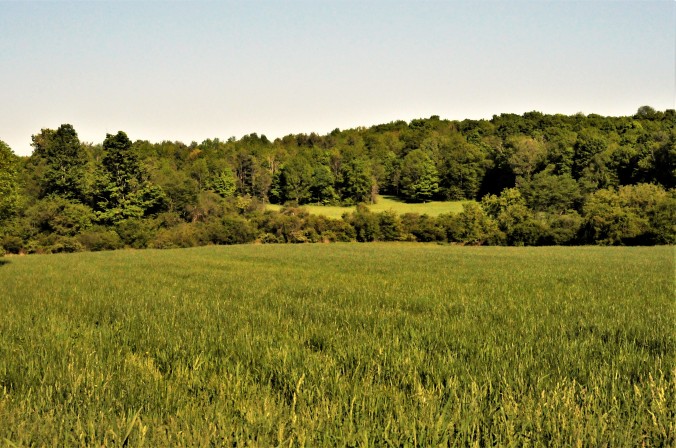 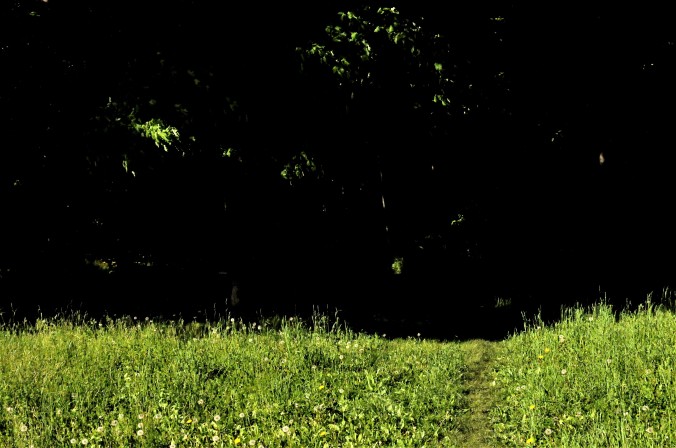 The traveler can linger in this forest primeval on a circuitous path, or take a shortcut through it, but once out has choices to make. Ours is typically heading west down a farm road to the one where we began, that leads back out to the street and our car. But not before examining, once more, the remains of a barn that came down just a tad over a year or so ago, surely part of the early dairy operation. Every time we see it looming on the hill above us I think of the tragic Edward Rochester as portrayed by Orson Welles, in the rubble of his burned out mansion near the end of Jane Eyre. 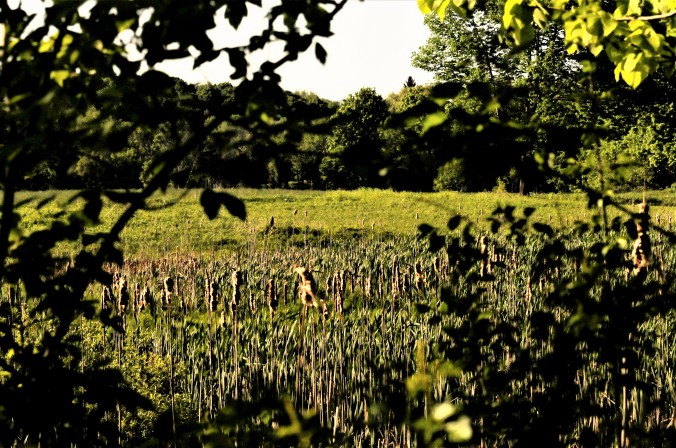 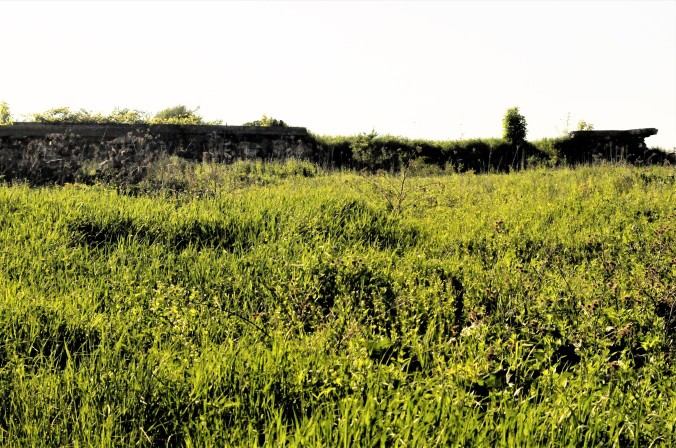 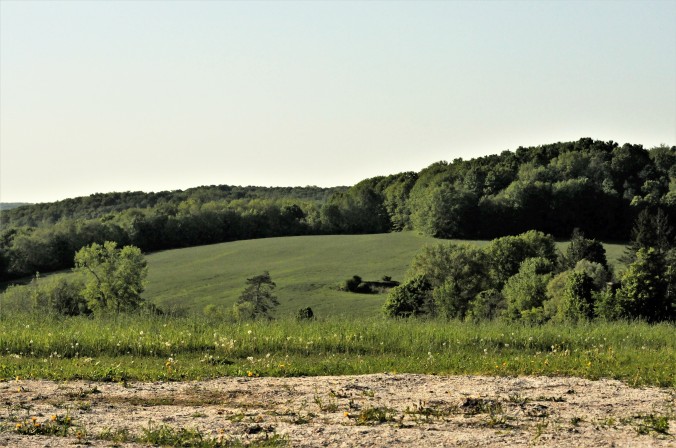 But last week one could hear no deranged wailing nor gnashing of teeth, and the only fire we saw was glowing in the firmament on the western horizon. The days are so deliciously long here in the summer. And in spite of enjoying this new chapter of life in a decidedly urban setting, I still love that wide-open spaces—where the only sounds you hear are the bugs, and the creatures, and foliage in the wind, your dog’s heavy panting, and maybe your own heart beating—are just within reach.