Yesterday was damn near perfect, bumper to bumper. It was also the first day I could feel winter finally, if a tad reluctantly, begin to loose its grip up here in these New England parts. After the Chef and I finished a little morning puttering, and after each of us—and Scoutie—had nice city runs in the glorious sunshine, we cleaned up and headed a few short miles south to Williamstown, Mass, for an afternoon visit to the Clark Art Institute.

The Chef is full of surprises. No sooner had we stepped inside the first gallery than he announced his maternal grandmother had been director of a rawther important collection of George Inness, Jr. paintings in Tarpon Springs, Florida. I like these details from two of the George Inness, Sr. works at the Clark. 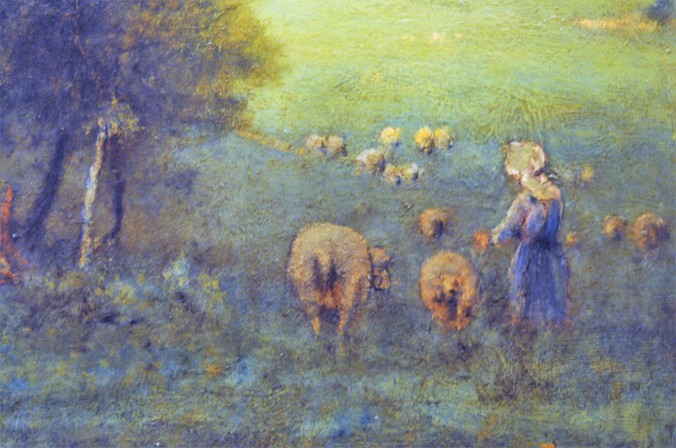 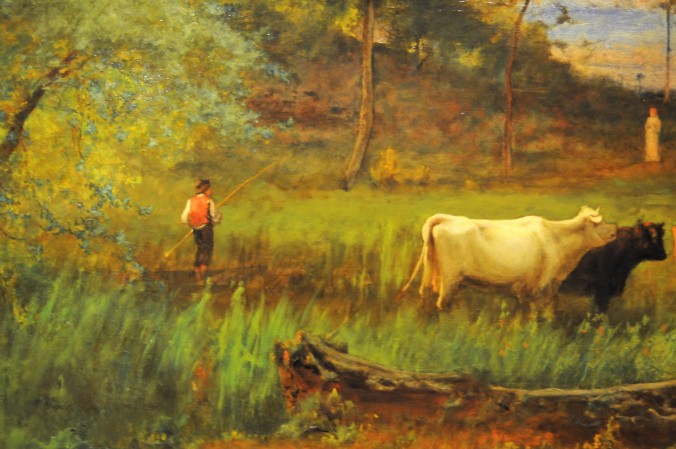 This was also my first time to stand in the same space with original works of the Impressionists, including Pierre-Auguste Renoir, Claude Monet, Mary Cassatt, and Camille Pissarro. 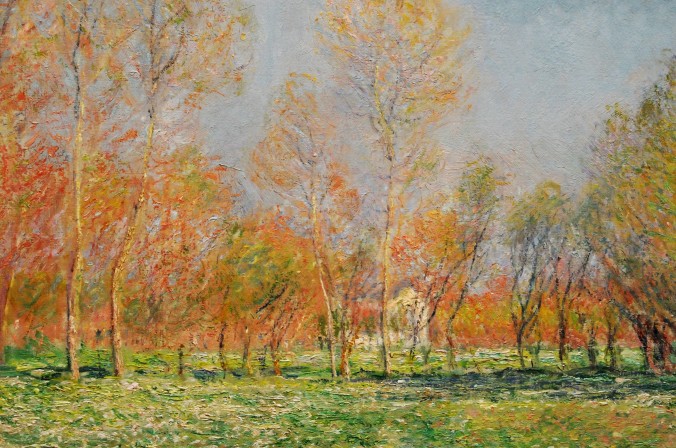 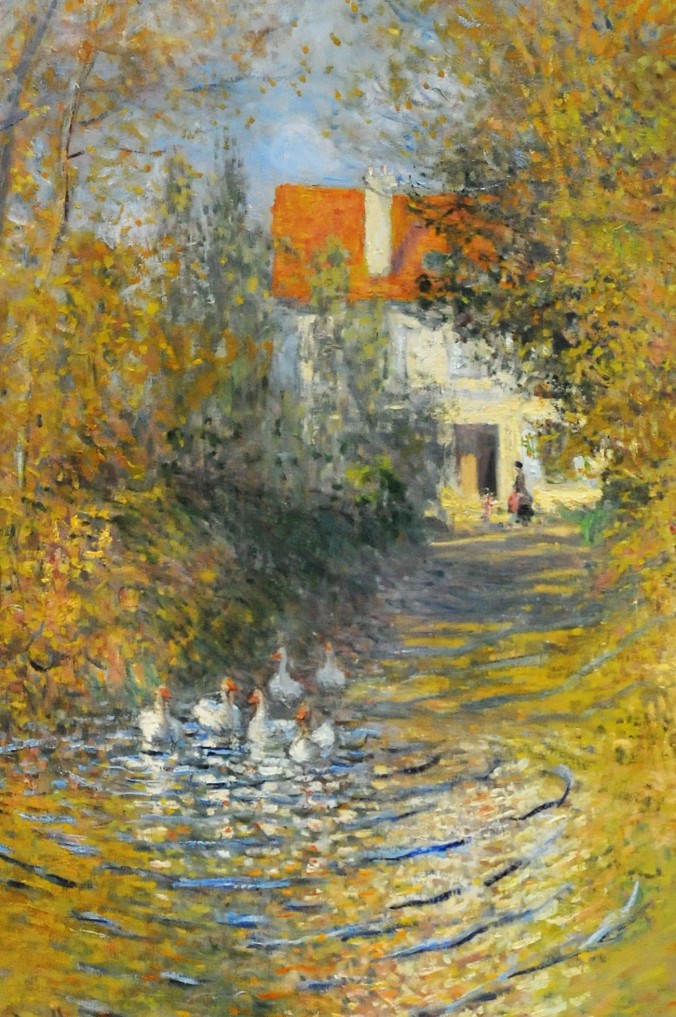 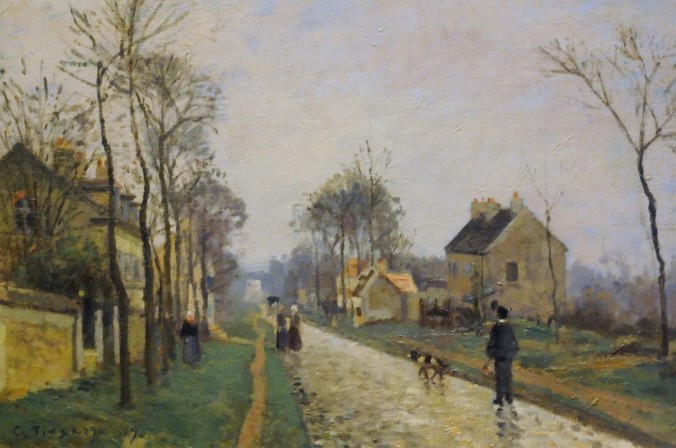 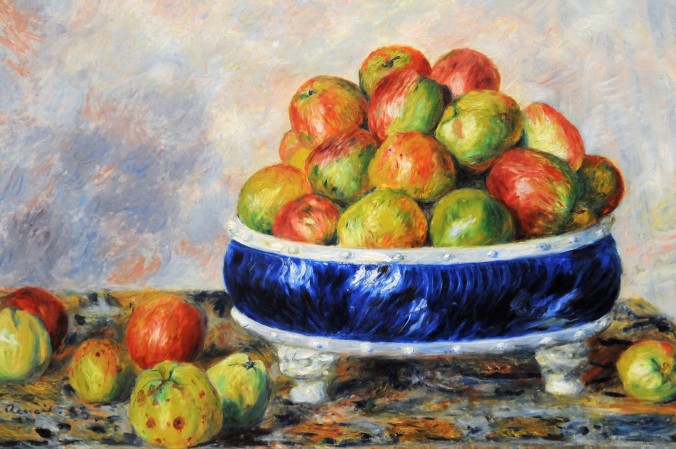 The Chef loved the Renoir food-themed artwork and made several profound observations, including one about the artist’s self portrait above: Just goes to show you, he quipped, it’s possible to be a great painter and have both your ears. We agreed the Clark needs the Chef as a docent.

I love this painting by Léon Bonnat.

I noticed the guitar (or other stringed instrument) is a recurring theme in some of the works by Spanish painters. 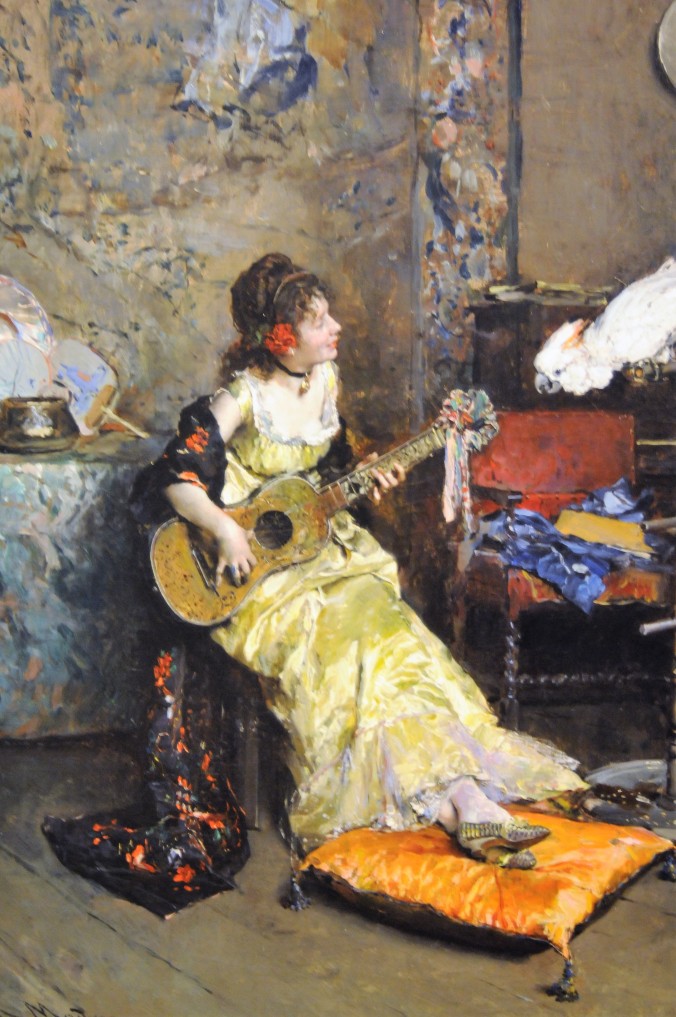 Also, I discovered I’m drawn to sculpture, and the Clark has a number of exquisite examples.

But none more exquisite than this one:

I don’t know who modeled for Degas in this series of four small sculptures, but I’m struck by the lack of refinement in this particular dancer or dancers:

Classical ballet has come a long, long way in the last century. 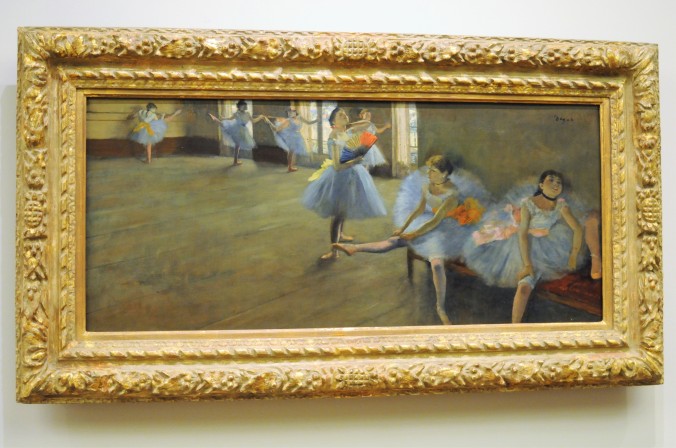 The Clark also has awe-inspiring collections of other objects, including European, English, and American furniture and silver.

This is a young lady’s handbag, similar to one a woman is clutching in a nearby portrait. 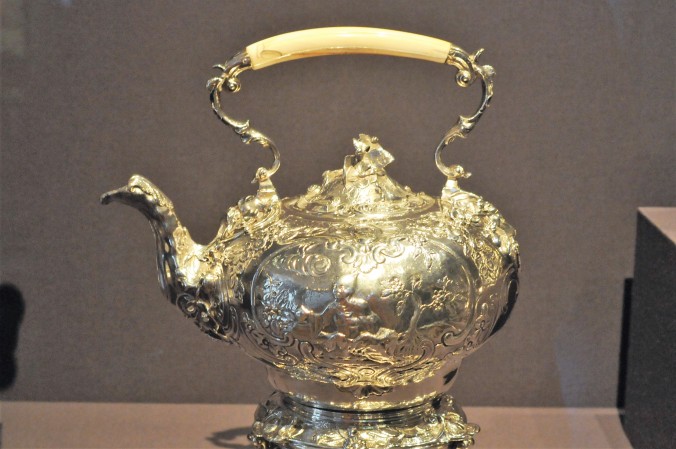 Just think of it: endless opportunities for polishing silver! Meanwhile, the Chef was enamored of these blown glass rolling pins in the Lauzon gallery: 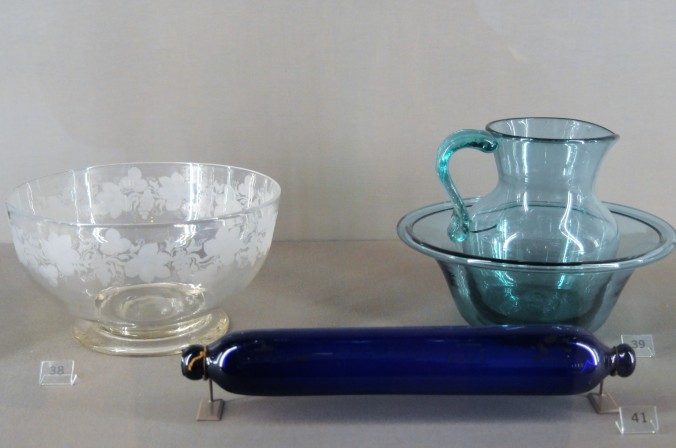 I noticed two themes emerge ever stronger in artwork the further back in time it was painted: first, the Hobbesian characterization of life as “…nasty, brutish, and short,” and second, a much more immediate connection to God. 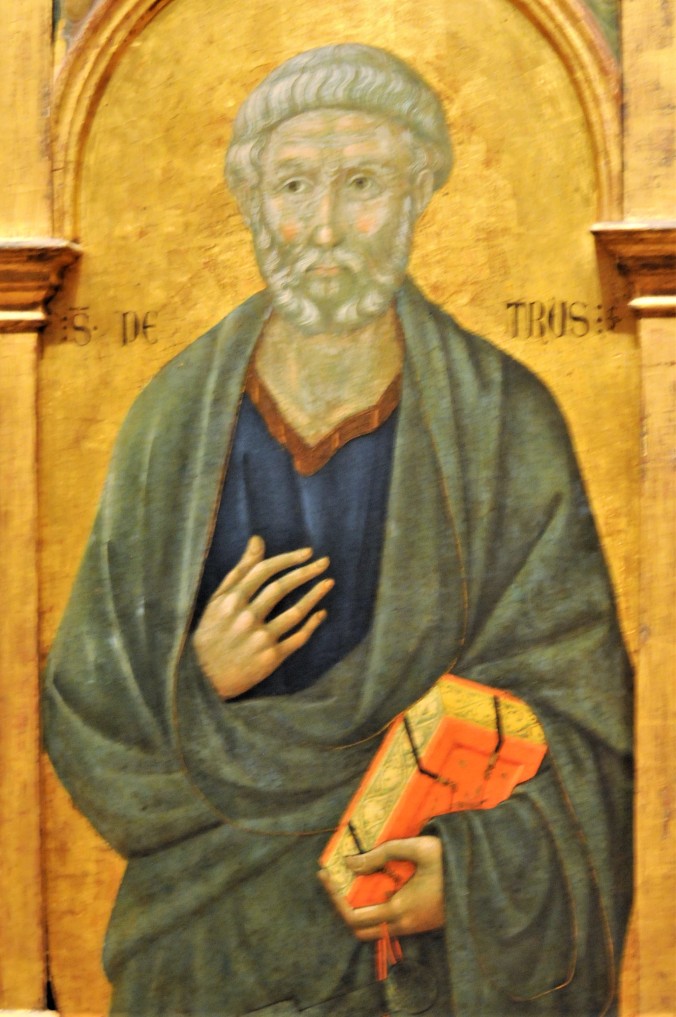 Peter, shown here, is the patron saint of the church I attend, St. Peter’s Episcopal Church. I love how our priest has characterized Peter on more than one occasion as a ‘blockhead,’ albeit a lovable one. It’s all I could think of looking at this exquisite painting yesterday: Peter-the-Blockhead.

As enriching as the artwork on exhibit at the Clark is the museum itself. I’m a sucker for thoughtful design in the built environment, and the Clark has it in spades. I also love the purposeful placement of windows to frame the landscape outdoors. 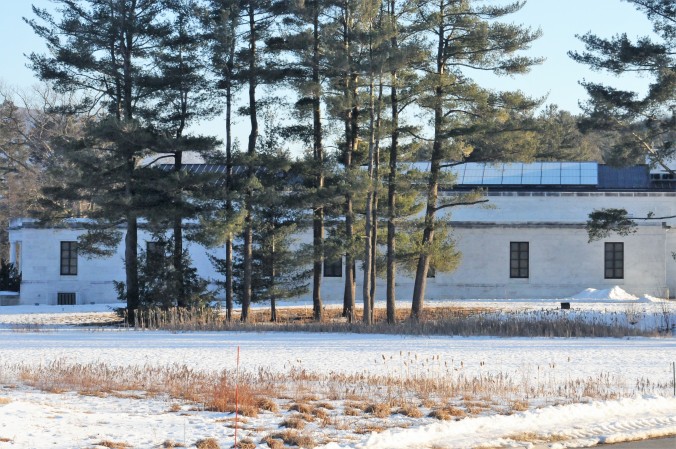 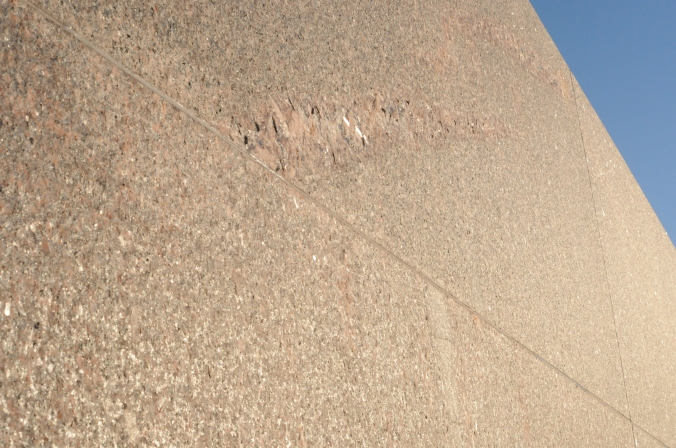 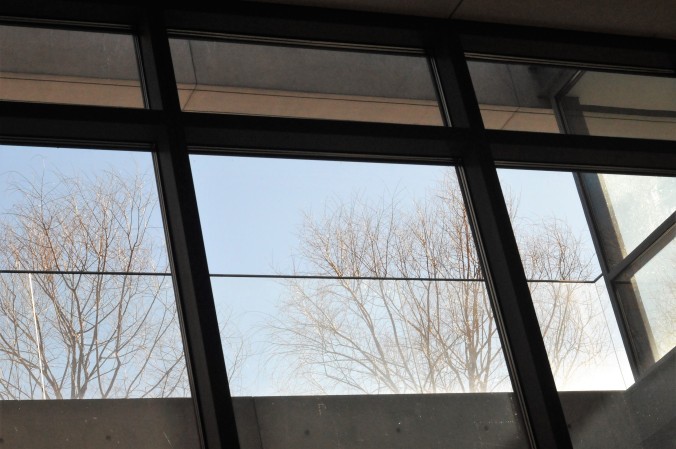 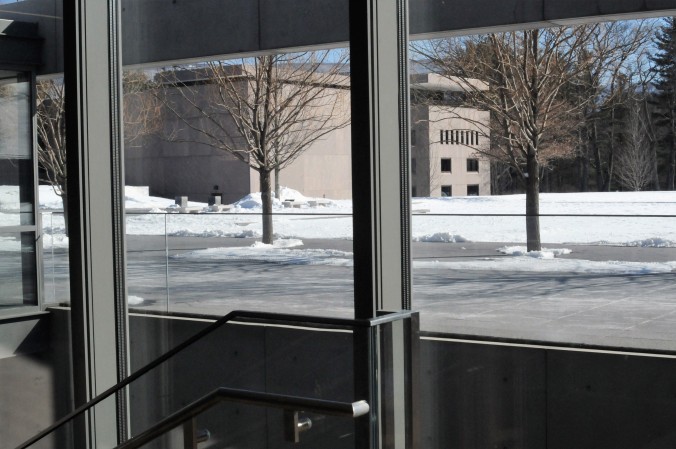 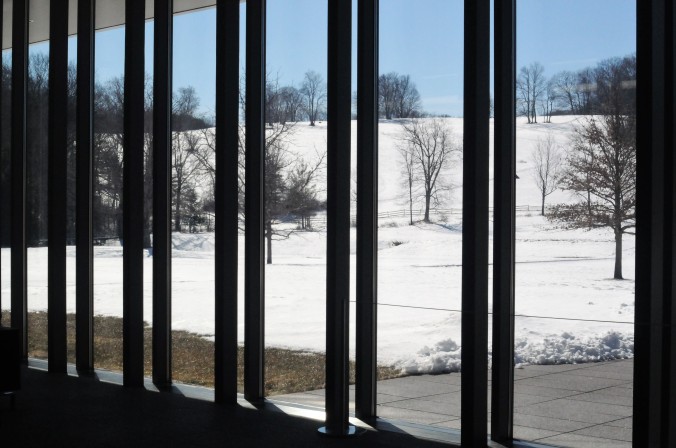 And yesterday the landscape around the museum was as enchanting, with abundant sunshine, as the weather folk like to say, and not a cloud in the sky.

We finished our day yesterday cooking side by side in our cozy kitchen, a thing we do rarely, but it’s always fun. We made pot-au-feu, a wonderfully nourishing collection of boiled root vegetables, with top sirloin and horseradish whipped potatoes. 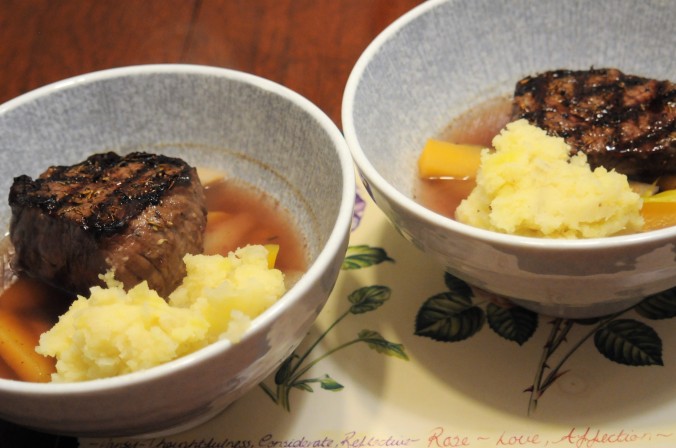 Farewell to winter, and to the Clark, until we meet again.

2 thoughts on “Sunday Photo Essay: An Afternoon at the Clark”