And the photographic evidence is right up ^ there.

Last Saturday morning Scoutie and I struck out on our usual city run, which takes us down a couple of tree-line pathways that wind along the Walloomsac River in a sort of parklike setting—same river in fact that delineates the southern boundary of our property—before we abandon it and change direction. It was early enough that our town was mainly quiet, and in the stillness I swear I heard a familiar sound, somewhere between this:

The wheels started turning in my noggin: Could it be that Vermont has…cicadas?

After we came home and cooled down a little, I did a quick bit of research and in short order discovered Vermont has no fewer than five types of cicadas! And three of the five also live in Tennessee—I can’t tell you how happy this makes me. And why on earth haven’t I heard these creatures before? Was I simply not listening? Maybe I’ve spent too much time pining for the song of the cicada I left behind to be able to hear it right in my own back yard—kind of an audio version of not seeing the forest for the dang trees.

And that cicada larvae casing in the banner photo up there—I actually found it right in my own back yard, on the side of our barn. Thrilling! In case you feel like geeking out on cicadas as I did, you can see which varieties live in your area at a website called Cicada Mania (yes, really: just follow the link if you don’t believe me). Gentle reader, it is almost as exciting as Mullets Galore, which is sadly gone now. (I also saw a mullet at the grocery store yesterday, and I don’t mean the fish variety, but that is a story for another day.) 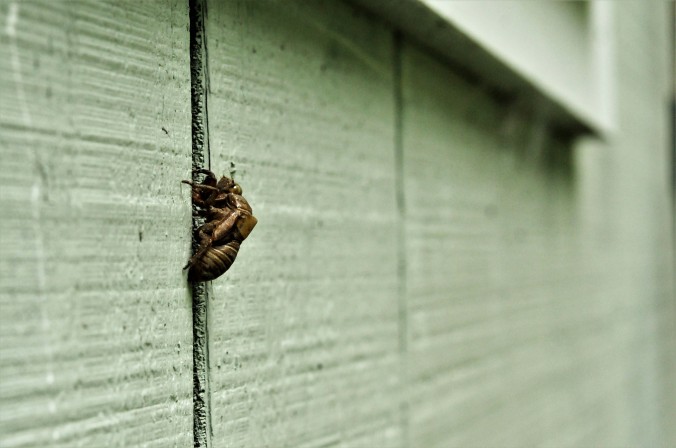 Chef David wondered aloud whether I wasn’t confused and maybe hearing crickets instead. I’m the first to admit The Chef is a dang-near perfect boyfriend. But crickets? I believe I have uncovered a genuine character flaw. I will give him this: The Vermont cicada song is understated, as compared with the Tennessee cicada song, which is more like a roar—like being whapped in the head with a two-by-four. New Englanders are known for their reserve, bless their hearts; I s’pose it’s only fitting for New England insects to be tad reserved, too. I have taught The Chef how to say ‘pecan’ and ‘pie’ properly, so I’m sure he can master my ‘cicadas versus crickets’ lesson in due course.

Elsewhere around the homestead, we’ve been drumming our fingers, waiting for Actual Vegetables from our garden, and for tomatoes that are something besides tiny and green and firm. Finally, finally, our crops are coming in and ripening, and not a moment too soon: there’s a chill in the air in the mornings and evenings that reminds us first frost isn’t too, too far off. We have loads of tomatoes on the healthy bunches in our galvanized tubs up on the deck, plenty of new blooms, and we hope most of them will ripen in time for us to enjoy them. If not, we’ll do as we did last summer and harvest what’s there and leave them in the windows; that strategy seemed to work fine. And as you can see, we still have an embarrassment of fresh herbs. 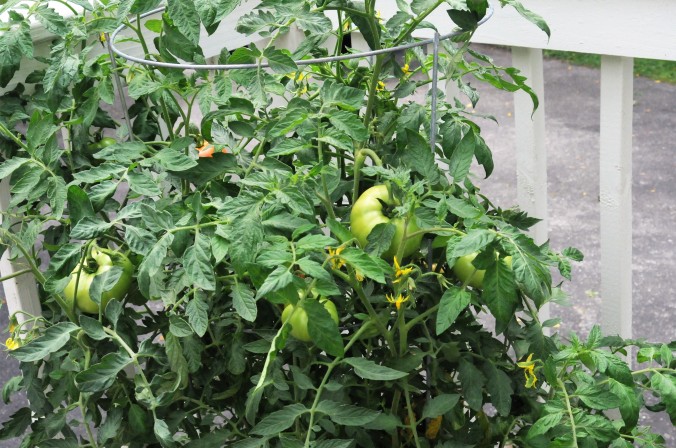 Over in the garden by the barn, we’ve enjoyed several lettuce harvests, and lots of yummy Swiss chard (Chef David grilled some on our new gas grill last night), but the green leafy stuff is about done now. Looks like we’ll have some yellow squash and zucchini; our cucumbers started and gave us a couple of immature and fairly useless specimens, but now seem to have given up. They clearly want something the soil isn’t giving them. Our radishes failed completely—they gave us beautiful foliage and thick, red, radish-smelling roots, and that’s all. We hear radishes like to be planted sooner than we put ours in the ground. Our beans gave us a pitiful yield—enough for a couple of dinners, and that’s about it. But our wildflowers are lovely. So next summer maybe we’ll do only a cutting flower garden in that area, and stick to containers for the things we know will grow well. One thing to crow about: all our herbs and vegetables were started from seed this year. And for us, that is something. 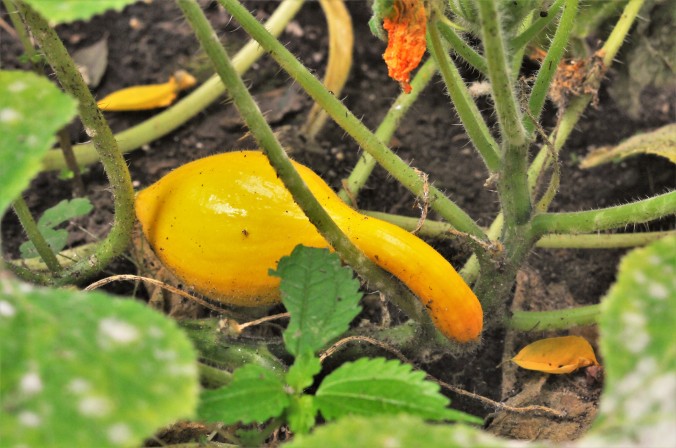 The Chef has been busy this weekend on the final section of fencing to replace, and once that’s complete, our entire yard will be fully fenced with brand new, or existing-but-sturdy wood fencing. This last little bit is in a section of the yard that’s invisible to all except the abutting property. It’s also completely rotted, in the worst shape of any sections we’ve replaced. The last big wind that came through in a spring storm ripped one panel away from a post, and Chef David propped it back up and tied it to the post as a temporary measure. But by the end of this long weekend, it will be almost finished, with fresh, new posts and fence sections installed, and as you can see below, he made excellent progress today. 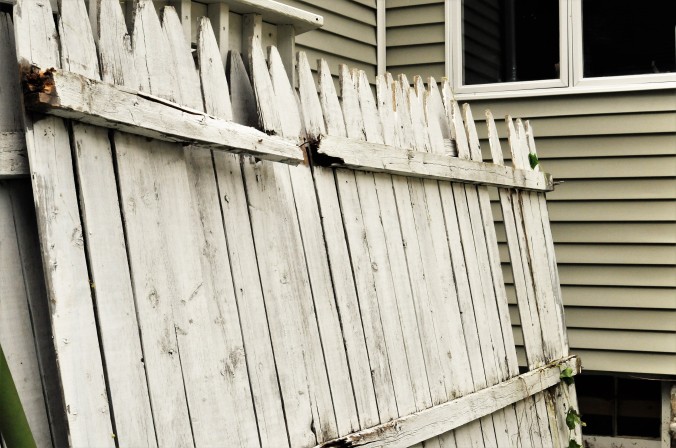 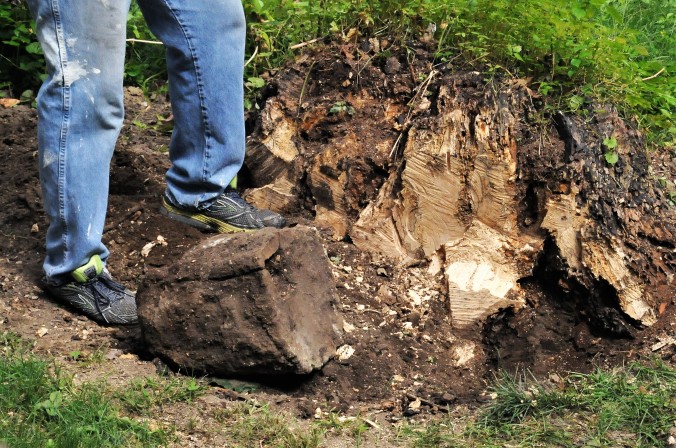 I caught The Chef mid-swing, going at this stump with his ax; this section has been challenging in ways the other sections have not 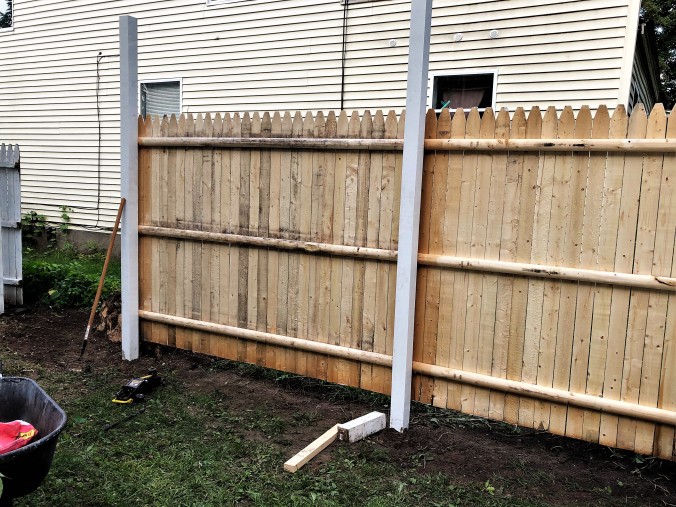 and ta-dah! (bothersome stump at the left near the propped-up rake)

In the process of working on the fence, we were able to take a closer look at the back of our garage, also invisible to us until now, as it sits on the property line. Some of the siding on it has peeled away (probably more wind damage), and the two windows were in pretty awful shape. It’s another example of the corners that were cut when this house was flipped. Small potatoes, we decided. The Chef painted one window today and part of the other, and even though the wood’s not in the best shape, they look much better now. 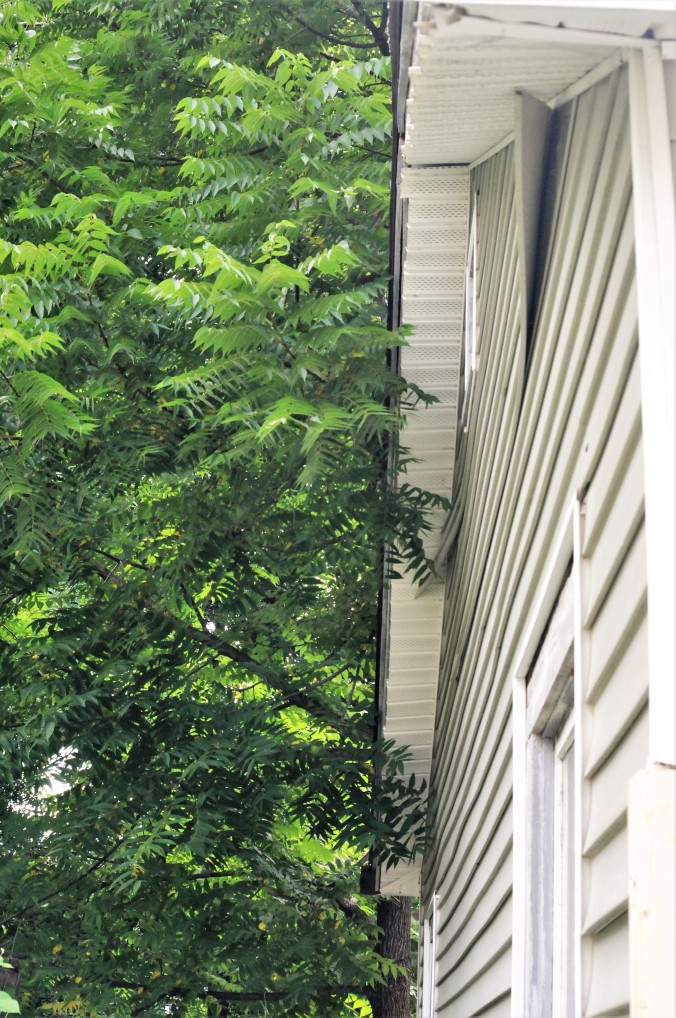 The long, new fencerow across the back part of our yard is also finished now, with a new gate attached where it ties into the barn, giving us access to the river when we need it (mainly to pitch branches and leaves onto its bank, that kind of thing). And I love how The Chef cleverly made an allowance for a tree that’s grown all bockety over the years on the other end of it.

You can see we still need to paint it and add the shiny copper caps to the posts. We chose a style similar to the fencing across the front of our property, lower and with wider spaces between the individual pickets. Mainly we wanted a doggy barrier, to keep a certain curious, water-loving Goldapeake Retriever from investigating during times when the river flows in angry and deadly torrents, during spring thaw, or after heavy rain. So we can still enjoy the beauty of the river, but more safely now. 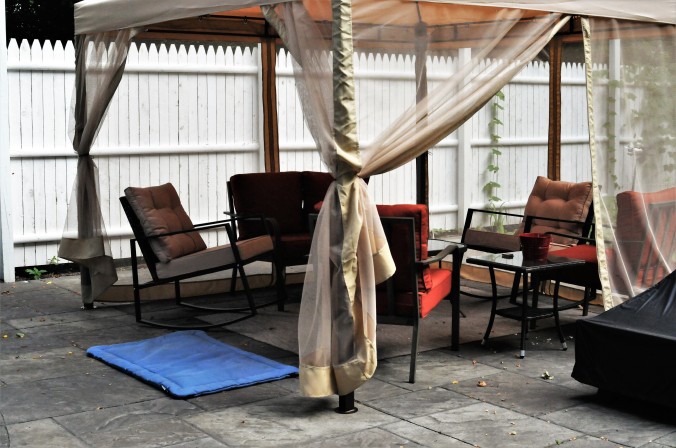 We love our new backyard digs (a little messy in this photo, but our outdoor ‘room’ cleans up well), and we’ve added a fire pit so we can enjoy being outside a tad longer into the fall. The mosquitoes are bad just now, thus the netting. But they’ll skedaddle on out of here when it gets cooler.

For his part, Scoutie’s enjoying ruling his roost, now so well defined for him. School starts in earnest up this way after the long weekend. But we have cicadas, y’all, and it is still summer.

2 thoughts on “Journal Entry: We Have Cicadas!”