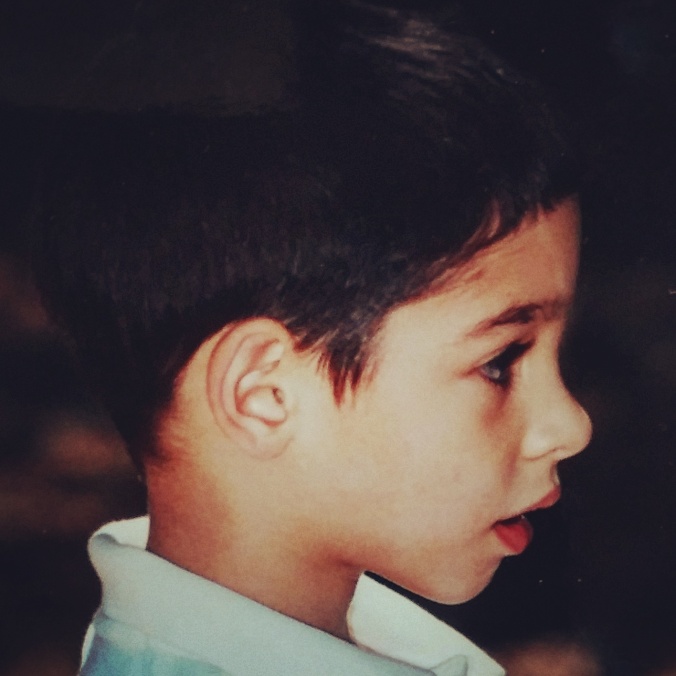 That’s my son in the photo at age five, in his school uniform, a kindergartener, a blank canvas, full of curiosity, and loads of energy, trusting of the people around him.

Something awful happened to him a few years later when he was a fourth-grader. The fallout from that incident was bigger than his dad and I could have anticipated and made a lasting impression on him from which it was impossible to recover in earnest for a long, long time.

It’s all water under the bridge now, kind of, as the saying goes, and he owned at least some responsibility for the consequences of his fourth-grader actions at the time. But even as a young man he still bears its thumbprint, faded though it is, evidence of profound losses that exceeded his capacity to fully comprehend at the time.

Neither did many of our friends understand; the ones who were true didn’t abandon us, as others did. And in all fairness to those who no longer wanted to be around us, I think they didn’t know what to do, or to say, or how to react, and  they finally found the burden of our friendship too great.

A short time later, when we were still fighting our way out of the morrass, struggling to pick up some big pieces and put them together as best we could, we found ourselves at a neighborhood cocktail party among close friends. I recall a dialog with one of them, a classics professor, who was listening to my still-fresh rancor about all that had transpired. I was angry, hurt, (mainly angry), and in true maternal fashion, über protective of the boy. I said I could never forgive the people I held responsible for the damage to him and to us as a family.

Really? he asked with incredulity. Never ever?

Never ever, I insisted.

Wow, he said—you are a much better person than I.

How? I wanted to know.

It’s a huge burden to hang on to for the rest of your life, he said, to never forgive them, even if they don’t deserve your forgiveness. I’d relent, he went on; I am way too selfish to want to bear that the rest of my life.

That sentiment gave me pause to reflect, long and hard, about my view of things. And honestly, I’d have dismissed it from anybody else, probably. But this notion of forgiveness came from the thoughtful mind of a scholar, a person I trusted, a compassionate friend. There was no aha! moment, no epiphany the next day, but a gradual, discernible melting of ice, an emotional thawing towards people I genuinely hated at the time. (I still don’t like them; it’s not requisite for forgiveness.) My friend was correct: the unwillingness to forgive is indeed a heavy burden to bear.

This Sunday evening I stand in profound awe of the people in Charleston, South Carolina, who have galvanized with a message of unity and civility in the wake of the church shootings, when their reaction could have been volatile and divisive. But I stand in the greatest awe of the families of the dead, who addressed the shooter directly with messages not of rancor, nor hate, but of forgiveness.

It’s still a struggle for me—I have to work at it, searching for the freedom forgiveness brings with it. Content as I am to leave the big questions to true philosophers, I still wonder how the world’s landscape would change were it dotted with that one thing, the possibility of forgiveness.