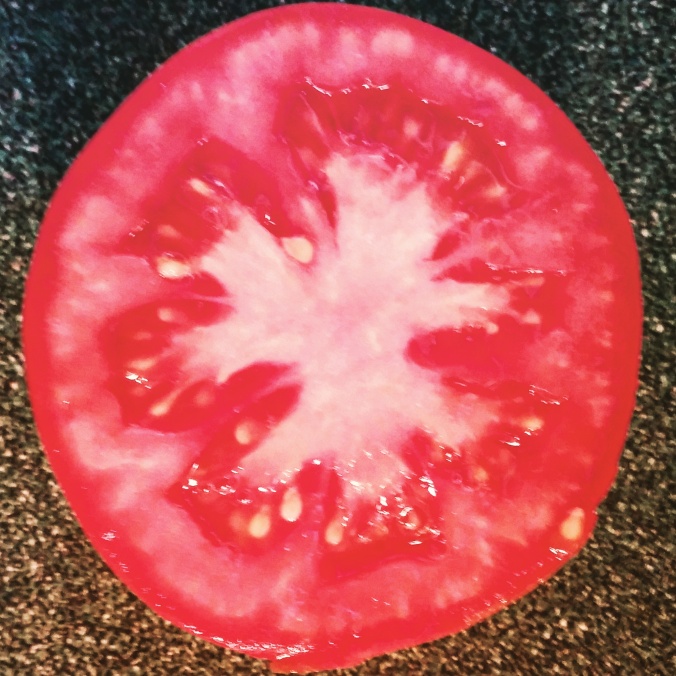 I think it must be a function of age and want. I don’t recall ever getting so excited over ripe tomatoes. And crispy local green beans. And fresh ears of corn just arrived from Georgia, and expensive organic strawberries like the pint I bought as a special treat last Friday, and my Sunday morning yoga class. Three years ago, at the threshold of big changes, I was driven by fear and survival (mainly fear), the rug freshly yanked out from under me; those feelings were reprised just last October. The fear remains, but with cautious optimism I am savoring ordinary things with renewed ferocity, things I once took for granted.

It’s also life in Vermont. I love so much about this place, but the jury’s emphatically out on others, to wit: the sun never gets quite overhead on a winter’s day, and darkness comes early. I hate that. Hate. It’s a strong word that should be reserved for occasions when one really means it, like now. And it would be just fine with this Southern girl if we got about a tenth the amount of annual snowfall we get here. And ticks and deerflies—they contribute nothing to the world order except agony, and we’ve got them in droves.

But there is salvation in that tomato, which is almost as tender and juicy and sweet as a Southern-grown tomato. Almost. And when I returned home from my delicious yoga class this morning, I made a delicious salad with it, and a number of other beautiful ingredients, many of them locally grown. It is nothing short of a miracle, in my humble opinion, that the farm I pass twice daily on my commute to and from work was harboring the infant version of that beautiful tomato in one of its many greenhouses, when I was still sliding all over the icy highway using my slow-to-improve Vermontish driving skills. (See fear, above.)

See what I mean? It does not take too much to get me excited these days. Like this salad I made—this salad is pretty dang exciting. 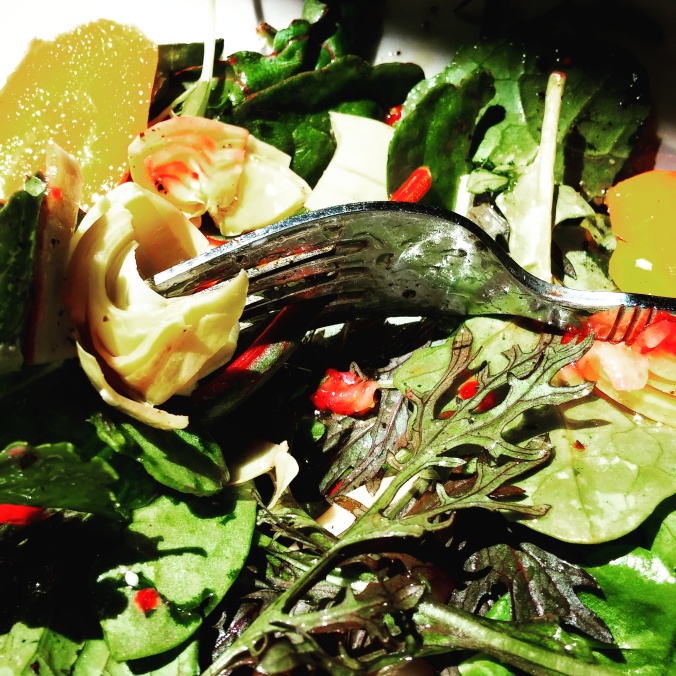 I will make another similar one and take it to a barbecue potluck in a couple of weeks. That’s exciting, too: being invited to a potluck with new New England friends.

And this is exciting: 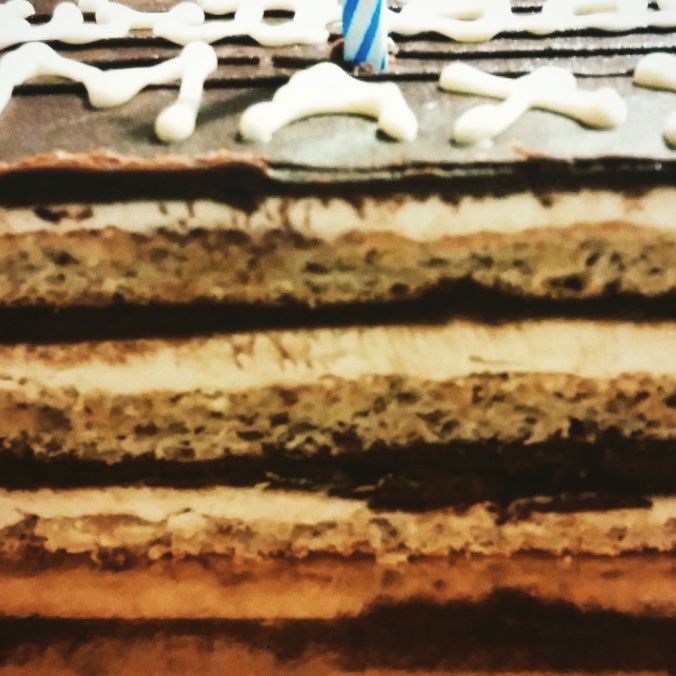 Those are the beautiful layers of pastry stratigraphy in the opera cake (yes, opera cake is a thing) Handsome Chef Boyfriend made and brought home for the second teenagery birthday celebration in the space of only a couple of weeks, this time for the 16-year-old. I think of it as high art. And I am duly impressed with HCB, not just because he can make something that gorgeous and delectable, but because he is also in a period of transition, self-motivated, doing some creative reinventing, moving into the culinary world of sweet after a long and successful career mainly in savory.

Which brings me right back to the little things. When you spend long hours on your feet poring over recipes, scaling out ingredients in a busy commercial kitchen, turning out beautiful baked goods right and left (things for which people sometimes drive long distances), you deserve some time to yourself enjoying the little things.

But HCB tends to latch on to the little things with even more ferocity than I.

Case in point: cake fails. You know the ones: once in a while some hilarious image of a badly decorated cake with raunchy pastry work and egregious grammatical errors floats by on social media. Sometimes it’s a whole collection of them, and I admit they often make me laugh. Yesterday I shared an especially awful one with HCB, which then inspired him to go find others. And others. And still others. This went on for some time; the giggling coming from the vicinity of his desk was contagious, long after I gave up looking at the cakes gone bad.

But then came the other obsession, the one that has gathered intensity of late: eBay.

It started innocently a few weeks ago with teenager number two and a particular piece of outerwear he wanted which costs a king’s ransom if you buy it off the rack in a store. Out of the question. So eBay it was: jacket located, auction won (hooray!), and we thought we were done.

Except when it came, it was not the material we thought it would be, and there was some question whether the teenager would like or want this particular version.

On to auction number two, where HCB once again enjoyed success, and the jacket was much closer to the mark. We gave the boy both for his birthday, and he seemed pretty happy.

Golf clubs, Super Mario Bros. toys (long story), Spanish saffron, car parts—he’s found all of them, and joyously, on eBay auctions. What I find the most entertaining about HCB’s new obsession with this particular flavor of e-commerce is his excited play-by-play description of what is happening near the end of an auction. It’s comical and endearing, even if I have to throw something at him to get his attention. Last night I said I would get a little bell and just whap it every time there’s a bit of auction news:

“I found a whole boxed set of Audrey Hepburn DVDs for you!”

“Wait, they’re from the UK, nevermind.”

Tomatoes, eBay, cake fails, deep snow, short winter days, sometimes-sullen teenagers, ever shifting planets. Handsome Chef Boyfriend and I are in it together, obsessions notwithstanding, and that’s no small thing.

2 thoughts on “It’s the Little Things”