We pulled the Subaru into our Vermont driveway late yesterday afternoon with another 2,200 miles on it, a couple of road-weary travelers we, still a little sugar-frosted from the beach and lightly crisped around the edges. I made it all the way to the Pennsylvania state line on Saturday before I fought back tears thinking about my boy, wishing I had more time with him. This is progress: usually the emotions well up in me much sooner. I think of this young man as unfinished business, not yet fully formed when our family came unglued in 2011; he still has a long way to go, and the road is fraught with peril, as a friend would say. The reality is I can’t guide him how I could if we were closer, and that weighs heavily on me all the time. But he looked and sounded good during our week together, and that is a joyous thing to see.

He’ll hate that picture if he sees it: mainly I got the palm of his hand when I reached for my camera. It’s too dang bad. I am entitled to a few mama privileges, which happen to include indulgent squeezes, sloppy cheek kisses, and unsolicited photos. I like that one. 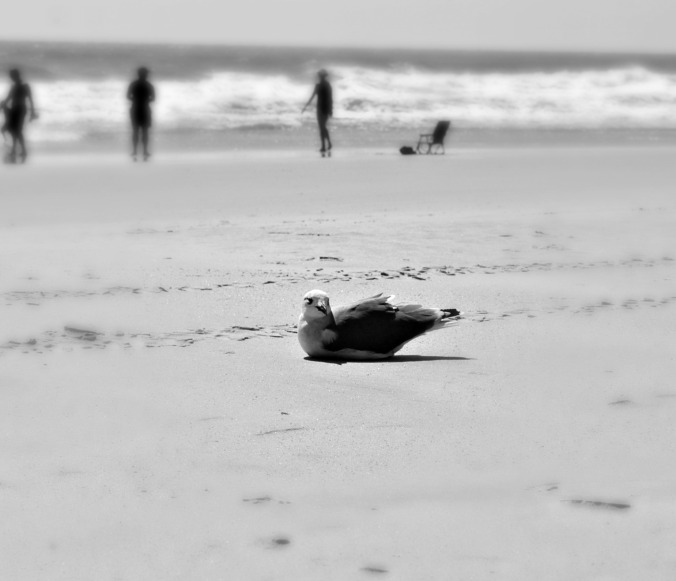 I enjoyed toying with black and white filters and special effects last night. That was our final beach day, Friday. I completely overlooked packing a kite, thought of everything else—how could I have forgotten that essential piece of beachy fun? So I occupied myself with an unknown beach goer and his own kite-flying skills, impressive, but the wind I think would make launch pretty easy even for a novice. We felt a little of tropical storm Julia’s punch during our week in Wilmington, but the beach is always windy—it’s exceedingly gratifying, flying a kite at the beach—it makes you feel accomplished, and with so little effort.

This marina on the Intracoastal Waterway kept us company during our late lunch. We had fun imagining how stupid rich one must be to own and maintain boats of the size we saw here.

Our last day in Wilmington ended with a planned outing to Fermental, a wine and craft beer joint where The Catch food truck was scheduled to purvey its acclaimed food; HCB and I had researched this well in advance and anticipated the evening with something approaching fanaticism. I foolishly believed the young man in tow would relish it too, but in no time flat he declared the live music in the garden behind the place too “touchy feely” and took off for our car across the street the instant he finished his spicy fish tacos.

We oldsters liked the touchy feely music just fine and stayed for a song before we abandoned ship. But the food truck had disappointed us—the kitchen staff ran out of a couple of entrées early, were slow getting out orders, and the truck’s power failed repeatedly during service. All avoidable, according to the chef sitting at my elbow, who critiques food the same way I do ballet. Too bad—this food had the highest potential for greatness of any culinary outing during our brief time in Wilmington. But it was still a beautiful evening, food and touchy feely music notwithstanding, if a bit wistful with the end of our vacation week in sight.

There’s the boy, wearing a striped shirt and standing next to the chef awaiting our order. And here is the boy with his mama, at our beach rental a moment before we said goodbye ’til who-knows-when:

Way Down South Trip postscript: On our first day of travel navigation lured us into Washington’s E-ZPass Express Only lanes in her most sultry syntha-voice, where we traveled for many miles. We understood our mistake too late, but HCB’s quick thinking saved the day: if you own up to your mistake and settle your debt right away on the Interweb, the highway gods will spare you some stiff penalties. Nice try, Ms. TomTom, but we’re wise to your ways now. The moral to this story? Navigation sometimes leads you astray when you most need instructions in black and white.