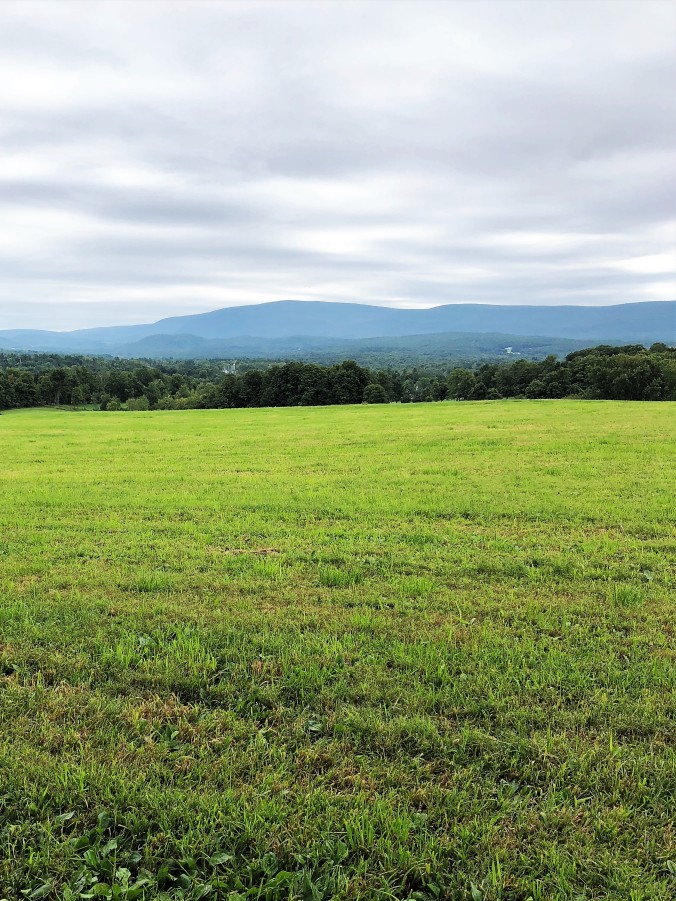 The Top Meadow at Mile-Around

And the days grow notably shorter.

It had to happen eventually, I suppose. But the poison parsnip is dead, and good riddance to it. “I don’t suppose your leaves have started turning yet,” mused my dad at the other end of a cell phone connection about a week ago. “No,” I said, “but just last Friday I caught something out of the corner of my eye as I sat in my second-story home office perch, and turned in time to watch a few small yellow leaves flutter to the ground.”

Now there are distinct patches of red coming in trees across this southwestern quadrant of Vermont. And soon that four-letter word that inspires joy in some but dread in others will blanket our verdant landscape.

“It’s not fair,” I told Chef David yesterday, “that nature hands us palpable signs of change at the end of summer. You know: beautiful foliage—the harbingers of autumn, and all. But in the late winter and early spring, when we know darn well that things are moving around in the frozen ground beneath us, and there’s scientific stuff going on inside the trees, she gives us zip—nothing but Still Winter.”

The Chef giggles and shakes his head. But I am serious—this characteristic of the cycle of life here on earth is unfair, gives you nothing to hope for.

This morning was the first one since spring that called for a sweater. I pulled on a fleece over my stretchy yoga clothes before I headed to the gym. I’m a seasoned enough Vermonter now, I suppose, to know better than to put away all my layers in the spring, so there were a couple of warm jackets hanging by the back door. Anyway, I was plenty sweaty after class and temperatures in the 80s are promised again later in the week.

So you can just hold your horses, fall.

Still, yesterday started cool enough I decided I might try to take Scout for a run, after his wonderful vet urged me to quit asking this “heavily muscled” doggie to run in the heat. Fair enough. But right when we reached our beloved Mile-Around Woods, we bumped into a nice human with a pair of friendly German Shepherds, and so while Scoutie and the shepherds romped joyously in the field, their human and I had a longish chat about shepherds, breeders versus rescues, dogs from our past, et al. I told her about my Unfortunate Shepherd Incident, now almost two years ago, and she said, “I hope you won’t give up on the breed because of that one dog.” 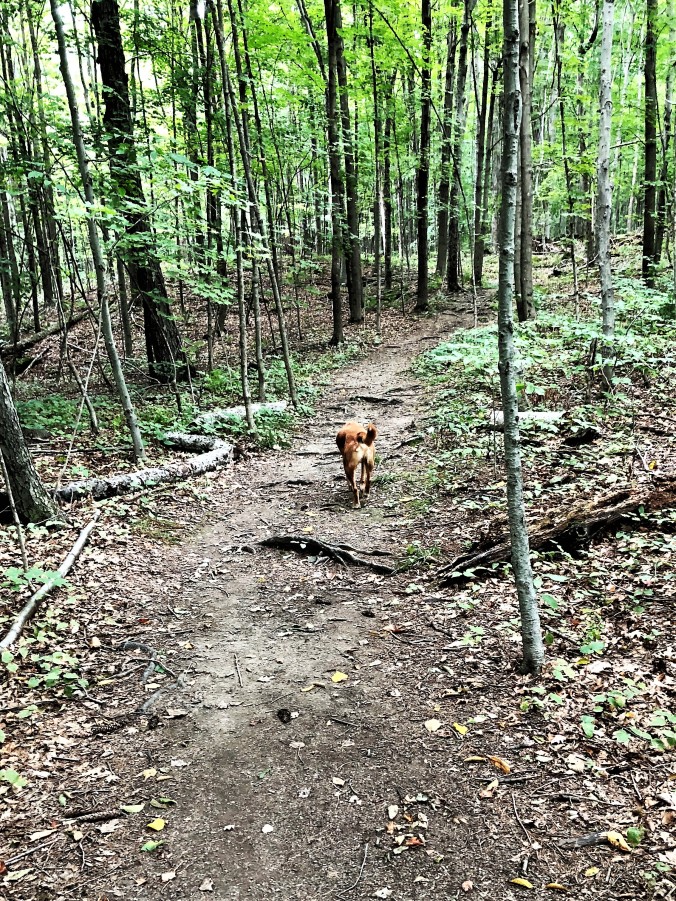 Magical Woods for Creatures Who Go on Two Legs or Four

“Nah,” I said. “But right at this moment that doggie <pointing to Scout> is a perfect fit.”

And then just about when we were disconnecting from lady-and-shepherds, here came the unmistakable sound of a small cowbell, attached to one Alfie-the-dog, with his person Kim in tow, whom we’d just met a couple weeks back. Alfie and Scout knew each other already from dog camp, turns out, and so were a step ahead of the game while his Kim and I caught up on the meet-and-greet. Alfie is a big and lanky dog, a Spinone Italiano, with the best eyebrows I’ve ever seen (he looks pretty much exactly like the brown dog in the picture if you followed the link). But although Alfie is distinctly taller and longer than Scout, I’m guessing he does not weigh substantially more; the two seem to be perfect chums. So after Kim’s impromptu invitation we did a three-mile romp around the woods together, both dogs joyously unleashed and <mainly> well behaved. 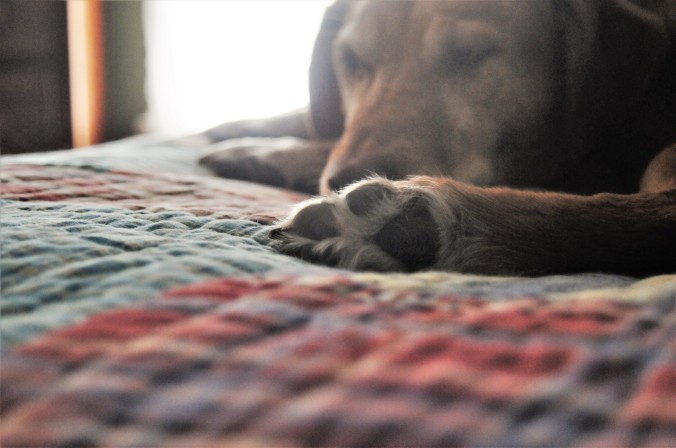 Mile-Around Romp Calls for a Nap

Meanwhile, back at home. Out and about the house we still have blooming and growing things. What summer in our new-old Vermont house has taught us: 1) there is no exceptionally great spot in our big back yard for a vegetable garden, and 2) our best bet next year will be vegetables grown in containers on the back deck. Mainly as an experiment, in the spring we snapped up a galvanized tub at the Big Box Store from Hell, for about eight bucks. This is a thing meant for ice and bottled drinks at your summer party outdoors, like you see in the lifestyle commercials showing somebody’s imagined summertime vignette, definitely not ours. It is attractive enough, anyway, fairly deep and with two brass handles. The Chef drilled a few drainage holes in the bottom, and then we dumped in some potting soil and jammed a pair of young tomato plants into it, and to our delight they grew tall and strong and gave us tomatoes this summer—better than light beer any day of the week. Looks like we’re down to one or two tomatoes now, and that will be all for the season.

The hanging baskets I made back in the spring have somehow thrived, against all odds. We’ve spotted a few hummingbirds visiting the red thingummies I put in the middle of the planters, but I feel bad for them, like I’ve somehow tricked them: there can’t be anything a hummingbird could possibly want in those plants—sort of like those dessert carts some restaurants roll out with the fake wax versions of actual dessert. Psych.

The Chef is more than halfway through an ambitious project to build a fence where one did not exist, and to replace the ailing decades-old sections where it did. The first part of the project is about finished; he put in the posts some weeks ago, and then true to his ways waited for the fencing style we wanted to go on sale at our local Big Box Home Improvement Store, and for the picked-over and busted-up inventory to be replaced with fresh. After the store messed up our order, and the Chef helped them see the light, we ended up with what we wanted in the first place, and for less than we would’ve spent had they gotten it right to begin with.

When the Paint Runs Out

It’s a work in progress: relatively boring stockade fencing will get shiny copper caps on each post, and then hanging baskets will extend from special hardware affixed to the posts—that part will happen next spring. This fall maybe we’ll plant mums along the fence row, and then add mulch to dress it up. But the big win for us already is the new privacy we’re enjoying. 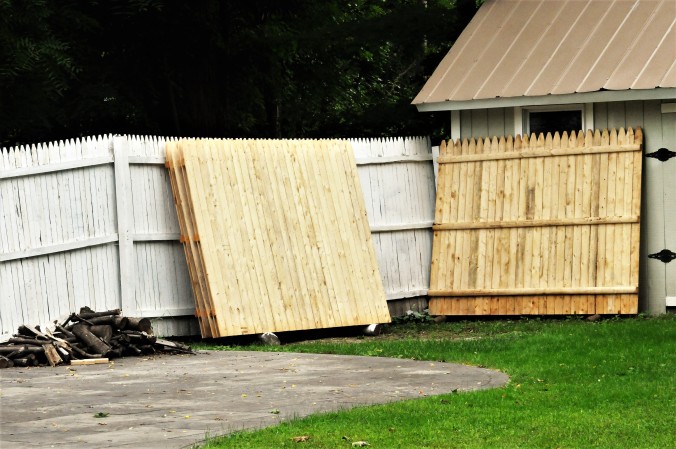 The other outside project will be the new landing at the bottom of our back deck steps, after I slipped on the icy, uneven paving stones that had been there last February, and banged up my hand pretty badly. I found some sea glass from the Baltic Sea on Etsy, and it arrived last week all the way from Latvia. We’ll pour cement into the L-shaped frame Chef David made that leads from the bottom step to the garage door, and then we’ll press the pretty glass pieces into it to make a mosaic-like border. Then we’ll use different-shaped sea shells to imprint the cement in the middle of the slab. 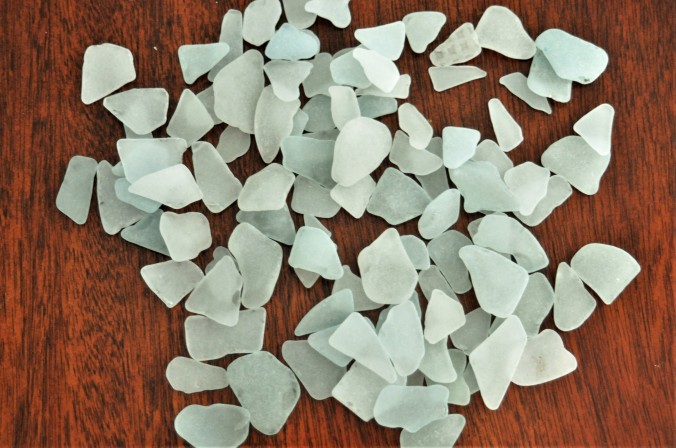 Inside the house I’ve been busy unearthing and hanging artwork—I spent all of Labor Day working on this fairly time-consuming project, making substantial headway, and with relatively minor cussing. I am especially happy about a grouping of meaningful photographs I arranged above our bed. And I am happier still the Chef does not object to an abundance of ballet-themed artwork, which describes most of the artwork I brought with me from my erstwhile home in Knoxville. The Chef has some groovy food-themed art as one might expect, but also a Norman Rockwell print (every Vermont home needs one), with a stranger-than-fiction backstory, about a person he knew who found the original and several others inside a wall in their house. 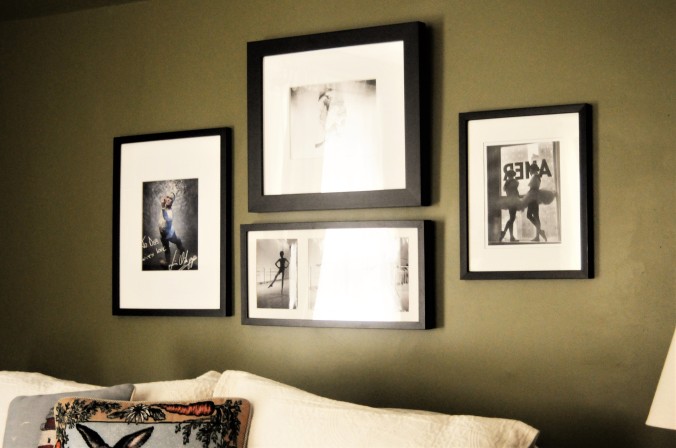 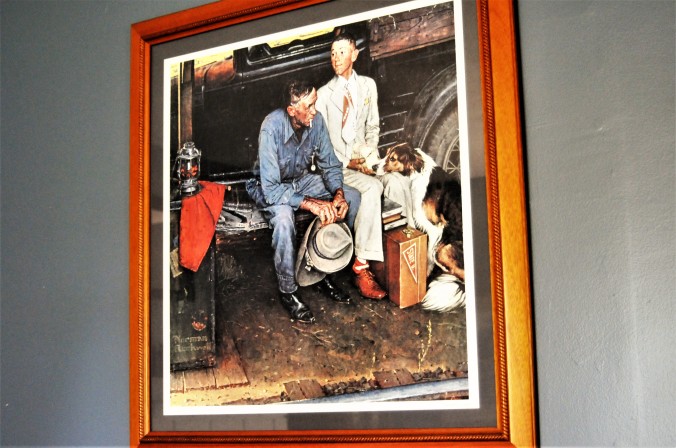 I continue my campaign to keep fresh cut flowers throughout the house. Stems can be had cheaply at the Choppah (Price Chopper for my readers down South). I usually walk out of the store with my arms full of them and then spend about a half hour or so fussing over them when we get home from our Saturday shop. This is a bit of luxury from my former life I’ve reclaimed in the last two or so years; it never ceases to amaze me how a thing so seemingly inconsequential can make such a big difference in the feel of a room. And in a Vermont winter, when it’s dark outside before 5 pm and you must spend more time staring at the walls inside a room than out of its windows, you sure as heck want a space that invites you to stay. 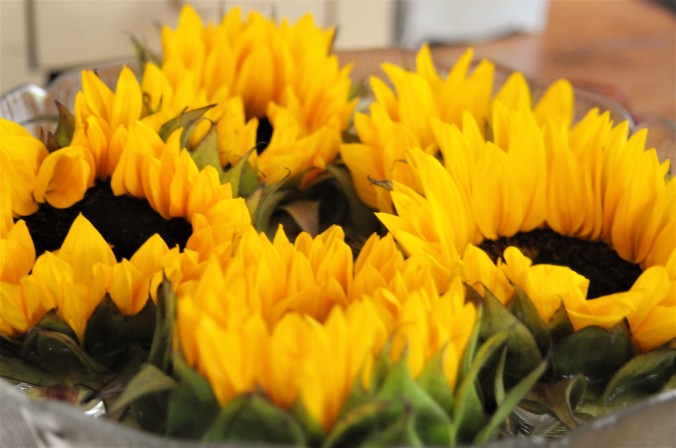 Bells of Ireland in Our Kitchen Window 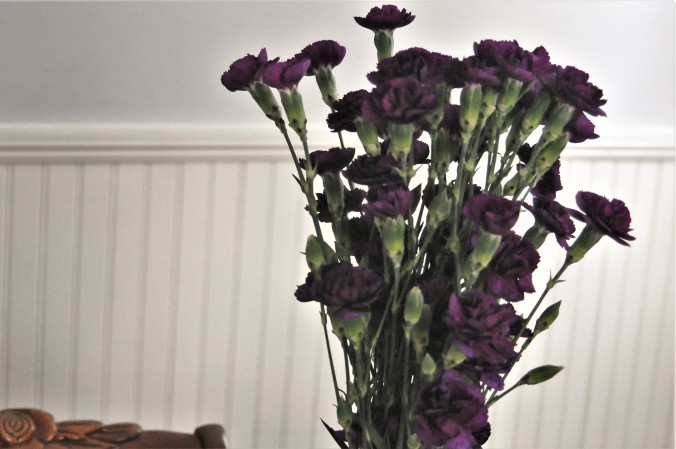 I arranged my collection of exquisite pottery my beloved friend Bett made across our fireplace mantel (all save one piece on the end, a cookie jar by Memphis potter Ellen McGowan); we more or less finished that end of an oddball room that is hard to arrange, with the Chef’s grandfather clock in one corner and a mirror that came out of the ballet school in Knoxville over the mantel. A glass of wine, a warm fire, a good book, a dog at my feet, and the Chef creating something fabulous in the kitchen, of course: those will be plenty inviting come fall and winter. I leave you with what I’m reading at the moment. First, an older read on my Kindle: John McPhee’s 1989 The Control of Nature. And two new books in hardcover, David Sedaris’ Calypso, as poignant and comical as you’d expect but with a serious undercurrent after losing a sibling to suicide, and Jamie Bernstein’s Famous Father Girl: A Memoir of Growing Up Bernstein. 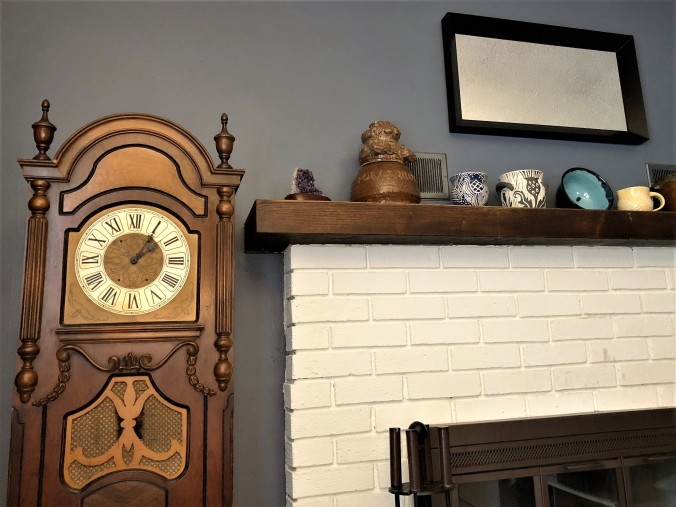 How will you celebrate the changing seasons where you live? Read any good books lately? Holler at me: I’m all ears.

2 thoughts on “Journal Entry: The Earth Grows Restless and Begins to Shift”