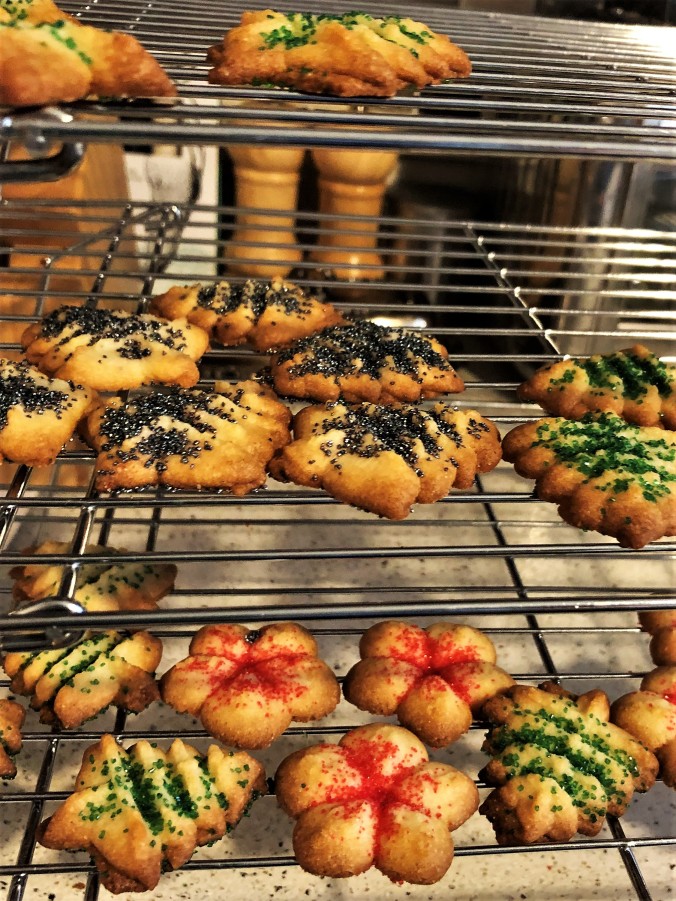 Today when my irreverent twenty-something video messaged me, I explained I was making cookie press cookies. He watched me mix in the flour and work the batter until the dough was the right consistency to extrude through the press. I said the last time I used this little device he was still in elementary school, and lamented he wasn’t here now to make cookies with me.

“Yeah, but it pissed you off because you couldn’t get it to work right,” he quipped without missing a beat.

He knows me too well, but I admit his memory on this one surprised me. The occasion probably stuck with him because I cussed. Today I got the dang contraption to work, and then it didn’t, and then it did, and so on. And then my hands were so greasy I had a hard time swapping out the die to create different cookie shapes. Mostly I extruded globs of dough that refused to stick to the Silpat on the cookie sheets, so then I peeled it away from the press and tossed it back into the bowl.

Then I got the red and green and silver decorating sugar all over the place, a thing The Chef noted. I’m sprinkling sugar, I protested, so it gets, you know, everywhere. Then he showed me how a pastry chef sugars cookies, and of course the ones he did were damn near perfect. He left me to my sprinkling and went back to his football game.

But when the cussin’ started in earnest he came back into the kitchen and rescued what was left of the cookie dough, and managed to finish squeezing out the little shapes. But even he struggled with the vexing cookie press. And while he was helping me with one sheet of cookies, I managed to burn another, because I thought I’d set the timer, but evidently missed poking the ‘start’ button.

The Chef explained how much he likes cookies with burned bottoms, which is sweet, because I know this is a lie.

Anyway, my final assessment of cookie press cookies: they’re too damned much trouble for what you get in return for all your effort. And my time trying to make the cookies served mainly to make me feel bad about myself, for my lack of patience—the ‘P’ word Chef David reminds me all the time is the most important ingredient in preparing cuisine. (Patience be damned, the cookie press will go into a yard sale.)

We are each of us imperfect, after all.

We spent Thanksgiving Day over in Brattleboro; this time we did the lion’s share of cooking so David’s mama could stay put, and so that her beloved friend, and her friend’s brother, could join us at the table. David’s big brother was there, too; he made the trip down to southern Vermont from way the heck up in Saranac Lake, New York, where he lives, and where snowfall is measured by how close it comes to the eaves of your house. Last year we had a gigantic catered Thanksgiving, where pretty much every member of Chef David’s family, and a few friends who count as family, came together from all over the country. So this family Thanksgiving was rather quieter and much smaller by comparison.

David’s mama has an exquisite collection of cobalt glass

David did the heavy lifting to be sure, but I threw in my cranberry sauce (a Martha Stewart recipe, pre-prison, as I like to say), and a decadent stuffing I make about once in five years, that calls for a cup and a half of Grand Marnier liqueur. It is so good it makes you want to kill yourself, and I sure didn’t hear anybody complaining. 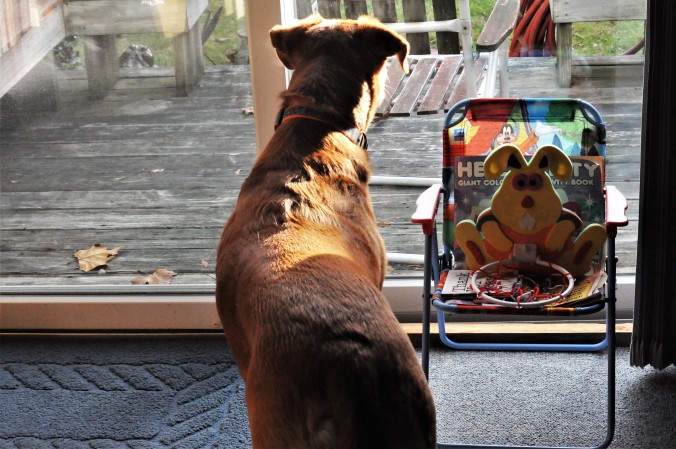 Scout loves visiting David’s mama’s house, where he can stalk squirrels for hours

Every time I’m at David’s mama’s house I think of something one of their beloved family friends, now gone, once said of the family: “They take you in—kind of absorb you.” It’s true. But I also missed my own family, so far away, and especially my kiddo, who won’t be in a position to travel up this way any time soon, nor would I let him try it in a Vermont winter.

I managed to capture a series of photos of Chef David (he’s the tall one in the stripey sweater) and his brother Stan, trying to decide how to convince a Rubbermaid mold to unhand a congealed cranberry salad their mama made. I had to suck in my cheeks not to giggle at the spectacle—a professional pastry chef, and his older brother, debating the best course of action to avoid ruining the salad. 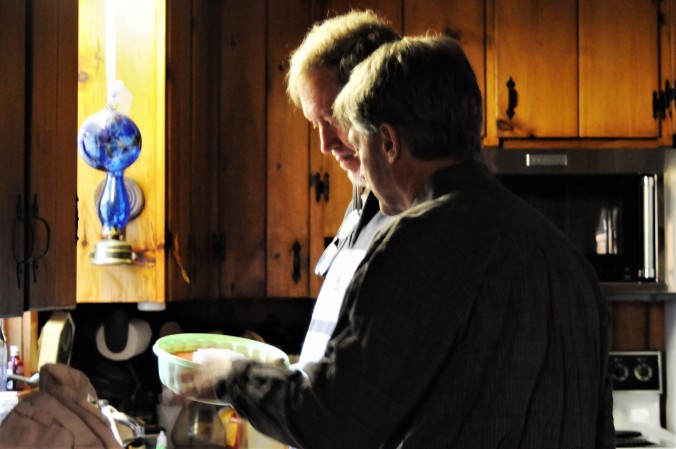 Looking at the table before we sat down to eat I thought about all the families represented in the dishes on it: there was the platter we brought for the turkey, a wedding gift from my marriage, given to me by a pair of kind and charitable extended family friends who had known me since I was about seven or so, both of them gone now. And there was a cut glass dish that came from my dad’s family, holding the pre-prison cranberry sauce. And the pie plate we used to serve David’s raspberry pie belonged to my great-grandmother Gracie, on my mom’s side of the family. And of course all the dishes from David’s family. Wouldn’t it be something, I thought, if all the families represented here in this china and silver and cut glass and Pyrex and everything else, were seated right here at this table with us on this Thanksgiving afternoon. (If my great-grandmother Gracie were among us, I guaran-dang-tee there’d be some colorful language; she had a tough time with filters.) Anyway, I’d have a few allies to help me convince everybody to say the word ‘pie’ as one should, like this: pah.

But on this Thanksgiving, we laughed and talked at length instead about the family camper David’s resourceful dad made out of a repurposed Arnold bread truck; his mama explained in exacting detail every square inch of that camper, and how they made do in it—two grownups and four siblings—on ambitious cross-country treks (all the way to Alaska and back home to New Jersey on one occasion). We pored over photos of the camper, and the crazy driftwood tied to its front grill, and those of us not there in the photos tried to guess who was who among the children.

I took a vacation day on Friday, but ended up doing some work anyway, because I realized I’d missed a project deadline for one of our clients. I treated myself to this exquisite sandwich for lunch, made of thin layers of every kind of Thanksgiving leftover that followed us home, and bread I ordered from a favorite bakery down in Knoxville. 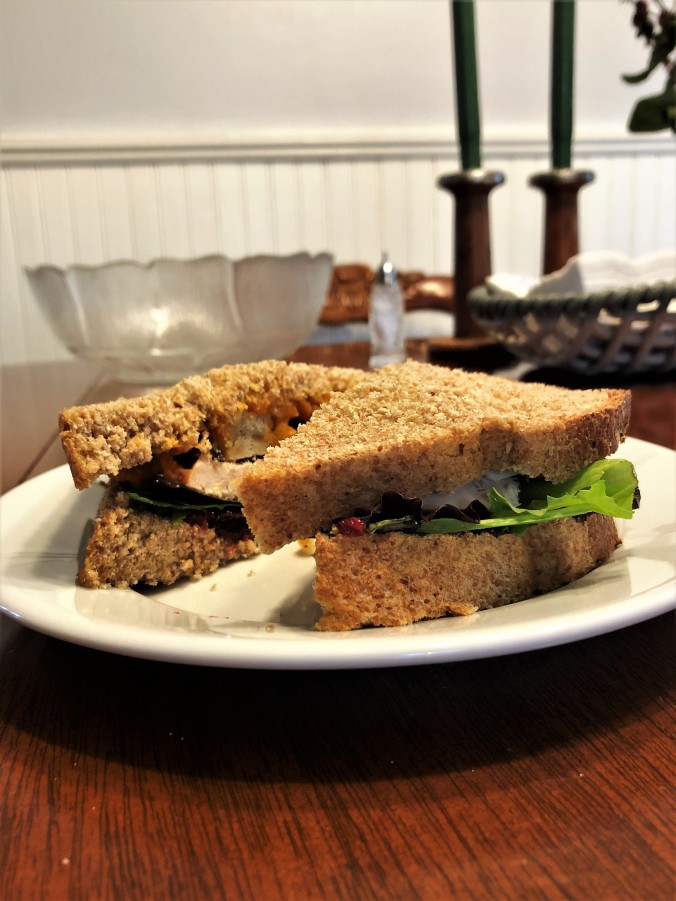 And then last night David made this beautiful supper of freshwater salmon a friend gave us, plus copious Thanksgiving leftovers.

Yesterday we accomplished a boatload of errands ahead of the first big nor’easter of the season, which is pounding us as I write, although I’m trying to ignore it. The Chef’s beer league hockey game was called off tonight, and there’s no school tomorrow. I started my day with yoga (as taught by my favorite yoga teacher, who makes going to the gym worth one’s while), a thing I need more of now that I’ve amped up my running. And after I cleaned up my disastrous cookie mess, I made a pot of chili.

We cut our Christmas tree at a local tree farm yesterday, and now it’s up, awaiting the trimming. I decided I’d make a decoration for the front door this year instead of buying a wreath, using the limbs we trimmed from the bottom of the tree and a pretty bow. Then I’ll add my authentic sleigh bells to them, which will jingle every time we open the front door. They’ll make me think how they sounded outside my Knoxville home on Christmas Eve, enough to convince one little fellow in his sunny yellow bedroom upstairs that he needed to sleep before Santa could come—and the bells were proof positive he was already in the neighborhood.

The plow trucks have been up and down our road a couple times already, and if I had to guess, I’d say I’ll be working from home tomorrow. I’m thankful, as ever, for that and so many other privileges I enjoy, including sitting in front of a beautiful fire as I write. And raising my glass to all the family ties—blood relatives, and the special people in our lives who are as much family as anybody else—on this first night in December.