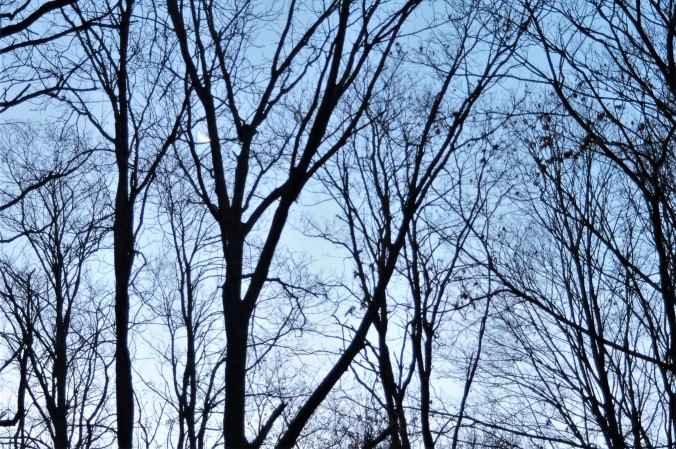 In a recent video chat with my irreverent twenty-something, I mentioned I’d heard a song on the radio that really resonated with me (it was a Blues Traveler song, in case you’re wondering), and after several days with that earworm, decided I must have this music, in spite of the negative review one critic gave it. I listened to a few seconds of every track online before I clicked ‘order’ and decided the critic was crazy and unfairly, er, critical when he wrote something along the lines, At least the guy plays a good harmonica for somebody in a jam band. I am paraphrasing, but I digress.

Anyway, the chat with my kiddo went more or less like this:

Me: I’ve had this song in my head for a few days. It’s a really catchy tune, so I decided I needed the entire album. I bought the CD.

B: <distracted by something else, now looks directly into his camera at me> You bought a…CD?

He has a naturally impish face (really, it’s quite an adorable face, not that I’m partial), but at this point I could see one eyebrow raised and half a smile emerging, which played up the ‘impish’ quotient even more.

Me, borrowing one of his favorite expressions: Don’t hate—I’m old school.

B: That’s not old school.

Me: What’s old school to you?

Me: Don’t you sass your mama. Of course I know what vinyl is. What do you think I listened to growing up?

B: <eager now to get past a looming history lesson> You do know about Spotify, right?

Me: Yes, but the freebie account is limited and I refuse to pay a premium for music that lives on a server somewhere, that I can’t touch and feel and hold in my hands. Or lend to somebody to listen to.

Me: Oh, never mind. The CD will be here tomorrow.

I don’t fault the kid for finding me old fashioned and thus flawed; some day, somebody will think the same about him. And really, he’s right: I need to get my music library better organized and find a way to jettison some of the CDs I’ll probably never, ever listen to again, and thus create more space where it’s needed. But since Apple is doing away with the iPod, I hear (and so it’s only a matter of time before they announce they’ll no longer support iTunes), and because I have a fair amount of music already stored there, I find myself in this in-between techno zone, trying to figure out the best solution for how to deal with my ever-growing music collection.

And anyway, whatever happened to that satisfying thing called the mixtape? (Remember that scene in Eat Pray Love, where Julia Roberts gets knocked off her bike and into a ditch by a disarmingly handsome Javier Bardem, as he is stooped down to his car dash to fool with his fouled-up mixtape, and you just know the moment represents her destiny?) I used to make them all the time. And then after CDs became mainstream, and Apple revolutionized music accessibility with iTunes, you could create playlists to your heart’s content and listen through the iPod, or burn them to new CDs. So now, I guess the streaming services just do that for you, without need for a bothersome little plastic disc. Thing is, my reasonably impressive stereo system can’t talk to any of the streaming services, because it is…old school.

Until I get it all sorted out, I’ll keep on buying CDs, which are three-dimensional and thus reassuring.

Change can be bad, gentle reader.

In many ways I’m my father’s daughter, a thing his lovely wife pointed out when we were way down South for a Chattanooga visit this past July. Dad had pulled out a number of family photos—nay, relics—to show me and Chef David, which we pored over and discussed at length. In the intervening months he’s made copies and sent them to me as promised, although I still need a seating chart, a thing I reminded him last time we talked. All the subjects in these photos are related to me in some way, but once you go back a couple of generations, say, past my great-grandparents, I’m lost.

This, by the way, was far and away my favorite of all the photos we studied. It’s those two dark-haired women in the front, nos. 2 and 3: Are they not the most Goth-looking ladies? Maybe a little naughty? Perhaps out of step with time? As I told my dad, I can totally see those two tatted and pierced in the here and now.

These people did not have Spotify Premium accounts.

As I was saying, change is bad.

Until one day it isn’t.

I had a day like that yesterday. Friday night I slept fitfully, until 2:30 am Saturday, and I didn’t sleep beyond that at all. This was owing to one Chef David’s annual pie run down into the southern parts of New England, where he and a trucker (semi trucker) deliver 8000 scratch-made pies from the bakery where David works, to various organizations who sell them at fundraisers. This year there was the trucker, another driver (also a trucker) who rode shotgun, and then The Chef drove separately to help sort things out at each stop along the way. It’s an exhausting weekend that happens every year before Thanksgiving week, but The Chef does it every year without complaint. (Okay, there is possibly some complaining.) But he must launch around 3:00 am on Saturday to make it to the first stop on time a little later in the morning.

I have a hard time sleeping without the tall chef right there next to me. Scout stays put in his spot down at the foot of the bed, and his canine snoring is its own kind of reassuring. But the triangle is simply broken without the third line. I finally threw in the towel and pushed myself out of bed around 6:00, and went downstairs to start a new pot of coffee, since the 3:00 am coffee was undrinkable.

A tawny canine followed me, and suggested he needed to go outside, stat. So with the coffee all abrew, the two of us headed out into an absolutely glorious morning. No clouds to speak of, but it was cold as heck outside. After we came back in I started making biscuits, a thing I do every Saturday morning. But this time I kept an eye on the western horizon, because I suspected I might be able to witness that magical instant when the sun crests the ridgeline to our west.

After folding the cold butter into the dry biscuit ingredients, I checked again. Not yet.

Then I added the wet ingredients and stirred the batter. Still no sunrise.

I mixed and kneaded the dough and turned it onto the board. The morning grew brighter, but still no sun.

I turned on the oven, rolled the dough and cut out the biscuits, placing them evenly on the baking sheet.

I decided to go into the living room and switch on the news. Soon I noted a familiar glow cast upon our eastern fence line, grabbed my camera, and headed back out into the cold morning. Here is what I saw. 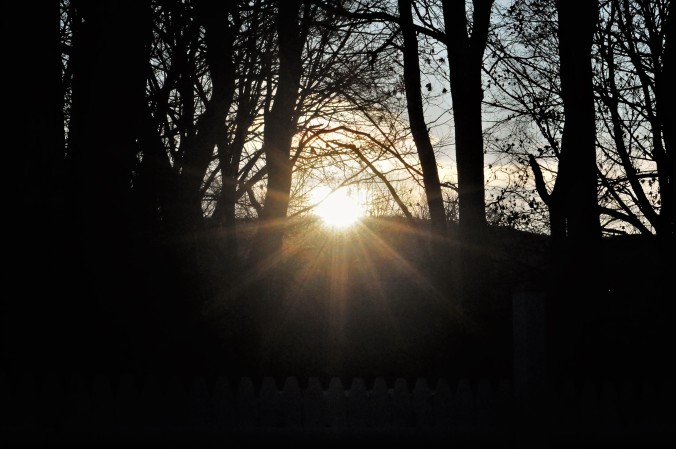 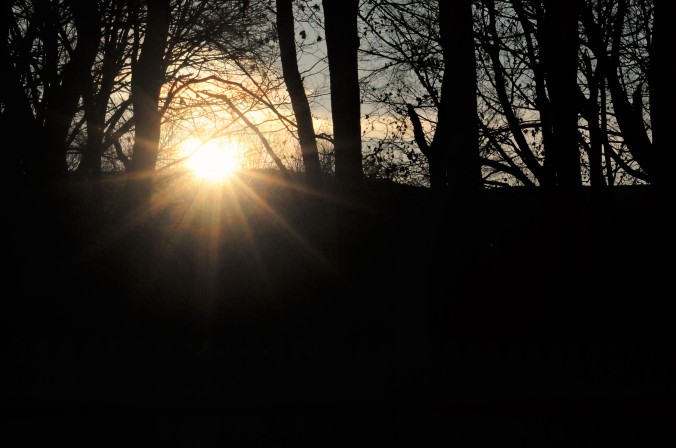 Scout had his annual checkup on Friday, and a few routine vaccinations. Saturday morning I was unsure whether he’d be up for a run after a full day at camp, and then some bloodwork, and the injections. I was willing to give him a break until later, but his body language said, C’mon-let’s-go!

And so we did. We had an exquisite early morning run in our little Vermont hamlet and returned home to the aroma of just-baked biscuits in the kitchen and a sunny day ahead; only thing missing was The Chef. Soon thereafter the phone rang and when I answered, it was Scoutie’s wonderful veterinarian. Good news, she chirped into the phone: blood panel looks great, no tick-borne pathogens at all, stool sample is clean for parasites—he’s pretty much perfect! 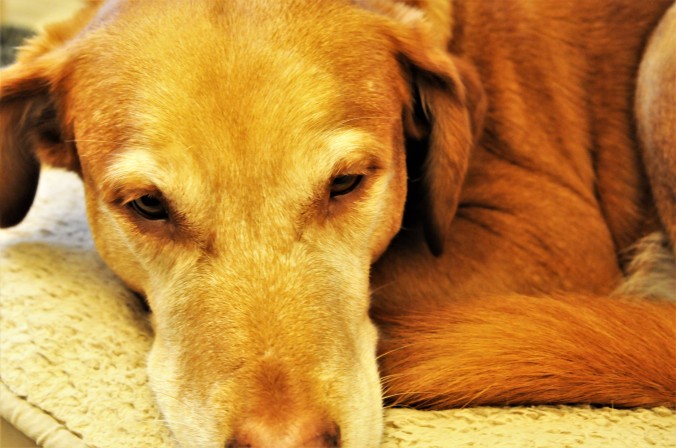 I’ll take pretty much perfect. And an obscenely early Saturday morning, and some other changes I’ve embraced in the last couple of weeks in my own life, all of them for the best. The Chef came home tired in the late afternoon, in one piece, glad to have this annual trek behind him. We were beyond happy to see him.

Change is bad, until it’s good, but I still refuse to buy *yet another* digital subscription. The Blues Traveler CD is fantastic, by the way. Oh, and, Dad: Don’t worry—I’ll digitize all the photos. Just waiting for the seating chart.

I leave you with a jam band whose front man and harmonica player is…pretty good. So much to love, so much gratitude.

2 thoughts on “Journal Entry: When Change Is Good”